From Paris to Boston, the crucial role of fire chaplains - EduBlog.News

From Paris to Boston, the crucial role of fire chaplains

Chaplain of the Paris Fire Brigade, Jean-Marc Fournier, is credited with saving several items of great significance – such as the crown of thorns – from the Cathedral of Notre Dame as it burned.

Previously a military chaplain in Afghanistan, Fournier also cared for survivors from the 2015 terrorist rampage at the Bataclan in Paris that killed more than 100 people.

Fournier is not alone in placing himself at great risk in service of others. Mychal Judge, the first casuality of 9/11, was a Catholic chaplain to the New York City Fire Department. 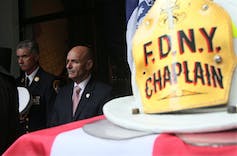 Although rarely seen by those on the outside, fire departments across the country include chaplains. They provide care to firefighters, family members and members of the public in a range of crucial ways.

Regardless of their own faith background, they typically work with people of all faiths and beliefs, outside of traditional congregations or parishes.

Historically chaplains were required in the military, federal prisons and the Veterans Administration.

But as congregations shrink and growing numbers of Americans move away from organized religion, it is chaplains that are often doing the work of spiritual care.

Chaplains these days are mostly present in health care settings such as hospices, hospitals and some nursing facilities where people are more likely to need end-of-life spiritual care.

They are also to be seen in airports, seaports, car racetracks and in areas where disasters have struck. There are chaplains even for pets and their owners.

Some chaplains have graduate degrees and extensive clinical training while others may not.

As scholars of contemporary religion and its practice, we interviewed 65 chaplains in a range of sectors over the past three years and spent time with fire chaplains who work across the greater Boston area.

The Boston Fire Department appointed its first chaplains in the early 1900s and since then chaplains have served continually in the Mass Corps of Fire Chaplains. Over the course of the 20th century, several of them have put themselves at great risk to serve firefighters and others in need.

During the 1942 fire in Boston’s popular Coconut Grove nightclub in which more than 450 were killed and 160 injured, chaplains were a steady presence and served in whatever way was most helpful.

In another devastating fire in Hotel Vendome in 1972, in which nine firefighters died, James Keating, Catholic chaplain to the fire department, crawled into holes dug in the rubble to administer last rites to two of the firemen who had died in the collapse.

In 1973, Father Daniel Mahoney provided support at Logan Airport when a flight crashed, killing all 89 on board. 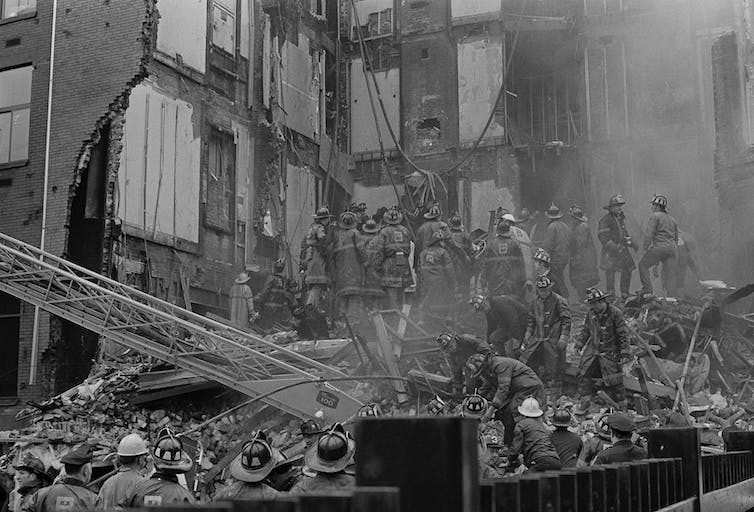 Boston firefighters dig through a mound of rubble in the Hotel Vendome fire in 1972. AP Photo/Frank C. Curtin

In 1983, Father Maloney entered Temple Tifereth Israel in Everett to save the precious Torah scrolls during a fire. Like Fournier in Paris, he took an extraordinary risk to save religious items. Massachusetts Corps of Fire Chaplains later honored him for his distinguished service.

Fire chaplains also serve firefighters and their families when they are sick, getting married or have other needs.

In our interviews, one fire chaplain described blessing the bodies of firefighters killed in the line of duty and accompanying their families and coworkers through memorial services and months of grief. He explained how chaplains try “to bring some solace,” when there is loss of life during a fire. “Whether it’s through prayer or just chatting with them or .. blessing a body – the whole entire reverence that takes place at that time is important,” he said.

Chaplains help firefighters cope with other difficulties as well. Witnessing injuries, losing colleagues in the line of duty, or recovering the remains of fire victims all take an enormous emotional and mental toll on firefighters.

“Chiefs appreciate our role,” one reflected, “I look at the scene and I have been around long enough to assess this is going to be a three-hour operation so it is worth rolling the rehab truck up.”

Sometimes this includes being a resource for fire victims. One chaplain remembered a time when the fire had been put out and everyone was ready to leave. He said, “And there is one man who lived there and he was waiting,” as the Red Cross had not shown up yet. He recalled thinking,

“I can’t walk away and just leave this man here by himself. So I sat there with him for like almost two hours before the Red Cross finally came. No one even really knew that I did that and that is one of the things we do. We are silently there and do what needs to be done.”

Chaplains are a central, if often overlooked, element of the changing American religious landscape.

Jean-Marc Fournier’s service is a reminder of the role many play. Often it is quiet and behind-the-scenes.