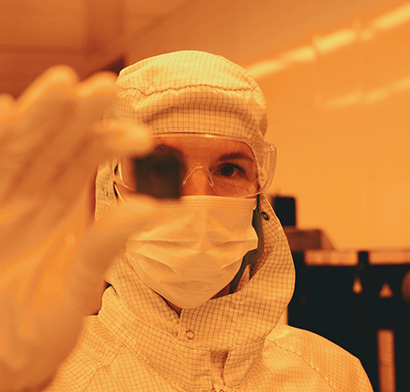 Sara Abrahamsson at the nanofabrication facility where her team makes their custom-designed optics components. (Photo by Gustav Pettersson)

The M25 multi-focus microscope uses separate cameras to capture images from 25 focal planes at different depths in a sample. (Photo by Eduardo Hirata)

For biologists, the golden age of microscopy is now. Powerful techniques developed in recent decades enable scientists to study living cells in unprecedented detail, and new techniques continue to push the limits of light microscopes.

Sara Abrahamsson, an assistant professor of electrical and computer engineering at UC Santa Cruz, is at the forefront of innovations in optical microscopy. She invented a technique called aberration-corrected multi-focus microscopy (MFM), which enables 3-dimensional imaging of living cells. More recently (in 2017), she showed that MFM can be combined with another technique, called structured illumination microscopy (SIM), that provides “super-resolution” beyond the classical limits of light microscopes.

“The 2017 paper was a proof-of-concept study. Now we want to build the microscope and show that it works for 3-D imaging of living cells with super-resolution,” said Abrahamsson, who won a $700,000 major research instrumentation grant from the National Science Foundation to fund the project.

Her collaborators in the Department of Molecular, Cell, and Developmental (MCD) Biology are thrilled to be working with Abrahamsson. “Sara is a uniquely talented inventor of microscopes,” said Grant Hartzog, professor of MCD biology.

Hartzog is one of several UCSC biologists who will be using Abrahamsson’s optical technology to study chromatin (the complex of DNA, RNA, and proteins that forms chromosomes) in the cells of various organisms. He explained that Abrahamsson’s MFM technique improves on the widely used technology of confocal microscopy. A confocal microscope blocks out-of-focus light to obtain sharp images of thin sections at different depths in a sample.

“You can take multiple slices and build up a 3-D image. The problem is the time that elapses between each image when you’re taking multiple slices of a living cell. Because the components of the cell are in constant motion, the resulting image is blurry,” Hartzog said. “Sara figured out how to focus the light so you can collect all the slices in one shot for an instant 3-D image. That’s really important for imaging living cells.”

Abrahamsson’s lab has already built one multi-focus microscope and installed it in the UCSC Life Sciences Microscopy Center, where Hartzog and others have started using it and optimizing their techniques. A SIM system currently under construction will add super-resolution capabilities to the multi-focus microscope.

Super-resolution is important because the dimensions of the structures of interest to the biologists are so small. The resolution of a light microscope is limited by the wavelengths of visible light to about 200 nanometers. Chromatin structures are much smaller than that, on the order of 10 to 30 nanometers in diameter.

But scientists have developed ways to get past the classical limits of optical microscopy. Structured illumination microscopy is one of several super-resolution techniques that have been developed, with the first practical implementations appearing in the 1990s. By combining multi-focus and structured illumination microscopy, Abrahamsson’s lab is pushing the technology to the limit in terms of both speed and spatial resolution.

Meanwhile, Abrahamsson’s graduate student Eduardo Hirata-Miyasaki has developed an extended version of MFM, called the M25, which increases the number of focal planes (or “slices”) from nine to 25 and uses separate cameras to capture the images from each focal plane. This instrument does not have super-resolution capability, but is super-fast. It can record live 3-D volumes at more than 100 frames per second and is designed for functional imaging of living neural circuits of the brain and spinal cord.

“Thanks to the advances in CMOS sensor technology, we can improve the optical design of the MFM system to create a fast and sensitive method for live 3-D imaging,” said Hirata, who presented the new system at a recent Focus on Microscopy conference in London.

Hirata explained that the diffractive gratings can be easily customized depending on the region of interest and the target depth of the sample. “The M25 images simultaneously at 25 different depths, and we can vary the separation between those focal planes. Having more focal planes allows us to image greater volumes with higher resolutions,” he said.

The biologists working with Abrahamsson’s lab are using a range of different organisms in their research. Hartzog and Hinrich Boeger study the effects of chromatin packaging on RNA transcription in yeast cells; Needhi Bhalla studies chromosome dynamics during cell division in C. elegans worms; and William Sullivan studies what happens to damaged chromosomes in fruit flies.

Abrahamsson did some of her early work at the Advanced Imaging Center at HHMI’s Janelia Research Campus in Ashburn, Virginia, and one of Sullivan’s students went there last year to use their specialized systems. The results only reinforced the need for Abrahamsson’s MF-SIM technology.

“We’re looking at what happens when a chromosome is broken, which can lead to cancerous cells,” said Sullivan, a professor of MCD biology. “We want to follow this in real time in three dimensions, but we haven’t been able to do that. What Sara’s doing is really pretty ground-breaking.”

Having the microscopy experts here on campus makes a big difference, he added.

“There’s always a lot of back and forth, the biologists talking to the engineers to figure out how to get the end result we want,” Sullivan said. “Being able to just take our samples downstairs, instead of traveling to Janelia with live flies, we can make much faster progress.”

Abrahamsson’s expertise in optics is in high demand, and she is developing and teaching new courses in optics and microscopy for students at UC Santa Cruz. She is also starting a project with researchers at NASA’s Jet Propulsion Laboratory working on a planned space probe. In all these projects, Abrahamsson is excited not only about the new technology, but also about what scientists will be able to learn with it.

“I can’t wait to see my collaborators take the first data set of living cells on the MF-SIM that we are building. Who knows what they are going to be able to discover with it?” she said.