The U.S. economy is enjoying nearly a decade of expansion since the Great Recession. Yet food insecurity — a lack of money or resources to secure enough to eat — still grips almost one in eight Americans. That’s roughly 40 million people. While slowly improving, that figure remains stubbornly higher than before the recession, when more than one in 10 U.S. residents had difficulty knowing when and how they might eat next, according to data from the U.S. Department of Agriculture.

Hungry people live in every county in America, according to the latest annual research from nonprofit relief organization Feeding America. It compiled federal and other data for 2017, its ninth year examining the issue, for a report called Map the Meal Gap. Feeding America serves 4 billion meals each year for one in eight Americans through 200 food banks and 60,000 meal programs and pantries.

“We haven’t even returned to the baseline before the Great Recession, and that’s of great concern,” Craig Gundersen, a professor at the department of agricultural and consumer economics at the University of Illinois and lead researcher for the study, told CBS MoneyWatch. “There’s something going wrong in our country that we really have to start addressing. Why hasn’t this fallen more? I think the food insecurity rate is one of the best barometers we have of well-being in our country.”

Rural counties account for about 78 percent of the highest food insecurity rates in 2017, just one percentage point lower than in 2016. At just 63 percent of all U.S. counties, rural areas are home to a disproportionate share of hungry people compared to urban areas, even though more sheer numbers of people are living with food insecurity in cities, the researchers wrote.

Most likely to go hungry

Children remain the most vulnerable, and they’re more likely than adults to go hungry in every state. The percentages of kids without secure access to food are wide, depending on the county, according to the study. The figures range from 10 percent in North Dakota to 24 percent in New Mexico, Feeding America found.

Differences in food insecurity are regional, too: A whopping 87 percent of counties in the top 10 percent of food-insecure residents live in South, the researchers found. 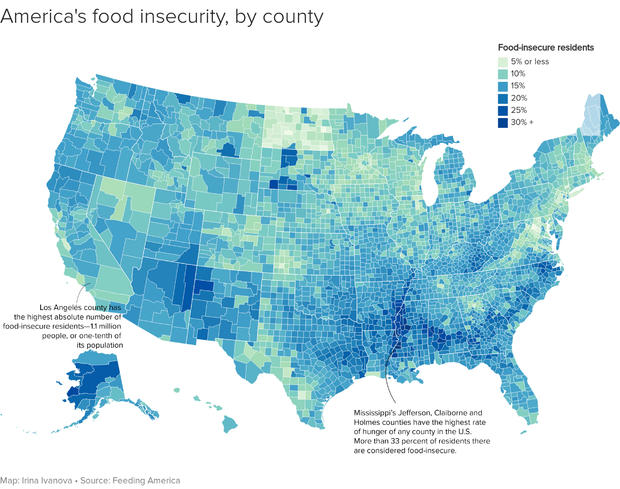 The Feeding America study comes as the Trump administration is trying to tighten work requirements for the Supplemental Nutrition Assistance Program (SNAP), commonly known as food stamps, after similar measures were removed from the Farm Bill that passed last year. If implemented, the changes may lead to a reported 750,000 people losing their SNAP benefits. A public comment period for the changes, now under review, ended in April. A decision will be made in the coming months.

With unemployment so low and the economy still growing, why are so many Americans going hungry? One culprit might be rising costs for food, shelter and health care.

A survey last year from the Food Research & Action Center, a nonprofit group that works to eliminate hunger, found nearly 16 percent of families lacked the funds to buy food at least once in 2017, up slightly from the previous year. The risk of hunger was 1.3 times higher in homes with kids, according to that survey, based on a Gallup poll of more than 330,000 people.

Feeding America found the average per-meal cost rose 2 cents to $3.02 across all counties. But the cost per meal spans a wide range: from $2.07 in Willacy County, Texas, to $5.85 in New York County (Manhattan).

However, the average SNAP benefit per person is about $126 per month, which works out to roughly $1.40 per person per meal. A study last year from the Urban Institute pointed out that SNAP benefits aren’t enough to cover the cost of a meal in most places in the U.S.

Clearly, people who count on government assistance aren’t the only ones going hungry. Millions who make too much to qualify for SNAP are also struggling where food prices are high. All but 3 percent of counties in the U.S. are home to people unlikely to qualify for most federal programs but still have a hard time getting food on the table, according to the research.

Said Gundersen: “So I think that any and all efforts we can make to reduce food prices the U.S. can have a profound impact at lowering food insecurity in our country.”