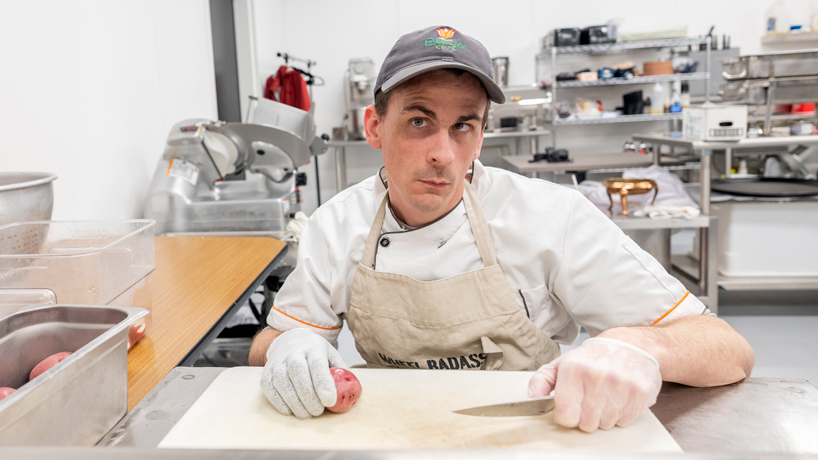 Kevin Geekie works as a prep cook at Paraquad’s Bloom Cafe. The UMSL social work student was in his last semester of culinary school in 2006 when an infection following a surgical procedure on his cerebellum drove him into a coma and left him with ataxia – a nervous system condition that resulted in severe motor and speech impairments. Geekie hopes to use his UMSL degree to make a difference for others in a similar situation.

It was supposed to be a simple procedure.

Back in 2006, when Kevin Geekie was 26 years old, he went into the hospital to get a benign tumor removed from his cerebellum, at the back of his brain. Expected recovery time: two weeks.

“I was in there for six months,” Geekie says. “I started taking a nosedive. I was doing fine. Then, all of a sudden, I did really bad.”

Geekie developed an infection that drove him into a coma. Through the ordeal, he developed ataxia, a nervous system condition that resulted in severe motor and speech impairments and left him using a wheelchair.

It took Geekie some time to get used to his new life. Once he did, though, he knew he wanted to make a difference for others in a similar situation.

“I’ve been through it. I live with brain injury,” Geekie says. “Now I’m talking to you: not sleeping in bed, being depressed. Just get out and do it. You’ve got to do it.”

Geekie is pursuing his bachelor’s degree in social work at the University of Missouri–St. Louis and expects to graduate in May 2020. He started taking one class at a time in 2013 but became motivated to do more around the time his mother passed away two years later.

“It’s been challenging, slow,” Geekie says. “Because of my disability, I can only take two or three classes at a time, so what takes people two years takes me four or five, maybe. It’s really good to be near graduation. It’s like seeing the light at the end of the tunnel.”

For a project in his Human Service Organizations class last fall, Geekie and his group developed a $10,000 grant proposal to Ameren Missouri to fund a counseling program for people with brain injuries. The course instructor, Associate Professor of Social Work Baorong Guo, says the project is no mere exercise. She expects students to do the research, collect the paperwork, make contacts and submit an actual proposal for consideration.

“He’s a very devoted student, very dedicated to his learning,” Guo says. “He has benefited from the services provided by social service organizations and, in the future, he really wants to give back to the community using his skills and expertise.”

After earning his degree, Geekie hopes to work with the Brain Injury Foundation of St. Louis, helping people with brain injuries find employment.

Outside of school, Geekie keeps himself busy by playing wheelchair rugby and working as a prep cook at Paraquad’s Bloom Café, a breakfast and lunch restaurant that employs people with disabilities. He was in his final semester of culinary school before his fateful hospital stay.

“I tell Paraquad every day that I’m really grateful for this job,” Geekie says. “Chopping onions and making sandwiches, I can do much more than that, but it does matter. I’m preparing food and helping people.”

This story was originally published in the spring 2019 issue of UMSL Magazine. If you have a story idea for UMSL Magazine, email magazine@umsl.edu.