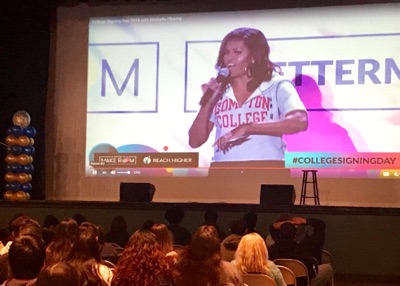 More than 200 students from regional high schools attended a first-ever UC-sponsored celebration for college-bound students at the Santa Cruz Civic Auditorium on Wednesday (May 1, 2019).

The event was part of College Signing Day, a national celebration spearheaded by former First Lady Michelle Obama, whose address from UCLA was live-streamed to more than 3,000 venues across the country.

“Like me, you were told you weren’t college material,” Obama told an energized crowd in Pauley Pavilion at UCLA. “You were setting your sights too high. They told me I wanted too much—I should dream a little smaller.”

A Princeton graduate, Obama encouraged her national audience of 600,000 students to brace for more negativity, but to never let the “haters” get the best of them.

Obama’s remarks were met with enthusiasm in Santa Cruz. Students from 16 regional high schools were invited to attend the event, which was a collaborative effort put on by UCSC’s Educational Partnership Center (EPC), Office of Admissions, and Division of University Relations. Students accepted to UCSC from 13 regional community colleges were also invited, said EPC Executive Director Maria Rocha-Ruiz.

Keynote speaker Alegra Eroy-Reveles, an assistant teaching professor of chemistry and biochemistry, described her own path from Watsonville High School to UC Santa Cruz and a doctorate in chemistry. She offered tips for success, including “ask for what you need,” “do what you love,” and “always do your best.”

“There are people on campus who want to help you,” she said. “They want you to be successful.”

As part of the program, students were invited to introduce themselves, declare where they will enroll in the fall, and mention their career goal. Dozens of students joyfully proclaimed their intention to enroll at schools from Cabrillo College to Cornell University, and their pursuit of careers in science, law, education, social work, medicine, technology, and business.

Nelson Ramirez plans to study computer science and gaming at UC Santa Cruz, but the Harbor High School senior said he’s leaving open his options to add psychology, writing, and journalism. Fellow Harbor High student Cristina Vargas plans to major in biology at UCSC, aiming toward a career in veterinary medicine. “I’ll be living at home, so I’m going to join the cheer team and Latinx organizations to make friends,” she said. “My family is here, and I enjoy this area. And I like my financial aid package.”

Megan Harp, who plans to major in film and digital media at UCSC, will enroll as a junior transfer after completing two years at Gavilan College in Gilroy. She attended the event with her mother—and was happy to win a microwave oven during the raffle. Reach Higher, Obama’s organization, provided mini grants that funded raffle prizes, including six laptop computers, a microwave oven, bedsheets, and two autographed copies of Obama’s bestselling memoir, Becoming.

Obama wore a cropped Compton College t-shirt, black jeans, and sneakers at the UCLA event, saying, “I wanted to give our community colleges a little extra love. We are fortunate in this country to have an amazing community college system.”

Obama’s inclusive message honored the choices made by those choosing trade school, the military, community college, or a four-year university. “It’s the best investment you can possibly make, she said.

She admonished the crowd to ask for help–for tutors and counselors–and “make those professors teach you!” “You have to build a community for yourself,” she said. “You guys have to have a posse of support.”

“If you stumble… I want you to get back up,” said Obama. “It’s not the failure, it’s the ability to bounce back from the failure. That’s what makes you a true champion.”