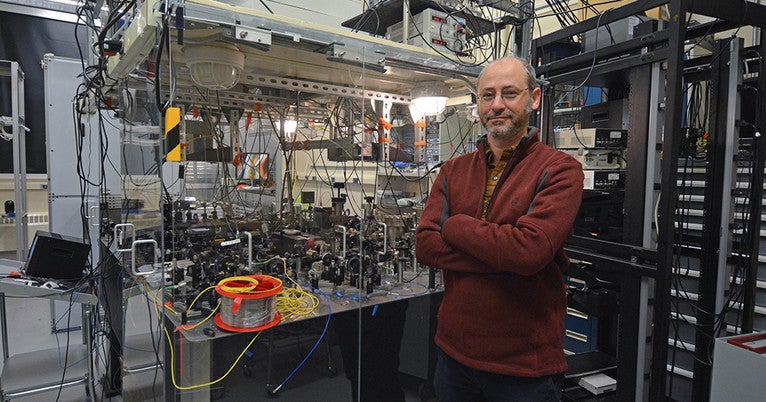 The fellowship is the U.S. Department of Defense’s (DoD) most prestigious single-investigator award and supports basic research with the potential for transformative impact. The DoD announced the 2019 class of 10 Vannevar Bush Faculty Fellows on May 1.

The five-year fellowship provides up to $3 million in funding. It is administered by the Office of Naval Research and is named for Vannevar Bush, who was the director of the Office of Scientific Research and Development during World War II.

Harris, who joined the Yale faculty in 2004, studies the interplay between the radiation pressure of light and the mechanical motion of objects. His novel ideas and findings are now in use in a number of physics laboratories around the world. Harris’ current work looks at advancing our knowledge of quantum sensing technologies and new techniques for supercooling fluids.

“This is an incredibly exciting opportunity,” Harris said. “For several years we have been developing the idea that magnetically levitated drops of superfluid helium can be used to address fundamental questions regarding macroscopic quantum effects, particle physics, and fluid mechanics. The Vannevar Bush Faculty Fellowship will allow us to realize these ideas as actual experiments, supporting the training of several graduate students and postdoctoral researchers in blue-sky scientific research, and will hopefully lead to unexpected discoveries.”

“Some people are famous for proposing and attempting bold experiments that are essentially impossible. Jack has bold and original ideas, but he thinks extremely carefully in advance about all the potential pitfalls and finds clever and often relatively simple schemes to achieve his goals,” said Yale physics colleague Steve Girvin. “He has a strong ability to distinguish between the impossible and the merely difficult.”