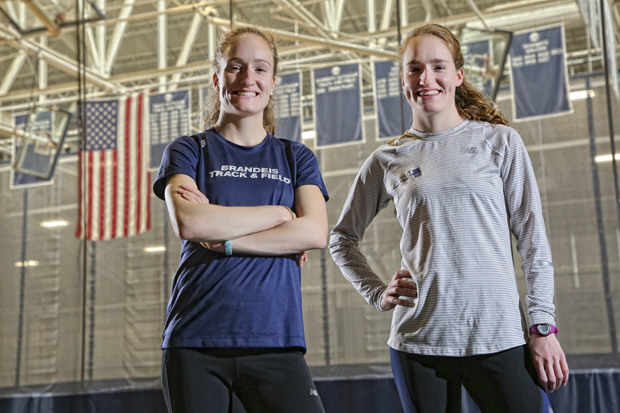 Twin sisters Julia and Emily Bryson ’19 had the second weekend in March circled on their calendar for the better part of a year.

Not wanting to jinx themselves or their Brandeis track and field teammates ahead of the Division III national championships that weekend, they instead stuck to their training, ran one race at a time, and avoided thinking about results.

Their disciplined approach paid off.

On the Friday of what the Bryson twins now call a “perfect and surreal weekend,” they and teammates Devin Hiltunen ’22 and Doyin Ogundiran ’19 won the national title in the distance medley relay at the Reggie Lewis Center in Boston. It’s the second national championship won in a team event by the Brandeis track and field and cross country program and the university’s 27th all-time national title, including both team and individual events.

“We thought about that weekend for a long time,” Emily Bryson said. “All season we prepped for that moment, so when we finally won it really was surreal. Exciting definitely — but surreal.”

By winning the race, the Judges DMR team proved what they had believed all season: That if every runner executed to the best of her ability and remained composed, all four would be standing on the first place podium by the end of the day.

“I tried not to talk about it too much,” Julia said. “I knew it was there and that we could do it and no one ever spoke about how this was our only chance, or something along those lines. It was Devin’s first nationals but Doyin knew we were capable of winning too. I guess it was just an unspoken thing. No one wanted to talk too much about it for fear of spoiling it.” 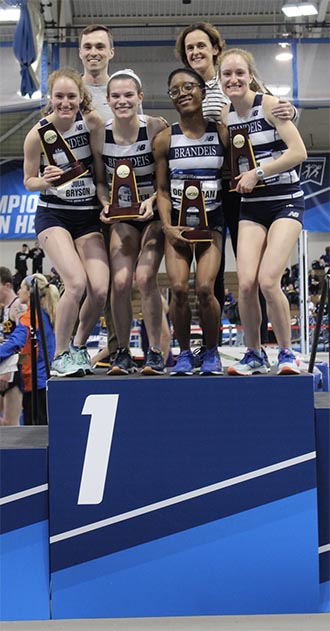 ‘We just kept getting faster and faster’

Both Bryson sisters were destined for competitive running well before they bookended a winning performance at national championships this spring.

The Brysons were both 5 when they started running. They joined the Quincy Youth Track Club in their hometown and ran straight through high school.

One of the sisters’ favorite past-times is also running with their father, Jim.

“We grew up running with our dad,” Emily said. “Slowly we got faster than him. He’d send us to landmarks on our routes — like he’d say ‘run to the flagpole and come back to me.’ We just kept getting faster and faster.”

When the Judges won the DMR national title on March 8, both Jim and their mom, Grace, were at the finish line, which has been the norm since the Bryson sisters first started racing.

“Our parents are very supportive,” Julia said. “My dad always tells us before every race to just have fun. He tells us how important it is to take it all in and enjoy the journey.”

Has the journey included any sibling rivalry?

“It’s honestly more of a collaborative relationship, so winning a national championship in a relay, which is a team event, with Emily made it special,” Julia said. “In all honesty, Emily is so far ahead that it’s never been too competitive — maybe when we were younger but that changed.”

“Both our skill sets are definitely in mid-distance running,” Julia added. “And Emily has a great kick. She has the most feared kick in D3.”

A “kick” is runner-speak for the ability to sprint on a dime at the end of an endurance race.

At national championships, Emily’s kick led to her running the 200-meter final lap in just 31 seconds.

“My teammates set me up so well going into the final leg,” Emily said. “In the last lap, I knew I had it. I was confident in my kick and in the last 50 meters I was literally crying to the finish. It was just so much emotional release.”

Julia, Emily, Hiltunen and Ogundiran set each other up for success and showed why they were worthy of entering the race as the number one seed. Julia and Hiltunen’s start helped set the pace for the quartet to earn the banner result.

“I felt great energy from my team and I knew my leg would go fast,” Julia said. “I remember being in fifth but staying right with leaders. Once I passed the baton to Devin I knew I had run the leg of my life and that I had just set us up. Then Devin and Doyin ran incredible legs.”

Brandeis was in fifth by the time Ogundiran, the third runner, took the baton. She proceeded to run the 800-meter in 2.13.75 — the second-fastest 800-meter in the race — which pushed the team into second place.

“We were pretty certain that if we executed our miles like we did all season, we could do it,”

Emily said. “I didn’t anticipate getting the baton from Doyin with the leaders. The strategy for us was to stay behind the leaders through seven laps and then kick home. That’s what happened.” 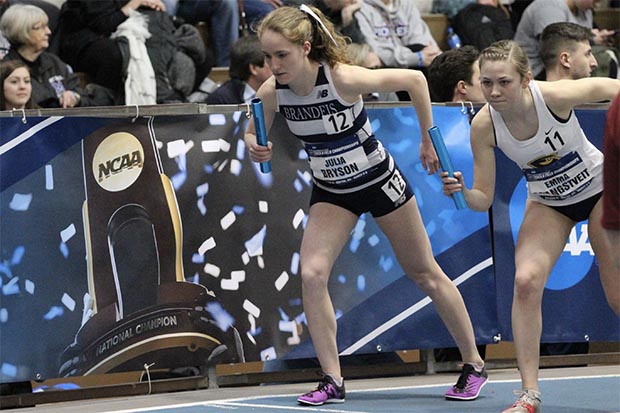 Julia Bryson leads off the Judges in the distance medley relay

Judges head coach Sinead Delahunty Evans and assistant coach Steve Flanagan were on the sidelines offering words of encouragement to the DMR quartet as the rest of their teammates cheered on the sidelines.

Looking back, Julia and Emily are particularly thankful for Evans, a veteran of running who is in her fifth year at the helm and also represented Ireland at two Olympic Games.

Evans, they say, has been a mentor since their first year on campus.

“Like our parents, Sinead and the coaching staff have been very supportive,” Julia said. “I think Sinead has been my biggest mentor. She’s so knowledgeable and caring about her athletes, always thinking of new training ideas and tweaking them to improve our training.”

“Sinead has given us every opportunity to succeed,” Emily added. “Her investment in me as an athlete gives me a lot of faith and confidence in myself.”

Evans was all in on the DMR quartet’s performance-first, results-later mentality.

“Everyone ran beautifully,” Evans said after the race. “They executed the plan perfectly. Julia put us in a great position to start the race. Devin’s 400 was terrific — for a first-year runner to stay competitive the way she did was awesome — Doyin…stayed really patient and paced herself, pushing when she needed to…and then Emily ran the way she has all season long, running comfortably until it was time to close it out.”

The Brysons have been so focused on process over results that they say winning this national championship hasn’t fully sunken in.

While they celebrated the win with their parents, coaches, teammates and classmates in the immediate aftermath of the relay, it’s possible having won a national title won’t feel real until the track and field banner hanging inside the Gosman Sports and Convocation Center field house gets updated.

“It has definitely not sunken in yet,” Emily said. “Four people walked away national champions. But to be honest, I’m not sure when we’ll truly realize what we did.”