The distinguished scientists were given one of the university’s highest honors for making major contributions to their fields. 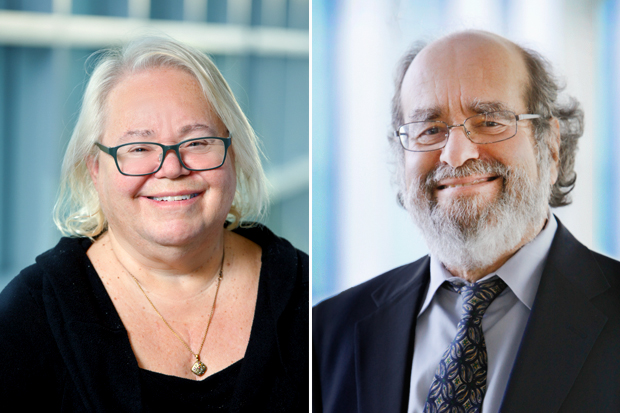 At its May 2 meeting, the Board of Trustees named Eve Marder ’69, the Victor and Gwendolyn Beinfield Professor of Neuroscience, and Irv Epstein, the Henry F. Fischbach Professor of Chemistry, as University Professors, one of Brandeis’ most prestigious academic honors.

The title of University Professor is conferred on faculty members whose renown crosses disciplinary boundaries; who have achieved exceptional scholarly or professional distinction within the academic community; and whose appointment will enhance the university’s reputation.

Provost and executive vice president of academic affairs Lisa M. Lynch said, “Both Professor Epstein and Professor Marder are exceptional not only for being such intellectually influential scientists on the national and international stage, but also for their deep and abiding commitment to their students’ academic and personal development.”

Marder’s research on small neural circuits found in lobsters and crabs has revolutionized our understanding of the fundamental nature of neuronal circuit operation, including how neuromodulators control behavioral outputs and how the stability of circuits is maintained over time. Her laboratory now uses experimental and computational tools to study animal-to-animal differences in resilience to environmental perturbations.

Marder received the 2016 Kavli Prize in Neuroscience and the 2013 Gruber Foundation Neuroscience Prize. Earlier this year, she received the prestigious National Academy of Sciences Award in the Neurosciences. The NAS described her as “one of the most influential neuroscientists of her generation.”

“I am deeply honored to be named a University Professor and hope to continue working with my colleagues and our students for years to come,” Marder said.

Epstein is a founder of the field of nonlinear chemical dynamics, which studies reactions in which concentrations of chemicals increase and decrease over time or form patterns in space. Such reactions are relatively rare but are the basis for the changes in levels of chemicals in our bodies that occur over a 24-hour cycle. They are also implicated in cellular transformations that take place during the early stages of embryonic development.

Three years ago, he was selected as a Fellow of the American Association for the Advancement of Science.

“I am delighted by this wonderful recognition of my contributions to Brandeis’ outstanding community of scholars, students, staff and administrators and to the scientific community,” said Epstein, who began his career at Brandeis 48 years ago. “I am especially honored to join the distinguished company of my colleagues, friends and now fellow university professors, Anita Hill, Eve Marder and Jonathan Sarna.”

Sarna ’75, MA’75, the Joseph H. and Belle R. Braun Professor of American Jewish History was named in 2016; and Hill, professor of social policy, law, and women’s, gender and sexuality studies, in 2015. David Hackett Fischer, the Earl Warren Professor of History, Emeritus, has also received the honor.

Both Marder and Epstein have demonstrated an extraordinary commitment to mentorship.

In honoring Marder earlier this year, the NAS said her “impact on the people in her field is as important as her research. Throughout her career she has served as a mentor to generations of neuroscientists and served the community on numerous other professional levels.”

In 2006, Epstein was named a Howard Hughes Medical Institute professor and used a large portion of the $1 million grant he received to found the Science Posse program, which aims to attract and retain talented, underrepresented students in college-level science. The Posse STEM Program, as it’s now called, has been adopted by 10 other universities and colleges.

“It is not an exaggeration to say that the underrepresentation of African Americans, Hispanics, and Native Americans in the scientific workforce is becoming a national crisis,” Epstein wrote in an article in 2007. “Concerns for economic survival, social justice and scientific excellence all argue that we cannot afford to have a substantial segment of our population excluded from the scientific endeavor.”