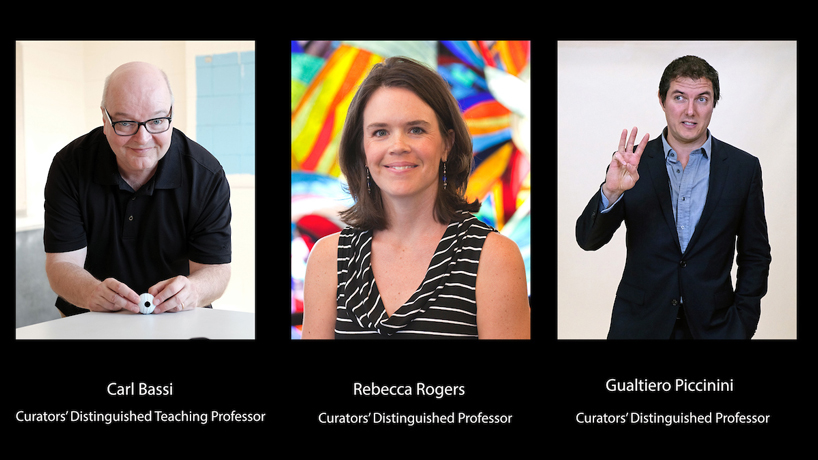 University of Missouri–St. Louis Professor Rebecca Rogers is among the world’s most influential and innovative scholars in the area of literacy and critical discourse.

Gualtiero Piccinini recently received recognition from the country’s leading professional organization of philosophers for his sustained contributions to thinking on computation.

Carl Bassi has established himself as a gifted teacher while directing research efforts in the College of Optometry and recently helped develop a putting system being marketed on Callaway golf balls.

The Board of Curators of the University of Missouri saw fit to further recognize the three standout faculty members by elevating them to the most prestigious ranks in the UM System. At its most recent meeting, the board voted to appoint Rogers and Piccinini to serve as Curators’ Distinguished Professors and Bassi as a Curators’ Distinguished Teaching Professor.

“Curators’ Distinguished Professors represent the highest honor bestowed on faculty, and Rebecca, Gualtiero and Carl are definitely most deserving,” UMSL Provost and Executive Vice Chancellor for Academic Affairs Kristin Sobolik said. “They are fantastic representatives of UMSL, our faculty and our community, and we are pleased to celebrate with them at this great achievement.”

Each appointment covers a period of five years but can be extended at the discretion of the chancellor.

Rogers, a member of the Department of Educator Preparation and Leadership in the College of Education, has published seven books and more than 75 articles and chapters in national and international journals, with some of her research even translated and published in Spanish.

Letters from 14 scholars from universities spread across the United States and around the globe, including as far away as South Africa and Australia, supported Rogers’ nomination for appointment to Curators’ Distinguished Professor.

“I know of few scholars who have had as many ‘must read’ books and articles on the field of literacy education in the past 18 years,” The Ohio State University EHE Distinguished Professor David Bloome wrote in one of them.

Piccinini is similarly well regarded in his field of philosophy. His research centers on the intersection of philosophy and cognitive science, and he has published papers on the philosophy of mind, neuroscience and computational psychology.

The American Philosophical Association named him the 2018 recipient of the K. Jon Barwise Prize, an award that recognizes significant and sustained contributions to areas relevant to philosophy and computing. They include the oft-cited book “Physical Computation: A Mechanistic Account.”

In his letter of support for Piccinini’s nomination for the Curators’ Distinguished Professorship, Washington University in St. Louis Professor Carl Craver described him as “among the most objectively accomplished philosophers of his generation.”

While Bassi has been featured lately in multiple news reports for his work developing the Triple Track putting technology now being using by Callaway, he built his reputation around UMSL first and foremost in the classroom.

His new rank as Curators’ Distinguished Teaching Professor is only the latest evidence. Previously, students in the College of Optometry selected him for the Outstanding Optometric Educator Award in 1998 and again in 2008.

“Whether mentoring a small group of undergraduate, graduate or professional students or in an auditorium before 100 professionals seeking continuing education, Carl generates enthusiasm and passion for those in attendance,” Dean Larry Davis wrote in a letter recommending Bassi’s appointment. “His skill in doing so is particularly noteworthy because the topics he tackles are often characterized by a high degree of difficulty. Good instructors help students learn the essentials. Outstanding instructors provide for deep learning of difficult topics for not only the brightest among us but also for those who require extra commitment from the instructor. Carl definitely demonstrates the latter while consistently earning respect and gratitude of his students.”

Both Mushaben and Rosenfeld long ago earned the title of Curators’ Distinguished Professor, and both are holding the honored rank in their retirement.

Mushaben, a Curators’ Distinguished Professor Emerita, is well regarded for a career’s worth of work in comparative politics and gender policy. She has authored or co-edited five books, including “Becoming Madam Chancellor: Angela Merkel and the Berlin Republic,” published in 2017. She was named UMSL’s first College Professor of Global Studies in the College of Arts and Sciences.

Rosenfeld, a Curators’ Distinguished Professor Emeritus, is one of the nation’s leading experts on sources of violent crime and crime trends. In 2017, the American Society of Criminology honored him with the Edwin H. Sutherland Award for his accumulated contributions to research in criminology.