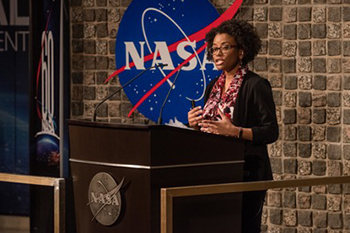 Perhaps it was the silent ‘p’ of psychology that made it seem like a magical area of study and first sparked the educational interest of a young Shanique Brown, jokes the now accomplished industrial/organizational (I/O) psychologist and academic.

Brown, a Southern Illinois University Edwardsville alumna of the I/O psychology master’s program, turned that magical inspiration into a successful career after her passion for the discipline’s tremendous impact was solidified more than a decade later.

“I ‘accidentally’ discovered I/O psychology while volunteering with the human resource department of the company I was working at,” Brown recalled. “I had made the decision, after my undergraduate studies, to take some time to find my passion within the broad field of psychology, and that passion found me.”

Brown, of Jamaica, began researching top-rated I/O psychology master’s programs, and soon discovered SIUE. SIUE’s I/O master’s program was highly-regarded at that point and has continued to excel. In a 2018 Society for Industrial and Organizational Psychology report, it was tabbed fourth nationally for overall program quality.

“I realized that SIUE had a top-rated I/O psychology program that offered the opportunity for research experience working with faculty mentors and through the completion of an empirical thesis,” Brown said. “I was also fortunate to have a friend living in Edwardsville who was able to connect me with a current student in the I/O program at the time. She spoke highly of the faculty and supportive climate in the program. This made my decision to apply, and eventually accept the offer of admission, very easy.”

Since achieving her master’s from SIUE in 2011, she has completed a doctorate in I/O psychology from DePaul University. She is now an assistant professor of psychology at Wayne State University in Detroit. Her research focuses on exploring the cognitive processes and states of individuals and teams. Several of her current projects examine knowledge integration within cross-disciplinary teams.

“I/O psychology is a discipline that has and will continue to make tremendous impact, as it is the science of work, and many of us spend the majority of our waking hours working,” Brown explained. “I/O psychologists are working to make our work lives better.”

In February, Brown was invited by the Office of Diversity and Equal Opportunity at the NASA/Marshall Space Flight Center to present as part of their 2019 Black History Month program. She spoke on the topic of diversity and inclusion in preparation for migration to the Moon and Mars.

“The experience was impactful both personally and professionally,” she noted. “I have friends who jokingly call me a ‘lunatic’ due to my obsession with the Moon. So, being even distally included in conversations about going to the Moon or Mars invigorates me. Further, as an immigrant woman of color, the acknowledgement of the value of being diverse, inclusive, and equitable while planning for these future missions to the Moon and Mars resonates with me.”

According to Brown, being inclusive of the thoughts and ideas of a diverse pool of experts, with various life experiences, demographic characteristics, or deeper level differences, such as values can help make exploration efforts more successful.

“Professionally, the experience provided more evidence of the value of I/O psychology,” she added. “In my talk at the NASA/Marshall Space Flight Center, I spoke about ideas for recruitment and selection to promote diversity and inclusion. I also spoke about training to promote both social and knowledge integration, when diversity is present.”

It is clear Brown’s passion for I/O psychology has only deepened, as she underscores the incredible value of the discipline and its role in making the workplace more conducive to the welfare and productivity of employees.

“Historically, the workplace has been viewed as a space with employees working on assembly lines, and later collocated at desks or cubicles,” Brown said. “However, the nature of work has changed tremendously in recent decades, and I/O psychology can be applied to all the variants of work as we navigate these changes.”

Brown notes that in 2019, AARP ranked industrial/organizational psychology as the best career worth going back to school for.