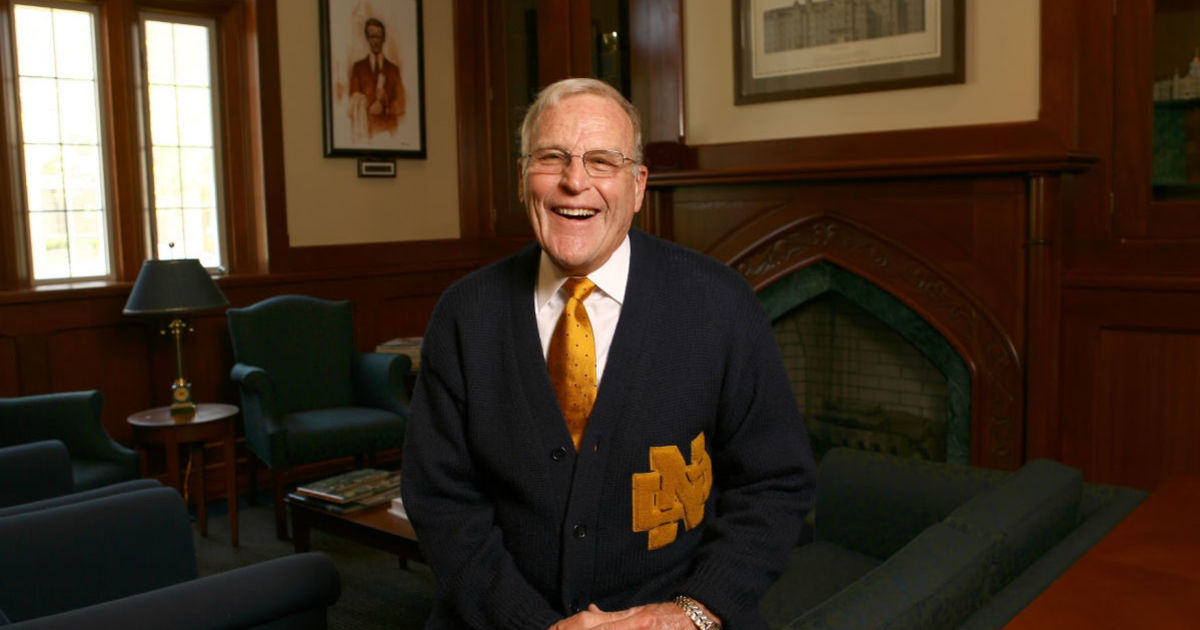 Charles F. “Chuck” Lennon Jr., associate vice president and executive director of the University of Notre Dame Alumni Association for 30 years, died Saturday, May 4. He was 80.

“Few people have so enthusiastically stood for and represented Notre Dame like Chuck,” said Rev. John I. Jenkins, C.S.C., the University’s president. “He was a fount of optimism, knowledge and love for his alma mater who will be dearly missed. Our prayers are with Joan and his family.”

Under Lennon’s leadership, the Notre Dame Alumni Association earned a national reputation for innovation in programming. It was among the first to offer continuing education programming – including the Hesburgh Lecture Series and Excellence in Teaching program – and to initiate community service programs that have been emulated throughout American higher education.

Lennon also led in the creation of the Black, Hispanic, Asian Pacific and Native American alumni groups and expanded the roles for women, senior, young and international alumni within the association.

The vast network of Notre Dame Clubs in cities and towns across the country and around the world is arguably the most extensive in higher education and plays a central role in maintaining the strong bond between Notre Dame and its alumni. Under Lennon’s direction, the number of clubs grew from 151 to 276, including more than 60 internationally, upon his retirement in 2011.

“Chuck Lennon’s impact on the Notre Dame family cannot be overstated,” said Dolly Duffy, who succeeded Lennon as executive director of the association. “He was a passionate, innovative leader who built an organization that set the standard for alumni associations in higher education. More importantly, Chuck’s kindness, generosity and warmth made him a dear friend and mentor to countless alumni and friends across the country and around the globe.”

A native of Joliet, Illinois, Lennon earned his bachelor’s degree from Notre Dame in 1961 and played for three seasons and received a monogram in baseball. He earned a master’s degree in guidance and counseling from the University in 1962 and served in the Notre Dame athletics department from 1961 to 1966 as an assistant basketball and baseball coach and an assistant ticket manager. He also served for two years as the University’s coordinator of research and sponsored programs.

After leaving the University, Lennon held executive directorships with the Mental Health Association of St. Joseph County, the South Bend Model Cities Program, the Community Development Agency, the Department of Redevelopment and the Housing Allowance Office. He was president of the St. Joseph Insurance Agency from 1978 to 1981 and served for 13 years as a member of the South Bend Community School Corporation Board of Trustees.

Lennon taught a management course at the graduate and undergraduate levels in Notre Dame’s Mendoza College of Business. He received the Alumni Association’s Armstrong Award in 1989 and the Notre Dame Presidential Award in 1993. In 1992, he was presented with the Irish Clover Award by the Notre Dame student body. He received the Professional Development Award for Mentoring Minorities in 2001 from the Council for Advancement and Support of Education.

For a feature story on his life several years ago, Lennon was asked what he would like on his tombstone.

Lennon is survived by his wife, Joan, five children, three of whom are Notre Dame graduates – Sean, Molly, Brian, Colleen and Kevin – and 16 grandchildren.