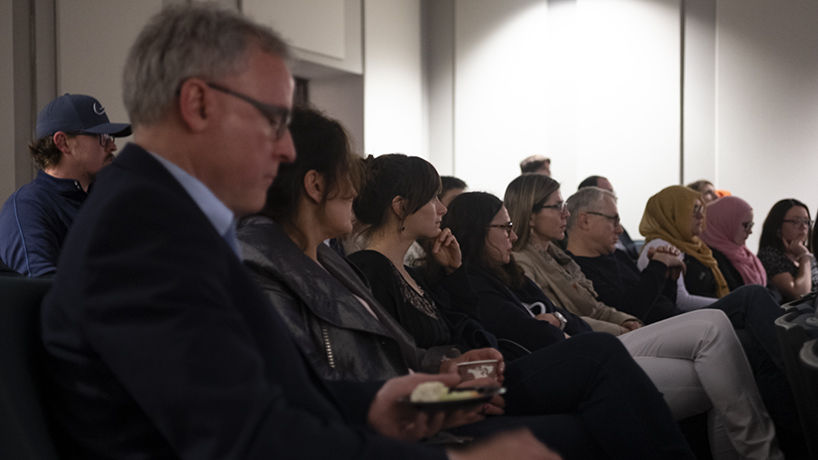 Almost every seat was filled in Gallery 210 for Friday’s finale of the inaugural Bosnian Film Series. (Photos by Jessica Rogen)

It’s dusk, and on opposite sides of a backyard picnic table sit a grown son and his father, who is having a drink.

“Are you really dead?” the father, Zaim, asks his son. “Then tell me to forget you.”

From an upstairs window, his two living children watch as Zaim, alone, lifts his glass in a toast to a delusion ­– or a ghost.

This is the opening scene of “Fuse” aka “Gori vatra,” a Bosnian film with a title that translates to “The fire is burning.” On Friday, the film played in the University of Missouri-St. Louis’ Gallery 210 as the third and final installment of the inaugural Bosnian Film Series, a collaboration between UMSL, Saint Louis University and Fontbonne University. The series evolved from the nexus of Fontbonne’s Bosnian Memory Project and UMSL’s Bosnian exchange program, which both started around 2007.

Directed by Pjer Žalica and released in 2003, “Fuse” takes place in Tešanj in the Federation of Bosnia and Herzegovina. A black comedy, the film depicts Tešanj’s post-Bosnian War tensions in advance of a visit from President Bill Clinton, who supposedly will bring prosperity along with him.

Like a much darker “Waiting for Guffman,” there’s futility, farce, tension and humor as the major and police chief attempt to squelch Tešanj’s small-time but pervasive underbelly, and as the Bosniaks within the town have to make nice with the ethnic Serbs without. In a secondary storyline, Zaim searches for his eldest son, who was lost to the war. 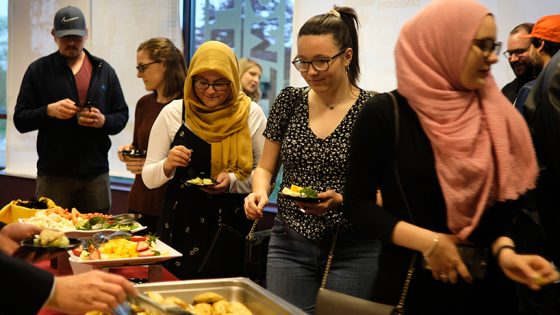 Before showing “Fuse,” organizers of the Bosnian Film Series invited in the community to break bread and get to know each other.

The series was organized in part by UMSL’s Rita Csapo-Sweet, associate professor of communication. Her goal was to showcase the culture of Bosnia to UMSL and the St. Louis community while introducing the Bosnian community to UMSL. St. Louis is home to 70,000 Bosnians, and Csapo-Sweet believes more Bosnian students at UMSL would be a “win-win” for all.

For the 50-some attendees, finding Bosnia in St. Louis was the point. They included members from the Bosnian community such as sisters Edna and Adna Ismajilefendle and their father, Admir. The three attended all three films in the series so that the sisters could experience the types of movies their father had grown up watching.

“It’s made us learn a lot,” said Adna. “We talked a lot about the history of what happened and how it relates to the Bosnian culture.”

Other Bosnian attendees, like Joann Kats, hoped to gain deeper ties to the St. Louis Bosnian community and to experience contemporary Bosnian films for the first time.

Then there were the attendees who’d experienced Bosnia and had come back for seconds. Ashley Glenn, a researcher in Bosnia, had brought along her friends Patrick Bolind, Lauren Nacke and Scott Muscler, who enjoyed becoming engaged with the St. Louis Bosnian community and seeing interesting films.

Another pair, Rachel and Ben Schulte, had gone to Bosnia with their church last April and were hooked.

“Our pastor shared his love of Bosnia,” Ben explained. “We just fell in love with Bosnia, the people, the culture and the food.”

The experience of going to Bosnia, Csapo-Sweet noted, tended to draw people in and change their lives. As a filmmaker herself, she knows the power of a movie to get people interested.  Getting the community in to watch the film – that’s just the first step.

“I want to leave you with the idea that these are really world-class films,” Csapo-Sweet said. “They’ve won awards all over the world. Basically, these are films that both the non-Bosnian audiences as well as the Bosnian audience can enjoy and really get to know a different side of Bosnian culture.”