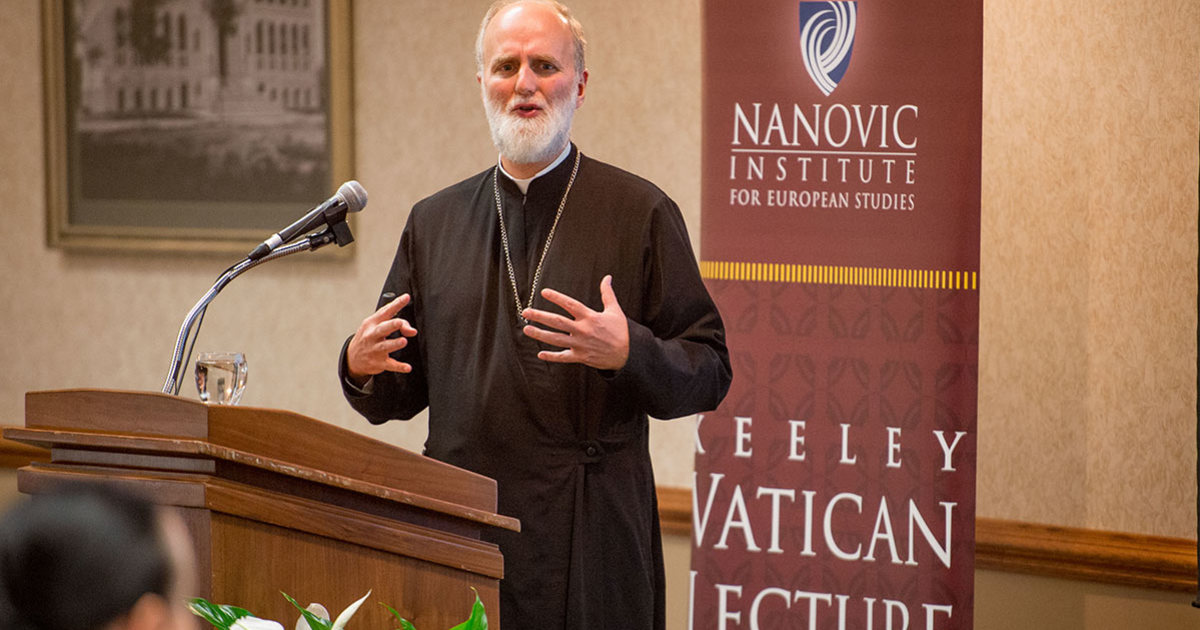 Ukrainian Archbishop Borys Gudziak, a visionary leader in the Catholic Church and higher education, will be presented with the Notre Dame Award in a ceremony June 29 in the western Ukrainian city of Lviv, University President Rev. John I. Jenkins, C.S.C., announced Monday (May 6).

“In the face of innumerable challenges, Archbishop Gudziak has made the Ukrainian Catholic University a center for cultural thought, Christian witness and the formation of a Ukrainian society based on human dignity,” Father Jenkins said. “At the same time, he has steadfastly provided dedicated pastoral guidance to members of the Ukrainian Catholic Church. It will be an honor to recognize his courageous and faithful service when we visit Ukraine in June.”

Previous recipients of the Notre Dame Award have included President and Mrs. Jimmy Carter of the United States; St. Mother Teresa of Calcutta; John Hume of Northern Ireland; Cardinal Vinko Puljić, archbishop of Sarajevo, Bosnia and Herzegovina; L’Arche community founder Jean Vanier of Trosly-Breuil, France; and most recently, the Colectivo Solecito de Veracruz, a group of Mexican mothers organized to search for their missing loved ones in the face of criminal violence and state complacency.

This is the first time the award is being conferred on someone of Ukrainian descent.

The Notre Dame Award is presented to “men and women whose life and deeds have shown exemplary dedication to the ideals for which the University stands: faith, inquiry, education, justice, public service, peace and care for the most vulnerable.”

Elevated recently by Pope Francis as metropolitan-archbishop of the Ukrainian Catholic Archeparchy of Philadelphia (the equivalent of an archdiocese), the founder of Ukrainian Catholic University (UCU) is widely admired internationally for his unwavering, courageous and humanitarian leadership of the first Catholic university established on territory of the former Soviet Union.

Founded in 2002, UCU is built on the “pillars of the martyrs and the marginalized” — the martyrs being those who suffered and died under communist repression, and the intellectually disabled who too often exist on the margins of society, both of whom Archbishop Gudziak considered essential to rebuilding trust in Ukrainian society and who were virtually invisible under Soviet rule.

The archbishop exemplified the spirit of the martyrs in 2014 during the “Revolution of Dignity,” protests in the Ukrainian capital of Kiev that led to the fall of the corrupt government of Viktor Yanukovych. After the shooting deaths in Maidan Nezalezhnosti (Independence Square) of more than 100 pro-democracy demonstrators, including 29-year-old UCU professor Bohdan Solchanyk, Archbishop Gudziak and other religious leaders of all faiths joined with the protesters and their demands for transformation of Ukraine. He said afterward: “At the moment a solution seems impossible, but I am still praying with the people of Maidan because I am part of Pope Francis’ school of thought — a pastor must have the smell of his sheep.”

Influenced early in his life by Rev. Henri Nouwen and his devotion to people with special needs, Archbishop Gudziak is especially admired for his creation of the Emmaus Center on the UCU campus, a place where people with developmental disabilities and their families receive spiritual support and share their lives with students.

In a Ukrainian Weekly story, Archbishop Gudziak said he considers the developmentally disabled “professors of human relations … We need the gifts they have. They don’t care if you’re a rector, a doctor or how rich you are. What they force us to confront is the most important pedagogical question of all: Can you love me?”

Raised in Syracuse, New York, by Ukrainian refugee parents who had fled from the communists during World War II, Archbishop Gudziak stayed close to home to earn his bachelor’s degree in philosophy and biology from Syracuse University. He then studied in Rome at Holy Sofia College and the Pontifical Urban University, earning a theology degree, after which he received his doctorate in Slavic and Byzantine cultural history from Harvard University.

Archbishop Gudziak moved to his parents’ homeland in 1992 and founded the Institute of Church History in Lviv. He was ordained to the priesthood six years later and was named vice rector and then rector of Lviv Theological Academy, the institution that four years later grew into the Ukrainian Catholic University.

In 2012, Pope Benedict XVI appointed Archbishop Gudziak as head of the eparchy serving Ukrainian Catholics in France, Belgium, the Netherlands, Luxembourg and Switzerland. He is the author of more than 50 papers on the history of the Church, theological training and other topics, and last year received an honorary doctor of humane letters degree from Syracuse.

He was appointed in February by Pope Francis the archbishop of the Archeparchy of Philadelphia — which, in addition to Philadelphia, includes the District of Columbia, Virginia, Maryland, Delaware and other areas in eastern Pennsylvania. The official installation is June 4. He also is the Ukrainian Catholic Church’s highest-ranking priest in the United States, known as the metropolitan. He remains president of UCU and chair of the board, and is a member of the permanent synod of the Church, which meets four times annually, usually in Kiev.