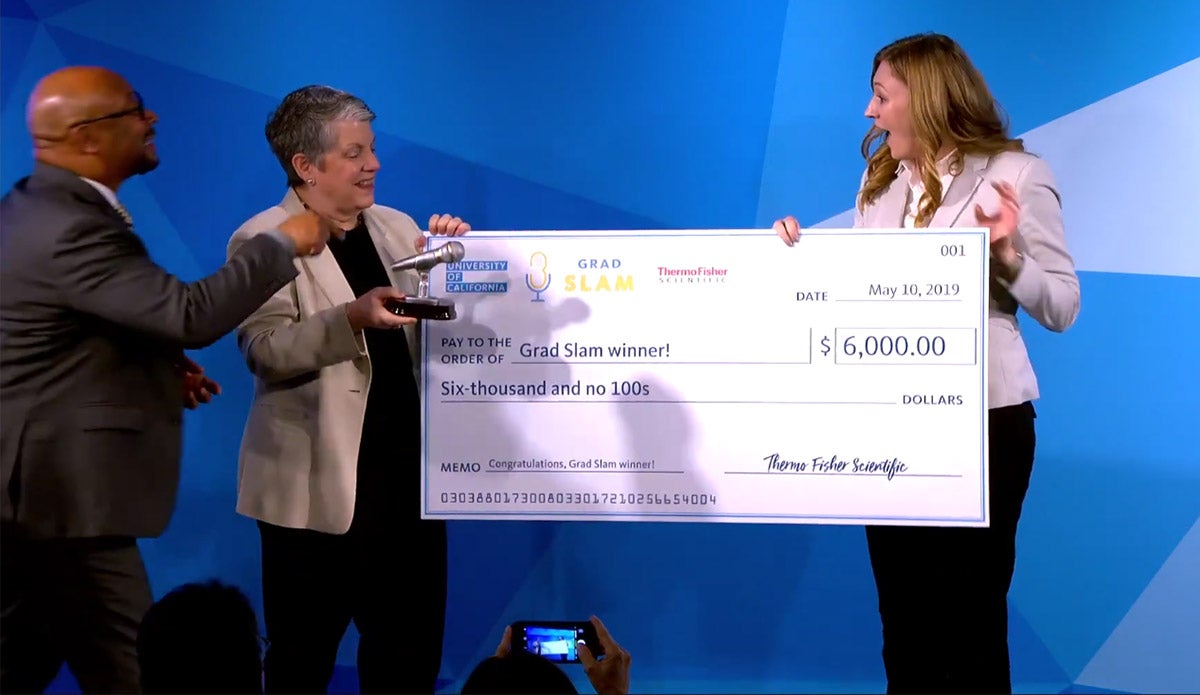 Updated 1:45 p.m. May 10: Katie Murphy of UC Davis won today’s UC Grad Slam, judged the best at summarizing her research in three minutes or less, for a general audience. She competed against other campus Grad Slam winners — and became the first UC Davis student to take the systemwide championship. Congratulations!

Original story, April 9: There’s a small, fenced-in field near the Student Health and Wellness Center on the UC Davis campus. In the summer, you might find corn growing here, and among the rows, you might find Katherine “Katie” Murphy weeding the field, hand pollinating the corn and finally harvesting it. This corn isn’t destined for the dinner table but rather the lab, where it’s used for research purposes to help feed our future.

“Corn is critical to our food supply, and the reality is that some years down the line, we have to be able to grow more food if we want to feed our growing population,” says Murphy, a plant biology Ph.D. student. Recently, Murphy was crowned UC Davis Grad Slam champion for her three-minute presentation “Call the Plant Doctor.” She’ll compete in the University of California Grad Slam Finals on May 10 in San Francisco.

Murphy studies terpenes, which are types of molecules plants produce to survive as immobile organisms. From regulating growth to defending against fungal pathogens, understanding the function of terpenes and the origins of their biochemical synthesis are important for future food security. Murphy’s research focuses on a group of corn terpenes called dolabralexins.

“We already have a lot of evidence to show that dolabralexins are important for how corn deals with disease and also drought,” says Murphy, who’s investigating their chemical structure. Murphy is unraveling how these molecules affect harmful fungi, like Fusarium verticillioides, which can cause ear rot, a condition characterized by moldy kernels.

How do dolabralexins combat these disease-causing fungi? And does the molecule’s structure and shape influence its potency? These are all questions on Murphy’s mind. But it’s not just about corn; using these corn molecules could help bolster other crops’ defenses.

Read the complete profile on the College of Biological Sciences website.