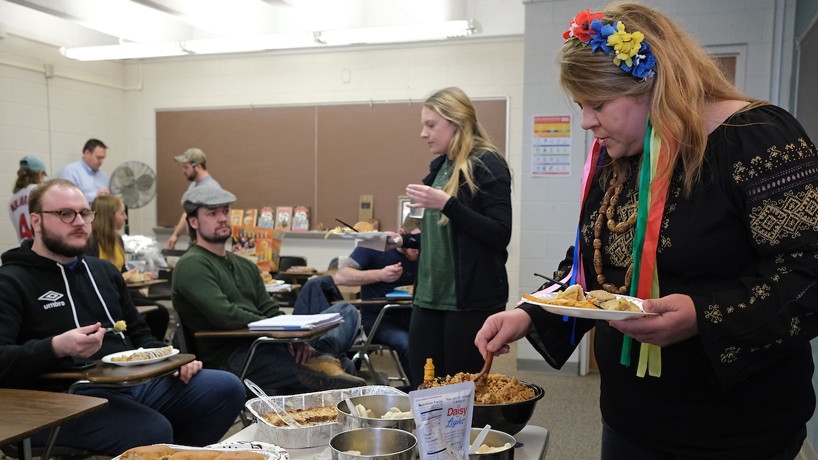 Communication and Media Associate Professor Lara Zwarun spoons rice onto a plate during an international potluck in her “Dangerous Messages” course. This semester the course has examined the way immigrant groups are presented in media. (Photo by August Jennewein)

A box of kolaches, a plate of pierogies, cannolis, candy from a piñata, a big bowl of Puerto Rican rice and some McDonald’s French fries were spread out among other dishes on desks around a second-floor classroom in Clark Hall on a Tuesday earlier this semester.

Before they and their classmates in Communication and Media Associate Professor Lara Zwarun’s “Dangerous Messages” course got up to begin filling their plates and then dig in, they sat back in their seats to listen to a presentation from classmates Daniel Tallin and Redmond Reilly. It provided some background on the Bosnian immigrants who fled their homeland as refugees in the early 1990s and settled in large numbers and flourished in St. Louis. 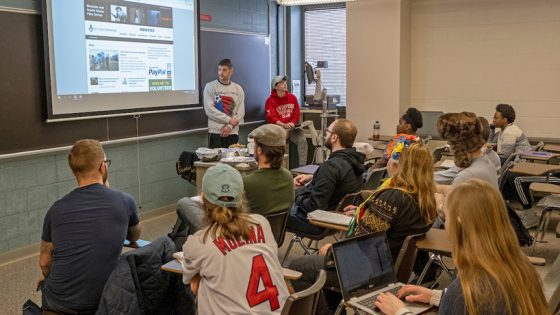 Students Redmond Reilly (standing at top) and Daniel Tallin (seated at top) deliver a presentation on the Bosnians who fled their homeland and immigrated to the United States – including many to St. Louis – amid violence in the early 1990s. (Photo by August Jennewein)

The potluck lunch was just one way that Zwarun has tried to help raise her students’ understanding of the myriad cultural and ethnic groups that have been arriving as immigrants and melting together in the United States for generations and continuing to this day.

They also took in an exhibit at the Sheldon Art Galleries showcasing work of local artists who are either immigrants or born of immigrant parents.

Those experiences helped them think more deeply about the way immigrants and immigration issues are covered in media.

“I know from teaching my students – not just this class but all my students – they don’t really know that much about what’s going on,” Zwarun said. “I don’t mean this to sound overly critical because I’m guilty of it too. They’re really not that informed in world affairs, and they don’t see the reward in knowing that information. It requires work to follow, and it can be depressing.”

“Dangerous Messages” helps students realize their views can be shaped even when they aren’t actively seeking out information. The course explores how forms of media and communication are used to promote as well as inhibit societal and individual well-being by critically examining the types of messages that are conveyed in the media they consume – including how different groups appear in advertising or entertainment programming. Students also learn those appearances aren’t always factual or accurate.

Zwarun isn’t the only communication professor who’s been trying to increase cultural awareness and understanding through courses this semester, and the Department of Communication and Media presents an ideal forum for considering these issues. 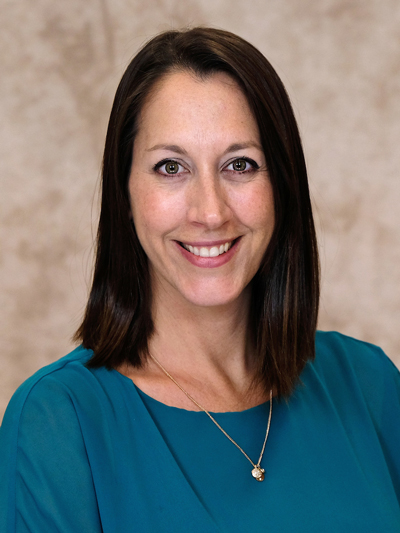 Shannon Ahrndt, an associate teaching professor of communication and media, saw the impact intercultural communication can have on an individual’s perceptions during 10 years spent teaching in South Korea. (Photo by August Jennewein)

Shannon Ahrndt, an associate teaching professor, teaches the upper-level course “Intercultural Communication,” which looks at culture as a variable in interpersonal and collective communicative situations.

Her course doesn’t only examine culture as it’s connected to ethnicity or national heritage: It also explores identifiers such as religious affiliation and the way labels affect how people are treated or perceived. One group of students, for example, researched, visited and interviewed members of the Church of Scientology for a class presentation examining the perception and treatment of its members.

But since last spring, Ahrndt has partnered with Denise Mussman, a teaching professor of English for Academic Purposes in the Department of Language and Cultural Studies. They’ve paired American students enrolled in Ahrndt’s course with international students from Mussman’s, and they met five times throughout the course of the semester.

“I think that the best way to actually break down barriers of ‘us vs. them’ – international barriers – is through actually doing things together and exposure,” Ahrndt said.

Most of the international students come from Taiwan, China and Vietnam, though there also were students from India, South Africa, South Korea and Uzbekistan.

“It’s great because a lot of them don’t have American friends or they don’t speak much English with American people, and it’s just such a great opportunity for them to practice English and make a local acquaintance,” Mussman said. “It’s strange how isolated they are sometimes with people from their country.”

The students first met for a conversation in class that served as an opportunity to get to know each other. Their second interaction was an in-class game day, where they taught each other games from their home countries. Their third meeting took place off campus at an ethnic restaurant serving cuisine from the international student’s home country or at an international supermarket.

Ahrndt’s students and their partners had a potluck of their own in April, and earlier this month they met again in class to discuss how issues of dating, marriage and family differ in their countries.

She knows how much influence these one-to-one interactions can have because she experienced it firsthand while teaching for 10 years at Seoul National University and Kyung Hee University in South Korea and two more years in Vietnam.

“I was the ‘other,’” she said. “I was this professor, and it was the only time my Korean students had ever talked to someone from the U.S. or someone from outside their own country, and I saw how important that was in terms of breaking barriers. I saw how it transformed their ideas of what it meant to be from a Western culture because they grew up hearing about and seeing our media and having these preconceptions.”

Ahrndt wound up creating interactions similar to what she does now in her classes in Korea. With fewer foreign students there to involve, she set up videoconferences with students at the University of Michigan and the University of British Columbia. She then brought the idea with her to UMSL, where she’s been able to connect American and international students in person. 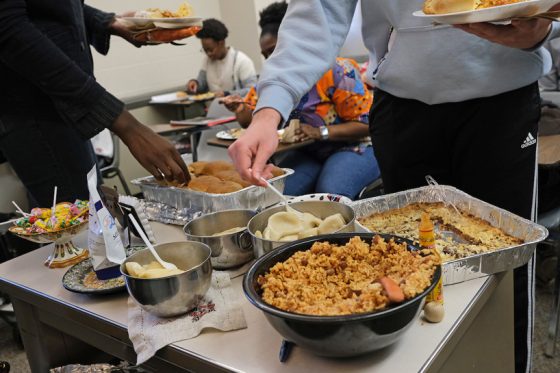 Zwarun has taught the “Dangerous Messages” course for several years. In the past, her students have dived into and discussed media coverage of events such as the 2014 shooting of Michael Brown in Ferguson and issues such as how Ukrainians are working to combat propaganda spread via social media – an area of research interest for Zwarun.

She had the idea to focus this semester’s class on the topic of immigration sometime after a lunch with a former student and colleague, during which they discussed similar harrowing experiences from their family histories about relatives escaping Eastern Europe and coming to the United States after World War II. That conversation took place amid the backdrop of relentless news coverage of migrants arriving at the U.S. southern border.

“I had this idea to make the class about immigration because so many of the topics that we would cover in the class anyway could be applied to issues of immigration,” Zwarun said. “We talk about stereotyping. We talk about how people are mentally lazy these days. They’re so inundated with information, and they really don’t like to sift through dense information, especially if it requires reading information. That makes them very vulnerable to stories that are framed or kind of succinctly summed up in an image or an attitude, including the idea of the caravan or ‘bad hombres’ or the debate about the wall.”

Like Ahrndt, Zwarun wants her students to challenge preconceptions and be more intentional about the things they think.

That includes reservations they might have about being able to relate to people from different backgrounds or cultures.

Shelley Pittman, a junior psychology major and communication minor in Ahrndt’s class, had been nervous before meeting with Indian student Palak Sondhi and later dining together at House of India.

“I’m more of an introverted person, and I worried, ‘What if she doesn’t get along with me or I don’t get along with her or we just have nothing in common?’” Pittman said. “It was a really great surprise when it was just so easy for us to talk about things and play games and get to know each other.” 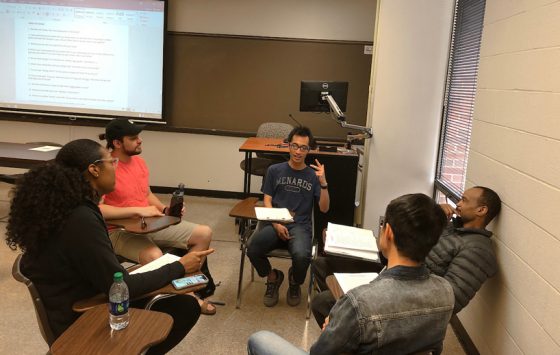 Vietnamese student Thinh Dam, center, discusses issues of family and marriage with other students, including Justin Krause (top left), as part of Shannon Ahrndt’s “Intercultural Communication” course. Krause and Dam were paired together in a class project to facilitate dialogue between American and international students and had lunch together at Mai Lee and took in a Cardinals game. (Photo by Steve Walentik)

Senior liberal studies major Justin Krause and senior economics major Thinh Dam, a native of Vietnam, had such an enjoyable discussion over lunch at Mai Lee that they decided to continue it the next day at Busch Stadium. Krause served as a tour guide for Dam’s first professional baseball game, one of the highlights of Dam’s time studying in St. Louis.

“It was so much fun,” Krause said. “I got to tell him all the stuff I did, shared stories, hung out. Thinh was so excited to go to the game. He wanted to see everything.”

For students in Zwarun’s class, the focus has been more on being aware of the implicit messages in the media they consume.

“I definitely read more into the messages being stated and why they’re being stated as well,” said Tallin, a senior communication major. “We’ve talked about framing and how it’s done to set the narrative for you.”

They’ve also learned to seek out additional sources of information.

“I don’t think I was ever the person who was like, ‘I don’t know anything that’s going on,’” junior communication major Mariah Lindsey said. “I always tried to make myself aware – whether it was entertainment or politics – of at least the current events. But I think I will probably search out more sources for even more worldwide news.”