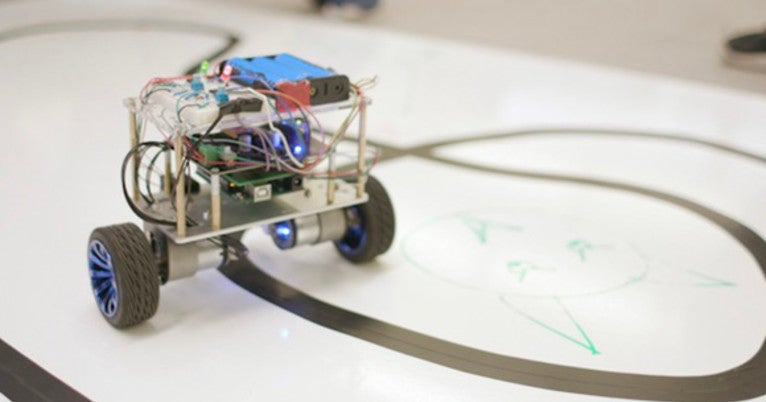 Finals can be a stressful time, but for the students of Mechatronics (MENG 390), it was a day at the races.

Tasked with the assignment of designing and building self-balancing vehicles (the dynamics are similar to those of Segways), the students soon found that controlling one of these is no easy trick.

“Trying to move forward will cause it to tip backward, but trying to upright it will cause the robot to move backward,” said the course’s instructor, Madhusudhan Venkadesan, assistant professor of mechanical engineering & materials science. “The trick is to achieve both of these goals using feedback controllers for balance and speed.”

The students then pitted their creations against each other. The first event was a straight-line dash: Stay balanced, and at the same time, go fast.

For the second part of the competition, speed and balance were still required, but the vehicles also had to follow a looping black line (inspired by Venkadesan’s recent visit to Japan, the course was loosely modeled after Tokyo’s Suzuka International Racing Course, one of the oldest remaining tracks for Formula One championships). The robots made their way through the course with the help of infrared proximity sensors that face the ground. By comparing the signals from two or more sensors, the robot commands the two motors to follow the winding track.

While the races themselves only took a few minutes, there was a lot of work leading up to it. During the semester, the students not only learned to program microcontrollers, use sensors, and drive motors, they also learned mathematical tools for designing feedback controllers.