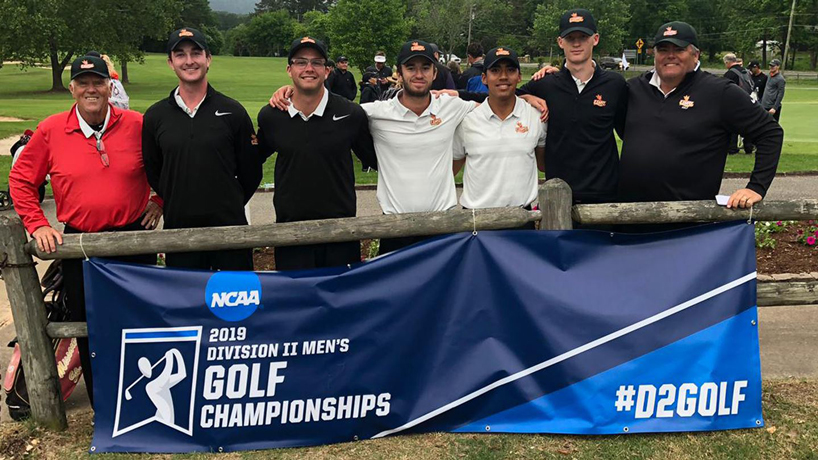 The UMSL men’s golf team shot a 54-hole score of 872 to finish second at the NCAA Midwest/Central Regional tournament and qualify for the NCAA Division II Championships.

Men’s Golf
UMSL is headed back to the NCAA Championships after recording a runner-up finish at the NCAA Midwest/Central Regional, held Thursday and Friday. It will mark the 11th NCAA Championships appearance for the program and the fifth under the direction of coach Troy Halterman. The Tritons turned in a 54-hole score of 872 (287-295-290), finishing two strokes behind champion Lindenwood. Individually, freshman Joel Sylven tied for second place, shooting a 2-under-par 214 (69-73-72), one stroke behind medalist Yente Van Doren of Lindenwood. The 2019 NCAA Division II Championships will be held May 20-24 in Daniels, West Virginia.

Women’s Golf
For the third straight year, UMSL is headed to the NCAA Division II Women’s Golf Championships. The Tritons punched their ticket with a fourth-place finish at the 12-team NCAA East Regional held Monday through Wednesday at The Pearl Club in Owensboro, Kentucky, turning in a 54-hole score of 935 (308-310-317). Perhaps the most impressive note about UMSL qualifying for nationals is that they did so with just four golfers and were not able to drop a high score. Individually, junior Emma Thorngren tied for sixth place with a 225 (75-73-77). The DII Championships will be held May 14-18 in Palm Beach Gardens, Florida.

Softball
The Tritons saw their season come to an end on Friday afternoon with a 4-0 loss to Truman State in an elimination game of the NCAA Midwest Regional Tournament at the UMSL Softball Field. That followed an 8-0 loss to Illinois Springfield in Thursday’s opening round of the regional. UMSL, the No. 2 seed in the region, finished the year with a 35-19 record. Freshman Corinne Daley logged a double in the Tritons’ loss to Truman State, and senior Madi Sundling went 2 for 2 in the Illinois Springfield loss. Over the weekend, junior pitcher Andee Tiffee earned first-team all-region honors, and senior infielder Chelsea Martinez was named to the second team.

Men’s Tennis
UMSL wrapped up its season Saturday with a 4-1 loss at No. 19 Indianapolis in first-round action at the NCAA Midwest Regional. The Tritons finished with a 14-7 record. The squad graduates one senior in Rob White, who leaves ranking third all-time on the program career singles wins list with 56 victories after his 6-4, 6-1 win at No. 5 against Indianapolis.