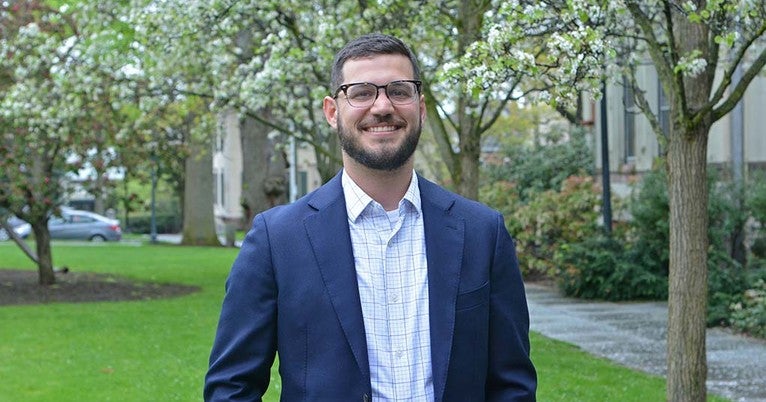 The future looked bleak to Yale student Tony Grant while he was a teenaged boy growing up in southern Mississippi. That’s not so anymore. As he and other members of the Class of 2019 approach Commencement on May 20, the 28-year-old Grant says he is filled with “all the optimism in the world.”

“This is a life-changer, and no one can take it away from me,” says Grant about earning a Yale degree.

Grant, an Air Force veteran who was in the Eli Whitney Students Program for nontraditional students, actually has a few courses to take in the fall semester to fulfill some requirements, but he will “walk” with his class.  Participating in the graduation ceremony, he says, will feel “100% surreal” given his background.

When he graduated from high school in Gulfport, Mississippi, Grant felt he had few options. He grew up in poverty after his parents’ divorce when he was 10. He and his mother moved from house to house before eventually settling in a “banged-up” trailer. During high school, he stayed with his father, now a 23-year Navy veteran.

Unsure of what field of study he wanted to pursue, Grant attended Mississippi Gulf Coast Community College on a scholarship. He decided to drop out after one year, however, because he was sure he didn’t want to accumulate college debt by transferring to a four-year school, especially while being so directionless.

“I felt the only way out of Mississippi realistically was to join the military,” recalls Grant. “I envisioned that I’d travel all over the world and have many adventures.”

In 2010, he enlisted in the Air Force. It was a time when the American economy was struggling, and few people were leaving the military for civilian jobs, which limited Grant’s Air Force job choices.

“I didn’t think I was Special Forces material, even though I was an athletic teenager who played basketball for six years,” says Grant. “I’m more cerebral.”

He was assigned to become an Arabic language analyst, and after basic training was sent to the Defense Language Institute in Monterey, California to begin study of Levantine Arabic (spoken in Syria, Jordan, Lebanon, and Palestine), which is “difficult to master,” Grant acknowledges.

His time at the institute was among the most stressful periods of his life, he recalls.

“There’s a crazy-high washout rate,” says Grant, noting that only about a third of his classmates advanced to the next phase of training at Goodfellow Air Force Base in Texas. After three months there, Grant was stationed at Fort Gordon in Augusta, Georgia, where he stayed for the remainder of his nearly seven-year Air Force career.

Grant had top-secret clearance from the U.S. National Security Agency (NSA) for his job as a cryptologic language analyst. He translated and analyzed messages and then passed along any vital information to his supervisors. While at the base, he expanded his knowledge of Arabic by also learning the Iraqi, Egyptian, and Yemeni dialects, and he was eventually promoted to the post of mission manager. Among his duties in that position was providing intelligence information to the NSA commander. During his time in the Air Force, Grant earned the Intelligence, Reconnaissance, and Surveillance Technician of the Quarter Award along with an Air Force Commendation Medal.

“Being a mission manager was pretty high stress, because if I passed along false or incorrect information, the repercussions could be monumental,” Grant says, adding that he is nonetheless grateful for his military experience, which allowed him to master hard-won skills.

Eventually eager to resume his studies, Grant began applying to colleges while enlisted, and was supported along the way by Service To School (S2S) ambassador and then-Stanford University student Sean O’Grady. S2S helps veterans gain admission to the best school possible.

Grant had not considered applying to Yale until O’Grady encouraged him to do so, pointing out that Yale is a VetLink partner. VetLink, a partnership between S2S and select colleges and universities that are committed to increasing veteran enrollment, gives veterans the opportunity to showcase their military service and accomplishments as part of their application.

When he first arrived at Yale in 2016, Grant thought he might continue his study of Arabic or pursue global affairs, which he became interested in during his military service. However, taking Professor Howard Forman’s “Health, Economics & Policy” class ignited an interest in political science as a major, and in health policy and health care reform specifically.

Grant believes that accessible health care is a human right, and he hopes to be an advocate for it in his future career. He also knows from personal experience how challenging life for him would be without Veterans Administration coverage for medication. He has an autoimmune disease called ankylosing spondylitis, which requires him to receive intravenous medication — administered over a three-hour period every six weeks — to keep him from experiencing debilitating pain and joint stiffness.

“People in non-developed countries still are not being treated for this disease,” says Grant. “The medications are a godsend. It’s a quality-of-life issue with health impacts that I worry about for any of us with this condition.”

At Yale, Grant says, he blended in well with his fellow undergraduates, even though he is about six years older than his classmates and is married. (His wife, Megan, is a social worker at a New Haven health clinic.)

“I’m like a big brother” to his fellow Yale students, says Grant, adding that he has been surprised by the maturity of undergraduates here, and that he has learned from many of them.

Grant has been active in the Yale veteran community, serving this year as vice president of the Yale Veterans Association. He is also co-president of the Eli Whitney Student Society and a member of Yale College Dean Marvin Chun’s Eli Whitney Advisory Committee. He was a 2017-2018 Veterans in Global Leadership Fellow, a program that trains and mentors veterans “on their path to becoming tomorrow’s global leaders.”

In addition, the Yale senior now serves as a S2S ambassador himself, and he has put his Arabic skills to use while helping an Iraqi family in his local church obtain housing and complete government paperwork. He also volunteered for the city’s Integrated Refugee and Immigrant Services during his time on campus.

This summer, Grant will work as an analyst with the McChrystal Group, an advisory and leadership development firm started by retired General Stanley McChrystal, a senior fellow of the Yale Jackson Institute for Global Affairs. The organization helps businesses build teams and organizational functionality to tackle “some of the world’s most complex leadership challenges,” according to its website. He previously held a summer internship at Bristol-Myers Squibb and spent another summer break working as a preservation assistant at the Beinecke Rare Book & Manuscript Library.

Eventually, Grant intends to pursue an M.B.A., and possibly an M.P.H., and hopes someday “to work in the venture capital world for biotechnology or one of the innovative pharmaceutical companies coming out,” he says.

“There is so much good science and so many people trying to make a viable product that can add 20 to 30 years to the lives of ill people,” Grant says. “I would love to be a facilitator in that. I’d love to see a cure for ALS, Alzheimer’s, or any autoimmune disease, in my lifetime.”

While looking ahead to the more immediate future — Commencement — Grant says he was reminded of an essay prompt he had as a part of his Yale application. It asked what he’d like people to be able to say of him, and he answered that he’d like to be known for caring about his peers and for his family.

“That’s really what’s of value to me,” says Grant. “Grades are important, but in in the end we all get the same Yale degree. I’d like to think that I affected some part of Yale’s culture in a positive way. I’d like some people to say ‘Tony cared about me as a person.’”