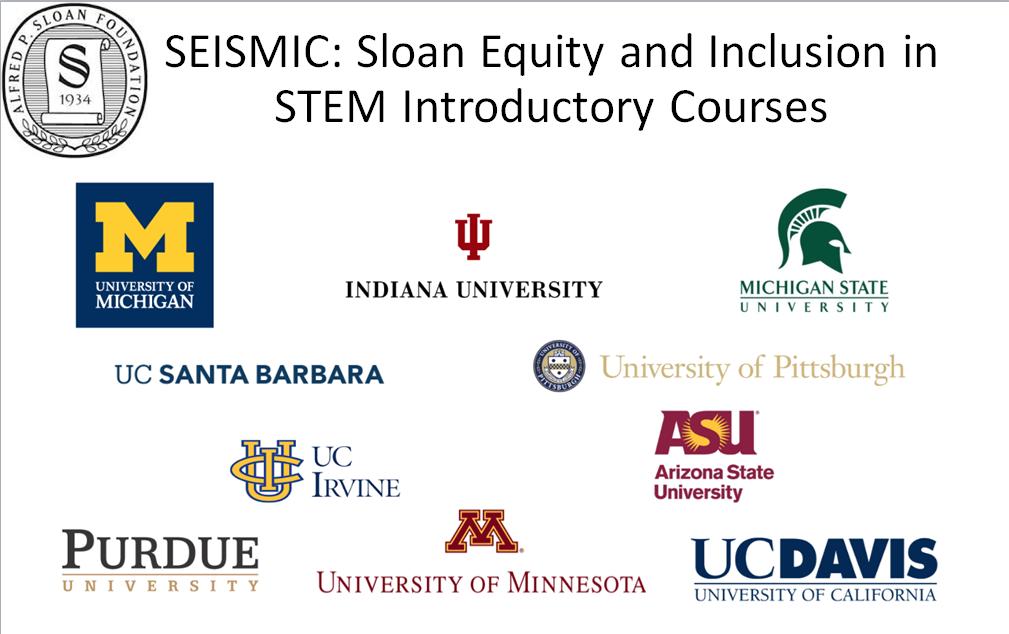 SEISMIC is represented by 10 large public institutions across the country.

ANN ARBOR—Many students attend college dreaming of careers in science, technology, engineering and math fields. At public research universities like the University of Michigan, introductory courses in these subjects are the first steps on a path to a STEM degree.

These classes are huge, enrolling hundreds—even thousands—of students. They also can be challenging, causing many students to stumble on these first steps.

As a result, students often shift course, abandoning their dreams of working in a STEM discipline, researchers say. This is especially true for students who do not see themselves represented among the current ranks of STEM professionals. When this happens, the researchers say, society loses solutions to problems these students might have addressed and discoveries they could have made.

This spring, more than 100 faculty, staff, students and administrators from 10 top public research universities have come together to address this problem by launching a multiyear collaboration focused on equity and inclusion in large introductory STEM courses. Using a million dollars in support from the Alfred P. Sloan Foundation, the Sloan Equity and Inclusion in STEM Introductory Courses (SEISMIC) project aims to “shake up” the way in which students begin their careers in STEM.

“We’re going to work on big intro courses in a new way,” said Project Director Tim McKay, an Arthur F. Thurnau Professor in physics, astronomy and education. “Instead of working in a single course, we’ll bring together instructional teams from across all the STEM fields. Instead of working on just one campus, we will gather together teams from many universities.

SEISMIC team members will organize their efforts around three scientific working groups focused on parallel analysis of learning analytics data, coordinated experiments across multiple disciplines and many institutions, and the development of improved structures for supporting intro STEM reform.

Each institution will welcome at least six speakers a year from SEISMIC partners to their campuses, creating continuous intellectual exchanges across the collaboration. To accelerate research, build community and plan the activities of the team, all 10 institutions will meet in person every summer.

Every SEISMIC campus has been grappling for years with a lack of diversity in STEM fields, the researchers say, noting that some students—women, for example—were not moving on in these areas of study.

Large introductory STEM courses are part of the fabric of research universities: each campus must introduce thousands of students to these disciplines every year. But researchers say the evidence is clear that classroom climate concerns and performance disparities contribute to these losses.

While women have made gains in some fields, they remain seriously underrepresented in the physical sciences, engineering and computer science, making up only 28% of the national STEM workforce, according to National Science Foundation statistics.

Concerns about equity and inclusion in STEM education go beyond gender to concerns about race, socioeconomic status, religion, sexual orientation, politics and generation in college. For example, African Americans and Hispanics hold only 9% and 7% of STEM career positions, respectively.

These unequal outcomes have prompted each of the SEISMIC institutions to experiment with ways of ensuring that all students succeed. One example, tested with chemistry students at UC Irvine, provides short online instructional support for students who think they need it. Solutions like this are flexible and relatively inexpensive to provide at scale.

Another example of a tool designed to increase equity in large courses is U-M’s ECoach personalized communication toolkit. ECoach uses data about each student’s background, interests, goals and current state to provide individually tailored feedback, encouragement and advice. It advises students about how to study, when and where to seek help, how to respond to bad (or good) test performance, and how to see struggle as a positive thing—desirable difficulties that lead to success.

ECoach is also a research platform, helping faculty members experiment with the best ways to advise and motivate students. It is now used by more than 5,000 students each term at Michigan, and is also supporting students at UC Santa Barbara. ECoach is expected to become a part of the SEISMIC portfolio of tools.

SEISMIC Project Manager Nita Kedharnath recently graduated from U-M, receiving degrees in both physics and secondary science and math education. She says that individual efforts of the universities have represented movement in the right direction but she expects the SEISMIC project to live up to its name as the universities share their expertise, best practices and tools.

“A key goal of this project is to set a new national standard for assessing the quality of foundational STEM courses—a course cannot be excellent unless it is equitable and inclusive,” Kedharnath said.

The first annual meeting of the groups, June 11-14 in Ann Arbor, will feature keynote lectures from AAU’s Associate Vice President for Policy Emily Miller, Purdue University’s Vice Provost for Diversity and Inclusion John Gates and Ramón Barthelemy, a physics education researcher who will be reviewing studies of inclusion for SEISMIC.