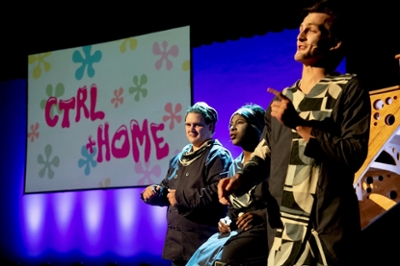 Delving into the questions of what makes us human and the nature of consciousness, coupled with the collaboration involved in the project, made the science-fiction production of “AreUR?” thought-provoking, captivating and enthusiastically received by audiences and cast members alike.

“AreUR?” was presented on SIUE’s Dunham Hall stage from April 24-28. It was an adaption of the Czech playwright Karel Čapek’s “R.U.R. (Rossum’s Universal Robots).” The play revision was conceived by Eric W. Ruckh, PhD, associate professor of history and director of the University Honors Program; Igor Crk, PhD, chair and associate professor in the Department of Computer Science, and Harper. Ruckh, Crk, Harper and DOTD students wrote the adaptation.

The success of “AreUR?” was lauded on KDHX.

“This was by far the most collaborative project that I have worked on since I’ve been at SIUE,” said Harper, who has been at the University for 16 years. “Dr. Ruckh and Dr. Crk proposed the idea, because they co-teach the class for the Honors Program. All 17 of our cast members participated in the Honors Program class. We also had two music student composers, and one mass communications student who did the video work.

Audiences were treated to seeing the play in four different genres, according to Harper. “The first scene was based on a Steve Jobs/Apple product release event, the second was a game show, the third was an abstract horror movie and the fourth act was a choral Greek tragedy.”

“We also had a good response during our Talk Backs after the show, which was a Q&A with cast members, writers, production crew, and College of Arts and Sciences Dean Greg Budzban,” he added. “I hope audiences enjoyed themselves and came away with reflecting on what it means for artificial intelligence, as well as human beings, to gain or have consciousness.”