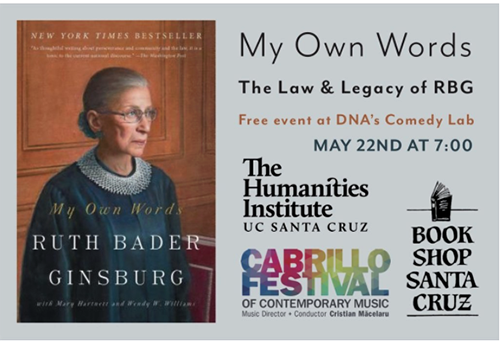 The Humanities Institute at UC Santa Cruz has joined forces with Bookshop Santa Cruz and the Cabrillo Festival of Contemporary Music to present My Own Words: The Law & Legacy of RBG–a panel discussion and Community Read kickoff event–on May 22 at the DNA Comedy Lab.

UC Santa Cruz Distinguished Professor of Feminist Studies Bettina Aptheker will moderate a conversation with Judge Syda Cogliati, Attorney Anna M. Penrose-Levig, and Attorney Jessica Delgado about the significant cases and opinions Supreme Court Justice Ruth Bader Ginsburg has championed over the course of her career, as well as the impact she has had on women’s equality, civil liberties, and racial justice under the law.

The event takes place in anticipation of the Cabrillo Festival of Contemporary Music’s upcoming premiere of a major new work inspired by the life of Ginsburg, When There Are Nine, by composer Kristin Kuster. (“When There Are Nine” is a statement Justice Ginsberg made when asked when there would be enough women on the Supreme Court).

At the same time, Bookshop Santa Cruz is also honoring the publication of Ginsberg’s book, My Own Words, edited by two law professors at Georgetown.

“We will share excerpts from the book, details of Justice Ginsberg’s life, and a few of the specific cases that are most foundational to women’s equality, voting rights, and racial justice,” said Aptheker. “We’ll also talk about the ways in which race, class, gender, and sexuality are intertwined in both law and sites of political engagement.”

Aptheker noted that Ginsburg developed brilliant legal strategies in the early 1970s when she was head of the ACLU Women’s Commission, working to advance women’s equality before the law by using the equal protection clause of the 14th amendment to prohibit sex discrimination.

Appointed by President Clinton to the Supreme Court in 1994, Ginsburg has since been a tireless defender of equality in all matters including racial justice, civil liberties, voting rights, and reproductive rights for women.

In recent weeks, both Georgia and Alabama have passed unprecedented legislation banning abortion in those states. Aptheker described the implications of these new laws for the Supreme Court and the future.

“The appointment of Gorsuch and Kavanaugh to the U.S. Supreme Court by President Trump, with the very close votes in the U.S. Senate confirmation hearings, cemented what is intended to be a conservative majority on the court,” said Aptheker.

“Likewise, and just as serious, is the over 100 appointments rammed through the Republican-controlled Senate since Trump came into office of very conservative justices on the federal courts–nearly 100% of whom are white, and almost all men, and were appointed on advice from the Federalist Society for Law and Public Policy, which has, as its expressed purpose, a conservative and libertarian corrective to what it perceives as liberal control of the courts.”

“Since Trump came into office the courts have been increasingly politicized, and made partisan corridors in a way wholly violative of the Constitutions’ separation of powers,” Aptheker added. “It is hard to predict how the Supreme Court may rule since it is widely speculated that Chief Justice Roberts may be a swing vote in certain cases, but for the time being the Court is pretty much split 5-4 as regards voting rights, reproductive rights, LBGT rights, and a host of other related kinds of issues.”

Two UC Santa Cruz alumnae will be among those joining Aptheker for the panel discussion.

Judge Syda Coglia graduated from UC Santa Cruz and UC Hastings College of the Law and has been a member of the State Bar of California since 1994. She served as a senior appellate research attorney at the Sixth District Court of Appeal before being elected to the Santa Cruz Superior Court bench in 2018.

Jessica Delgado graduated from UC Santa Cruz and Berkeley Law. She is now a career public defender currently assigned to the Homicide Division at the Santa Clara County Alternate Defender where she specializes in capital litigation.

Aptheker said she hopes that people come away from the event with a renewed sense of community, purpose and hope.

“One of the things we are planning is for those who wish to, we will have materials available to make ‘dissent collars’ similar to those worn by Justice Ginsberg in her dissenting opinions, and write on their own collars whatever they wish. We also intend to honor the other women presently on the court who are amazing in their own right–Justice Sonia Sotomayor, and Justice Elena Kagan.”

“On a personal note: I grew up in Brooklyn, New York, as did Justice Ginsberg, and in reading her biographical stories I was struck by how similar our experiences were, especially of sexism, even though I am 10 years younger than she is,” Aptheker added.

“We hope that folks will come to understand in a better way just what it was like for women and girls when we were growing up, and how far the women’s liberation movement, the civil rights and voting rights movements, and the LGBT movement have taken us. Justice Ginsberg has been an unparalleled architect of equality before the law, following in the profound civil rights legacy of Justice Thurgood Marshall.”

My Own Words: The Law & Legacy of RBG will take place on May 22 at the DNA Comedy Lab, beginning at 7 p.m. Admission is free and open to the public. This event is co-sponsored by The Humanities Institute, Bookshop Santa Cruz, the Cabrillo Festival of Contemporary Music, the Peggy and Jack Baskin Foundation for Feminist Studies, Women Lawyers of Santa Cruz County, and UC Santa Cruz Presidential Chair Craig Haney. For more information contact thi.ucsc.edu.