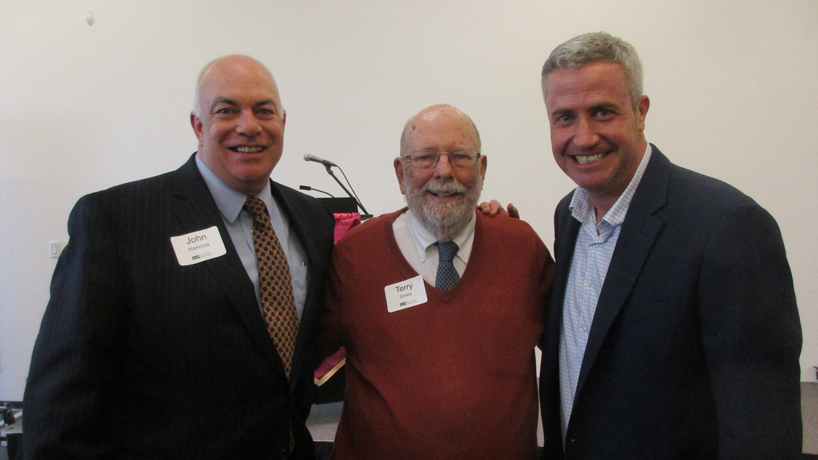 UMSL political science graduates and KMOX radio contributors John Hancock (left) and Michael Kelley (right) served as masters of ceremonies April 25 at an event to mark the 50 years Professor Emeritus Terry Jones (center) has spent in service to UMSL. The celebration was held in the Community Room at UMSL at Grand Center. (Photo courtesy of Gina Parsons)

Terry Jones had been resisting any special celebration to mark his 50 years of service to the University of Missouri–St. Louis.

“I didn’t want people to think that because there was such an event that I was hanging them up,” Jones said recently. “Because I’m not. As long as my health holds out, I’m going to keep moving.”

But the professor emeritus of political science and former dean of the College of Arts and Sciences finally relented, allowing colleagues to help commemorate the milestone April 25 with a gathering in the Community Room at UMSL at Grand Center.

It also was a chance for Jones to reconnect with a few of the legion of students he’s influenced since arriving at UMSL.

“I have literally thousands of people who have taken my courses,” Jones said. “I was very flattered and heartened to see so many of them at the celebration.”

Jones didn’t really know exactly what type of university he was coming to when he left Kansas State University to join the Department of Political Science in 1969, six years after UMSL’s founding.

He had not been looking to leave Manhattan, Kansas, having managed to involve himself in several outreach projects during his three years on faculty after completing his doctorate at Georgetown University.

He also wasn’t looking to return to St. Louis, the place in which he’d grown up since age 7, attended high school at St. Louis University High and earned his bachelor’s degree in economics at Saint Louis University.

But the opportunity to move to a more urban environment at a time of upheaval in America’s cities was too much to pass up when UMSL approached him.

“I wanted a public university that believed in a land-grant mission in its community,” Jones said.

He has made community engagement a central part of his work throughout his career and watched UMSL grow its reach.

“We’ve always helped the community by helping to educate students, and that’s always No. 1, and we’ve been doing an excellent job of that from the get-go,” he said. “But in terms of our research expertise and otherwise, we’ve done a lot of good things to improve our ability.”

Jones’ own involvement included working with the University of Missouri’s Public Policy Extension Program and helping train a new generation of community leaders as the founding director of UMSL’s Public Policy Administration Program beginning in 1976. He believed he had an ideal job during seven years splitting his time equally between those two roles as well as teaching.

But by 1980, Jones was already starting to feel a pull toward higher administration and that year was nominated for an American Council on Education fellowship in academic administration.

As part of the fellowship, Jones gained experience working as an assistant to then-Chancellor Arnold Grobman as well as Mel George, then the University of Missouri System vice president for academic affairs.

Jones then was well positioned to become dean of the College of Arts and Sciences at UMSL in 1983.

He remains proud of the community-facing efforts that occurred during his 14 years overseeing the college. Among them were the growth of the Department of Criminology and Criminal Justice into a national leader whose researchers work closely with justice systems across the region and the birth of the International Center for Tropical Ecology – now the Whitney R. Harris World Ecology Center – in partnership with the Missouri Botanical Garden and later the Saint Louis Zoo.

“I don’t want to say ‘I did this, I did that’ because that doesn’t happen,” Jones said. “But I was a part of making that happen.”

Jones was just stepping into his role as dean when current Department of Political Science Chair Dave Robertson joined the UMSL faculty from the University of Texas at San Antonio in 1983, and he has had a great impact on Robertson ever since.

“He created an environment of high-level professionalism in teaching, research and service,” Robertson said. “This atmosphere seeped into so many of us, and it energized me. He encouraged our best research, our love of great teaching and our desire to build our university and serve the people of our region.

“He mentored me and helped me grow into leadership in our department. He was always there for me, generous with advice and patient with my questions, sharing the great wisdom of his experience. Above all, he modeled the way a responsible leader should behave.”

Jones left his position as dean in 1997 and returned to teaching and research in the Department of Political Science. He authored or co-edited three books during that time – “Fragmented by Design: Why St. Louis Has So Many Governments” in 2000; “The Metropolitan Chase: Politics and Policies in Urban America” in 2003; and “St. Louis Metromorphosis: Past Trends and Future Directions,” co-edited with Brady Baybeck in 2004.

He agreed to serve a second stint as department chair from 2010 to his retirement as a full-time faculty member in 2013. But he’s kept busy since, serving as the internship coordinator for political science among other duties, and has been a sought-after analyst on numerous political topics, including recently Better Together’s proposed plan to merge St. Louis City and St. Louis County.

“I feel very fortunate because of my role here,” he said. “I’ve been in a university that supports faculty members that want to work in the community, and that’s the kind of faculty member I am. So I’ve had a variety of roles at the university in which I’ve been able to do that, and I relish each and every one of them.”

UMSL Public Policy Administration’s April 25 event to honor Jones for his 50 years of service to UMSL and the community also kicked off fundraising for an endowed scholarship in Jones’ name. Those wishing to donate can visit giving.umsl.edu/terryjones.