This is the lab’s sixth national championship and second consecutive win in 12 years.

“The 2019 project has been one of our most complex experiments to date. The challenges — both imposed by NASA and ourselves — have only been getting tougher. Six national titles in a short span of a little over a decade is an unparalleled milestone at Vanderbilt and one for the record books,” said Amrutur V. Anilkumar, director of the Vanderbilt Aerospace Design Laboratory and professor of the practice of mechanical engineering.

The Vanderbilt team will receive a $5,000 award from NASA Marshall Industry Partner Northrop Grumman for their win. The University of North Carolina-Charlotte finished in second place.

The NASA launch challenge required student teams to propose, design, build and test a reusable rocket that had to reach a team selected altitude between 4,000 and 5,500 feet. The payload had to be a drone or rover that autonomously deployed from the rocket after the rocket landed, then deploy a beacon on a future excursion area. 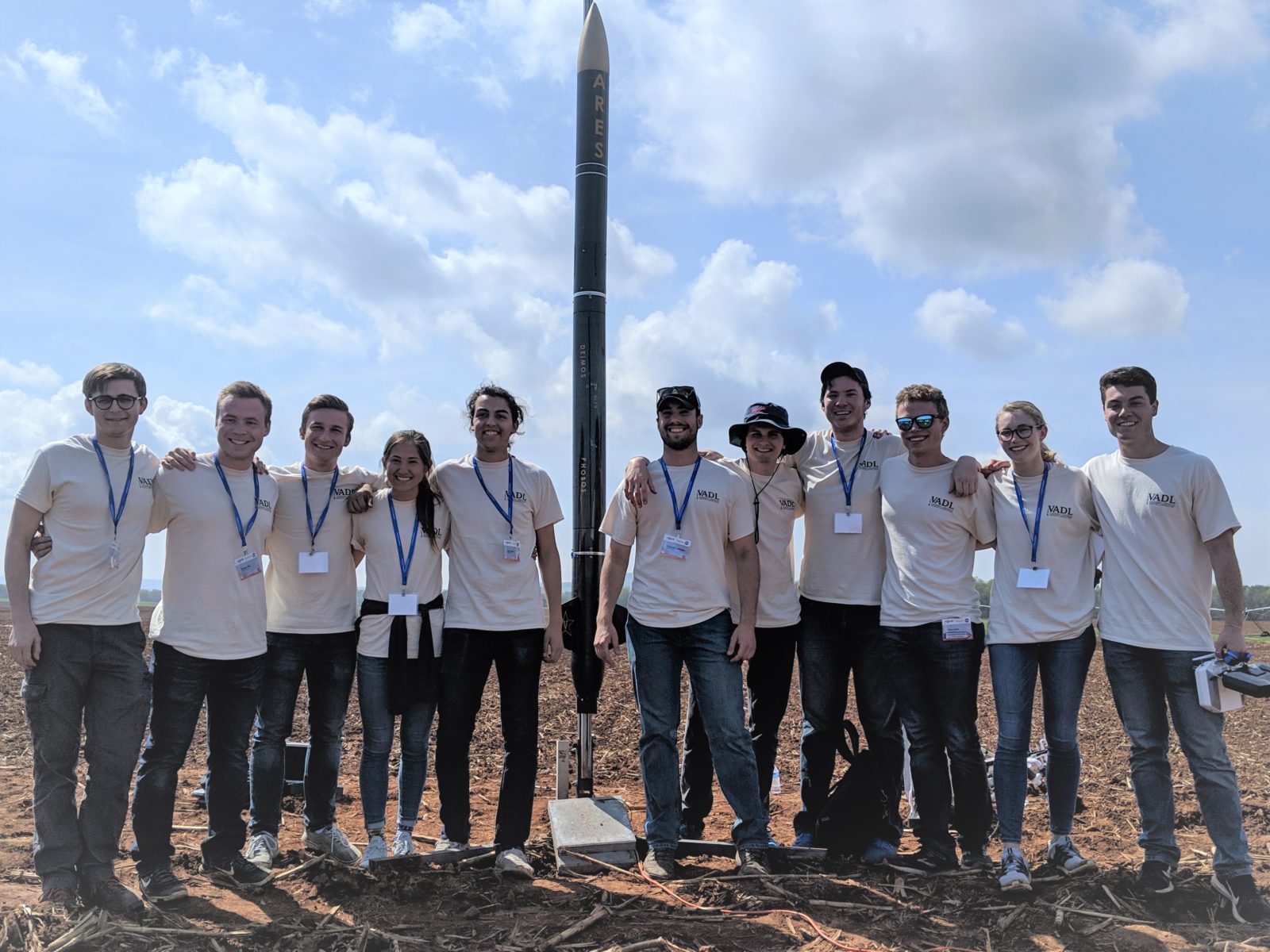 Two custom UAVs were flown at competition, one manually, one autonomously; each UAV successfully deployed from the landed rocket and dropped a beacon on the designated target.

“Our collaboration model was inspired by a mission performed by two agents with different capabilities, one specializing in cursory analysis but capable of more broad search and another with more sophisticated analytical capability but less capacity to perform large searches,” said Henry Bristol, the team’s project manager.

“This reflects a relationship between a rover and a UAV, as in the NASA Mars 2020 mission, where the UAV can easily cover a large distance in a short flight and scan the ground for major obstacles and regions of interest. It can then plan an optimal path for a rover that can perform more detailed analysis and experiments,” said Bristol, a 2019 mechanical engineering graduate.

“This year’s win has been particularly rewarding for the three team leaders Henry Bristol, Mark Scherer and Chris Romanoski, who all signed up to join VADL from their first day of classes at Vanderbilt. They had waited three long years to put a team together and take on this NASA challenge,” said Anilkumar.

The key to the VADL’s payload design was the real-time communication between hardware and software systems. “The discovered future excursion area was a trigger event for collaboration, as the first UAV identified this as a region of interest for the second UAV. Upon this trigger event, the first UAV broadcast a path to the second UAV. The second UAV was able to then take the most efficient route to autonomously reach and land on the FEA, its point of interest,” said senior Mark Scherer, payload team leader.

“This is important for planet-agnostic exploration because there is no GPS system outside of low Earth orbit and many planets, such as Mars, are not geologically active enough to have a strong consistent magnetic field like that of Earth,” said senior Sara Tsai, team member.

The 46.6 lb. VADL rocket achieved a successful launch and recovery. Electronic team lead Nick Belsten said a little wind cocking was observed at takeoff, and an apogee of 3,831 ft. was recorded.  “This apogee was slightly off from our predictions but more importantly, the rocket landed 710 ft. close to the launch rail, setting the stage for the payload experiment,” according to Conner Morency, the flight analytics team leader.

“In the reorientation of the payload bay, the autonomous reorientation system motor functioned properly, verifying the risk mitigations we had implemented during assembly and transport of the rocket,” said design team member Pierce Finley.

The bay doors opened smoothly and promptly with the force from the compression springs in the Bay Door Opening System, said Kyle Ward. “This set up a perfect base for the UAVs to takeoff and accomplish the search and deploy.”

“This foundational activity at Vanderbilt representing educational immersion, research and innovation owes its esteemed success to the high caliber of students we are able to attract, and the exciting coincidence of private sector access to Space,” Anilkumar said. “Many subsystems had to work perfectly on launch day and the perfect outcome is a testament to the team’s meticulous design, testing and planning. This team’s final report to NASA was extraordinary!”

Submitted by A.V. Anilkumar and the VADL team