Commencement 2019: 'We must be in this together. Relentlessly.' - EduBlog.News

Commencement 2019: 'We must be in this together. Relentlessly.'

Commencement 2019: ‘We must be in this together. Relentlessly.’ 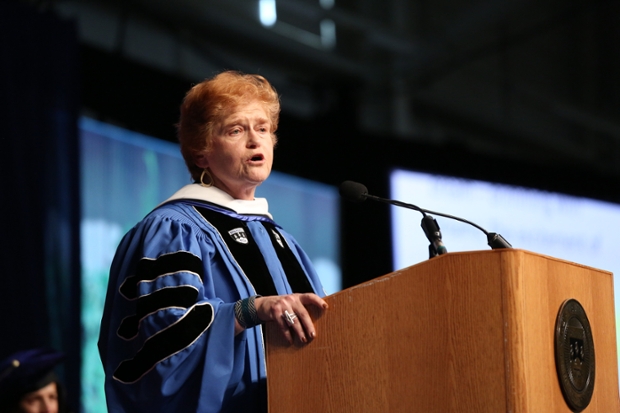 The Brandeis Class of 2019 was urged to fight hate and prejudice in all forms during the university’s 68th Commencement Sunday — even if that means breaking from political alignments or disrupting social gatherings.

“The Jew in the kippah, the Muslim woman in the hijab, the African American student walking across campus, the Latino kids gathered celebrating or just enjoying themselves in a park must feel as safe as anyone else,” keynote speaker Deborah Lipstadt, MA’72, PhD’76, told the graduates. “And if you see them harassed or mistreated, you must feel outraged, even if it is not a member of your own group suffering the insult. In the fight against evil, there are no bystanders. On-lookers are not neutral. They are complicit.”

Lipstadt is a leading authority on Holocaust denial and antisemitism. A professor of modern Jewish history and Holocaust studies at Emory University for more than 20 years, she has written eight books. “History on Trial: My Day in Court with a Holocaust Denier,” published in 2005, is her first-person account of her successful six-year legal battle with Holocaust denier David Irving.

She told the crowd inside Gosman Sports and Convocation Center that while it was a celebratory day, she could not bring herself to deliver a celebratory speech. The world today is riven by deep divisions, Lipstadt said, and she has never been more worried about the future.

“These are divisions that are rooted in hatred and in contempt. The sentiments the haters express may not be new, but today the haters feel emboldened,” she said. “They feel free to express and even celebrate their contempt for others.”

Prejudice must be fought from the bottom up, Lipstadt said, even if one becomes the “unwelcome guest at the dinner party.”

“Warn your host first that you cannot sit idly by,” she said. “You may not change the mind of your awful aunt or cousin or uncle, but you will telegraph a message to all the people there — especially, but not only, the young people — that such talk is not to be tolerated, that such ideas are beyond the pale.”

Antisemitism and other “isms” — like racism, sexism and Islamophobia — can be found across the political spectrum and must be called out, no matter what, she said.

“Fighting all kinds of prejudice, not just antisemitism is not just about scoring political points,” Lipstadt said. “And if we cannot call out our political compatriots on this issue, then how can we call out those on the other side of the political fence?”

Simply fighting the prejudices that hit most closely to home is not enough, she said.

She also called for unity in the fight against prejudice.

“We must be in this together. Relentlessly. With all our soul and with all our might,” she said. 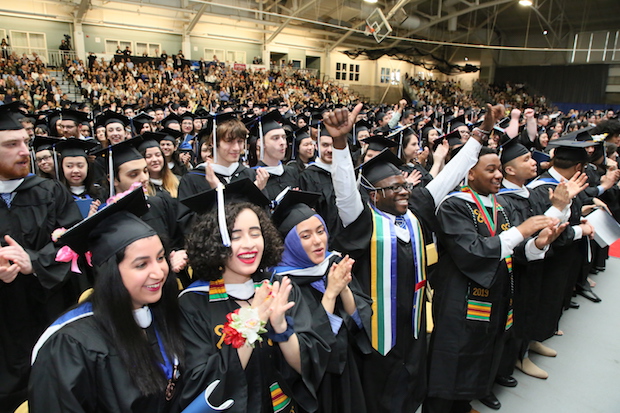 Donning caps and gowns, graduates streamed down the middle aisle of Gosman to the music of composer and former faculty member Leonard Bernstein. Onlookers shouted out their names, snapped photos and recorded video on their phones.

Liebowitz called on the graduates to find inspiration in the history of Brandeis, which welcomed Jews, women and African Americans, and hired refugees and immigrants, when these groups were marginalized or excluded from elite universities.

“The values that motivated those founders 70 years ago, rooted in the Jewish tradition, remain fully relevant and vitally important today. They shook the foundation of 20th-century higher education by ignoring quotas and inviting previously excluded students into the academy,” Liebowitz said. “They should serve as both a compass to help us chart our future, and as a mirror to ensure that we can see behind us to remind everyone of our rich and important past. And just as these values should inform our institution into the future, so, too, should they serve as guideposts in your own lives.”

Student speaker R. Matthews ’19 reflected on the individual challenges he overcame  as an undergraduate, along with his classmates.

“Take pride in your own power. That same power that pushed you through your time here will continue to push you to greatness. And I truly believe that each and every one of you sitting here today is destined for success because you are not here by chance,” he said. “You came here, and you made it. And now you have the responsibility of taking that power and using it to actually do something. We are the driving force behind our future.”

“Brandeis has given me every single thing that I aspired to. It has made my American Dream come true. More importantly, it has given me the self confidence that I always lacked,” he said. “Coming from a very small town in India, with a modest family background, I never in my wildest of dreams thought that I would get where I am today.”

“Today you do not just become Brandeis degree recipients, you also become part of a community of over 56,000 Brandeis alumni around the country and the world,” he said. “My hope is that each of you will continue to participate actively in that Brandeis community.”

A total of 881 members of the Class of 2019 received diplomas. Additionally, the Heller School for Social Policy and Management conferred 294 diplomas, Brandeis International Business School conferred 233, the Graduate School of Arts and Sciences conferred 270, and the Rabb School of Graduate and Professional Studies conferred 177.