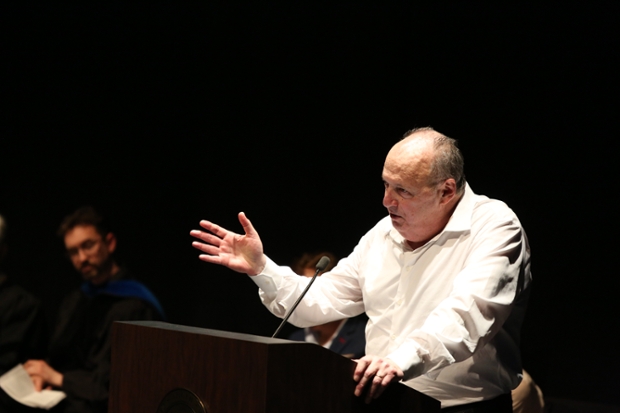 Art is life and life is art.

That was the underlying message Jon Landau ’68, H’19 delivered to members of the Class of 2019 at the Creative Arts diploma ceremony on May 19.

Landau, a Boston-area native who is now the head of the Rock and Roll Hall of Fame nominating committee and is recognized as one of the creative forces behind Bruce Springsteen’s career, also received an honorary degree as part of Brandeis University’s 68th Commencement Exercises.

“Here is my philosophy of art: I believe art is life,” Landau said. “And, without art, there is no life. So let’s all of us carry on – creating, seeking, searching and making art a part of our lives. It’s art that brings out the human in all of us.”

Landau gained fame in the rock ʼn’ roll world for being Springsteen’s manager and producer from the artist’s iconic 1975 album “Born to Run” through the 1992 releases of “Human Touch” and “Lucky Town.” He has also collaborated with artists like MC5, Livingston Taylor, Jackson Browne, Natalie Merchant, Train, and Shania Twain.

He is also a significant collector of visual art, including Renaissance, Baroque and French painting and sculpture. Works from his collection have been exhibited at the Metropolitan Museum of Art, the Prado, the Louvre and other internationally-renowned museums.

But Landau is synonymous with American rock ʼn’ roll. He was given his first guitar when he was seven years old, and became involved with the growing rock scene during his time at Brandeis. While on campus, he was a critic for The Justice and co-started a band called “The Jelly Rolls.”

He also freelanced as a music journalist while at Brandeis and even reviewed Jimi Hendrix’s first album “Are you Experienced” in the debut issue of Rolling Stone, which was released in November 1967 during his junior year.

Landau told graduates his work in journalism led him to make a discovery about himself and about the efforts to characterize, review, and describe all forms of art.

“Great is what it’s all about,” Landau said. “Great is the ability to stir people – to make them see in a way they have never seen before, to make them hear the way they have never heard before, or feel the way they’ve never felt before. The other word for this ‘great’ idea is art…I was very good at loving art and explaining it, so I channeled my knowledge and insight into writing rock criticism when the phenomenon of rock criticism had barely gotten started.”

“The artistic impulse in your mind, in your eyes, in your ears, fingers, feet, brain: that matters, and it must never be taken for granted,” Landau added. “We must remember – and I say this as an ex-critic – that no critic, analyst, essayist or journalist can ever manage to mute artistic creation – big or small, past or present, from this culture or that.”

Landau is a 2015 recipient of the Alumni Achievement Award and the creator and benefactor of the Jonathan Landau ’68 Endowed Scholarship, which is awarded to a major in the fine arts at Brandeis.