The Commencement of the Notre Dame Class of 2019 - EduBlog.News

The Commencement of the Notre Dame Class of 2019 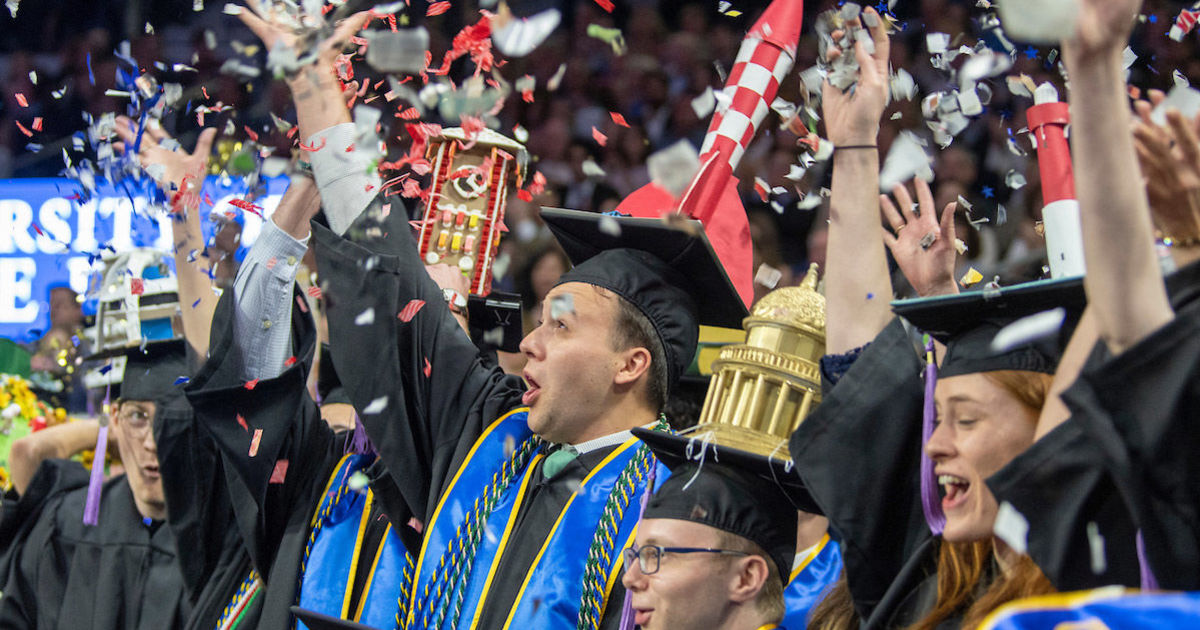 The University of Notre Dame celebrated its 174th Commencement Ceremony Sunday (May 19) at the Joyce Center, rather than Notre Dame Stadium, due to inclement weather. An audience of more than 8,000 family members, friends, faculty and graduates attended.

Introducing commencement speaker Peggy Noonan, Father Jenkins said the Pulitzer Prize-winning author and columnist is “fully capable of rapier wit and wisdom in the dismantling of a worthy opponent … but nonetheless never resorts to the vulgarity or character assassination that too often passes for legitimate criticism these days. She remains patriotic, without being chauvinistic. She believes in common decency, but is not naive. She is a critic who seeks common ground.”

Noonan began her speech by highlighting a special feature of this year’s commencement ceremony.

“I note a remarkable thing. To begin with, this institution is 177 years old … but, in all those years, it has never happened that the salutatorian, valedictorian and commencement speaker were all women,” Noonan said. “It’s a delight to be with these strong, smart women who along with the strong, smart men make this University the great thing that it is.”

For much of her address, Noonan focused on the fractured state of the country.

“I believe America needs help right now and America knows it. The reasons are so obvious that we’ve almost stopped saying them. We’ve been living through an ongoing cultural catastrophe for the last 30 years,” she said. “America is a torn-up, wounded place in need of repair. I’m not fussy about where the repair comes from and I don’t think the American people are either. They just want it to come soon.”

She urged graduates to be far-sighted and to see America’s real plight while working together with people who don’t necessarily share the same political views — urging the best of conservatism and liberalism to prevail.

“Whatever holds us together now is good and necessary and must be encouraged — whatever it takes,” she said. “The secret of successful politics is to be moved more by what you love than what you hate.”

Salutatorian and St. Louis native Annelise Gill-Wiehl, an environmental engineering major, delivered the invocation on behalf of the graduating class asking for God’s guidance as they go out into the world and “pursue work for the betterment of humanity.” Gill-Wiehl was awarded the Rev. Thomas A. Steiner Award in the College of Engineering, recognizing her for excellence and commitment to engineering and to the common good, and she was also named Notre Dame’s John W. Gardner Student Leadership Award recipient for exemplifying the ideals of the University through outstanding volunteer service beyond campus. She will pursue a doctorate in energy resources at the University of California, Berkeley.

Sofia Carozza, a neuroscience and behavior major with a supplemental major in theology and a minor in philosophy, politics and economics, delivered the valedictory address. A Marshall Scholarship recipient, Hesburgh-Yusko Scholar, Glynn Family Honors Scholar and a de Nicola Center for Ethics and Culture Sorin Fellow, Carozza will pursue a Master of Philosophy in basic and translational neuroscience leading into a doctorate in psychiatry at the University of Cambridge. She focused on three lessons she learned throughout her undergraduate education: addressing the mind, body and spirit; risking everything for others; and living reality intensely.

“Because saying ‘yes’ to a Notre Dame education has changed everything for us,” said Carozza, a native of South Bend. “It’s taught us how to live a truly human life. Only through sacrifice will we find fulfillment. We become truly human by giving of ourselves, by pouring ourselves out in love — no matter our chosen career. We are going forward from Notre Dame not as bystanders, but as protagonists of justice and mercy. So we must risk everything.”

In addition to Noonan, five others received honorary degrees. They are Carol Corrigan, associate justice of the California Supreme Court; James Poterba, the Mitsui Professor of Economics at the Massachusetts Institute of Technology; Ignacio Sánchez, longtime faculty member in the School of Medicine and president of Pontificia Universidad Católica de Chile; Esther Takeuchi, distinguished professor in the departments of materials science and chemical engineering, and chemistry at Stony Brook University and inventor of the compact batteries that power most pacemakers; and John Affleck-Graves, executive vice president and chair of the department of finance who is retiring from his administration role on June 30.

Burish honored professors who are becoming emeriti and those who won teaching and advising awards before recognizing students who won special awards and those who were receiving Latin honors. Chairman of the Notre Dame Board of Trustees John J. Brennan introduced Laetare Medal recipient Norman Francis, the former president of Xavier University Louisiana.

“As the first African American student admitted to Loyola University New Orleans Law School, you broke the color barrier for those who came behind you,” Brennan said. “As the beloved president of Xavier University for a remarkable 47 years, you built a better society by educating thousands of African American students, and, as adviser to popes and presidents, you called your Church and country to racial justice.”

Francis was raised by parents who didn’t graduate from high school and has spent his life and career trying to raise people out of poverty through education.

“Although my mother and father did not graduate from high school, they were two of the smartest people I knew,” he said. “I have such gratitude to Notre Dame for choosing me for the Laetare Medal. I’m sorry that my mother and father aren’t here today, and my wife of 60 years, and I say this to you because I was never intended to be standing at this podium, but I am here. I’m speaking not for myself but for a large number of people who never got the opportunity to be at a great university like this. Some of the greatest Americans never got the chance to go to college. I’m speaking for the people who never got the chance.”

He told the graduates that they bear a heavier burden than previous generations to heal the nation and lift people up to meet their potential.

“What are you going to do to fulfill what God intended for each one of you? You are going to have to be leaders. You can’t just sit around; you have to do something,” he said. “If it’s not you, who? If it’s not now, when?

The ceremony concluded with Father Jenkins’ charge for the graduating class and Bishop Kevin Rhoades’ benediction.

“Take what you have learned here at Notre Dame and let it enable you to go forth and do good,” Father Jenkins said. “Always be as generous as you can with your time, talent and all you have. In your family life, your professional life and your spiritual life, every day of your life, never forget that your charge as Notre Dame graduates is to be a force for good.”