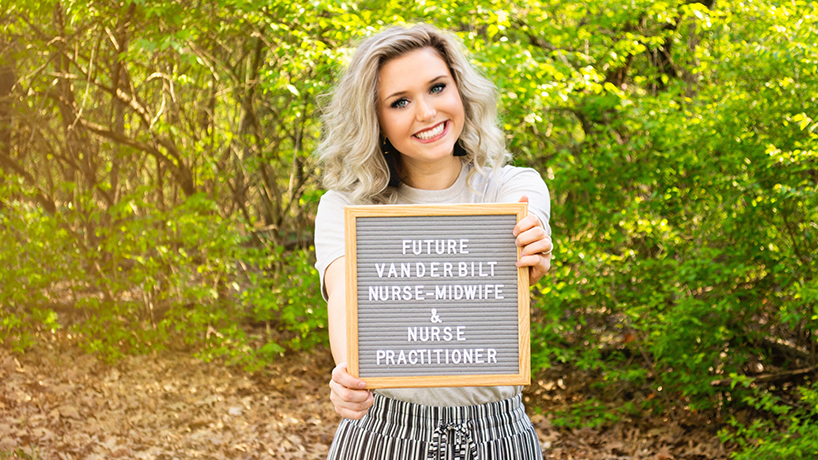 When Madison Bick pictures her favorite moments at the University of Missouri–St. Louis, introductions on Day 1 of her first College of Nursing class come to mind.

“‘I’m Madison,’” she recalled saying. “‘I’m going to be going to Vanderbilt to be a midwife because I want to’ – what did I say? – ‘take down racial disparities in maternal outcomes.’

“That’s a big one. It’s cool to look back at because it’s all happening.”

Bick came with a plan and executed it.

She will be heading to Nashville, Tennessee, in the fall for the Vanderbilt University School of Nursing Nurse-Midwifery/Family Nurse Practitioner program with plans to matriculate directly into its DNP program, which U.S. News & World Report rates as No. 8 and No. 5 in the U.S., respectively. On Saturday, when she walked across the stage in the Mark Twain Athletic Center and shook Dean Susan Dean-Baar’s hand, she did so at the front of the line as the College of Nursing student marshal.

It was quite literally her first time as a line leader.

That’s because Bick grew up home-schooled in south St. Louis County, Missouri. Being home-schooled meant a certain amount of self-driven education. At 14, Bick was thinking about going to medical school to become an obstetrician and watched the documentary “The Business of Being Born.”

It revolutionized her perspective.

The film introduced her to the pitfalls of giving birth in the United States hospital system and to the midwifery profession, which Bick sees as a unique solution to the problems outlined in “Being Born.”

“We have the highest maternal mortality rate of developed nations,” she explained. “That doesn’t make any sense. We spend the most money for the worst outcomes in this industry. Why is that happening?”

A few years later, Bick learned about race-based maternal mortality inequalities: Black women are between three and four times more likely to die from pregnancy-related causes. Even those who have identical care, education, doctors and income as white women still have worse outcomes, she explained.

Bick set out researching how to become a midwife and found nursing school. Famously squeamish, she felt her heart sink but figured she’d just get through four years so she could enroll in midwifery school.

The College of Nursing direct entry program, which accepts prospective students into the clinical nursing program based on GPA and ACT, drew Bick to UMSL. Then there was the Pierre Laclede Honors College, whose interdisciplinary approach to education gave Bick the confidence to jump into nursing despite her initial doubts.

But when Bick started her studies, something unexpected occurred.

“Much to my surprise, I loved it,” she said. “These four years have been the best four years of my life. When someone’s having the worst day of their life in front of you, you don’t care if it’s disgusting, you just want to fix them and help them if you can.

“What I’ve come to find is that the dirty work is where the heart of taking care of someone is. Those are the moments that are actually significant and when you can impact someone greatly. You get over the ‘ick’ factor in about 10 seconds when someone needs you. Somehow, I landed in the exact right spot, which is so cool and changed everything.”

Bick knows thanks to firsthand experience working as a nurse technician and student nurse at Progress West Hospital and one summer of the UMSL/BJC Summer Nurse Externship helping take care of postpartum mothers and infants.

Throughout school, she kept her eye on finding opportunities to tie her studies into her goals, such as choosing to write about the impact of midwives on the birth outcomes of women in underserved communities for her junior honors term paper.

At the UMSL Undergraduate Research Symposium, Bick presented a paper examining how breastfeeding impacts rates of pediatric obesity short and long term, finding that bottle-fed babies and breast-fed babies have opposite patterns of fat deposition, with breast-fed babies slower to gain weight.

That paper turned into an opportunity to present at the 2018 Sigma Theta Tau International Honor Society of Nursing Leadership Connection conference in Indianapolis.

At UMSL, Bick has been involved with numerous campus entities. As president of the Student Nurses Association, she’s especially proud of her newly launched mentorship program that pairs freshman and senior nursing students. In recognition of her efforts, Campus Compact named Bick a Newman Civic Fellow in 2017, and that year she led a multidisciplinary team in creating a census of community engagement data at UMSL.

Bick’s short-term goal is to do well at Vanderbilt and then implement maternal-infant care in home settings. Inspired by a center in New York that empowers its patients by having them participate in their own testing and care, she hopes to eventually work in – and maybe start her own – community-based birth and perinatal care center for low-resource women.

Though Bick has ended up exactly where she hoped she’d be, it’s also clear that her time at UMSL and in nursing school has changed her.

“If I have to identify with one word, it would be ‘nurse,’ I know that. I’m a nurse,” Bick said. “I have all the competencies and capabilities. I have the heart. That’s who I am and what I’m here for. The College of Nursing had some work to do to turn me into that, and they did so beautifully. The honors college taught me how to think critically, and nursing taught me how to care. I’m so grateful.”