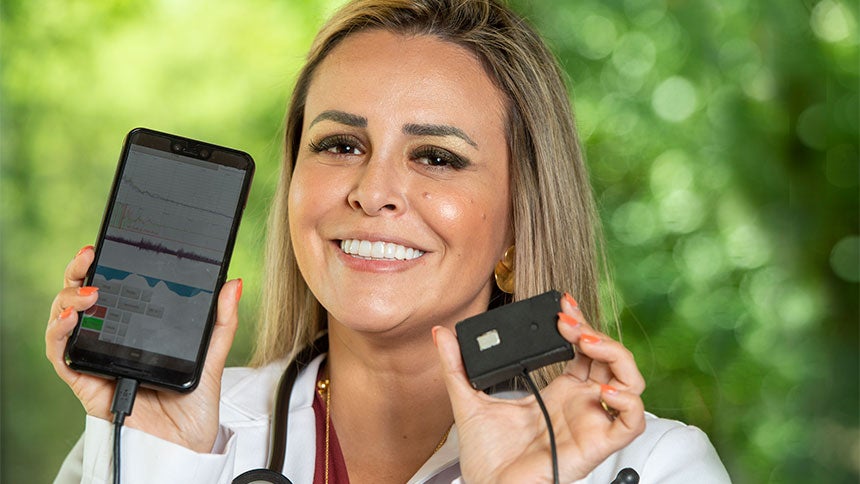 A Mountain View, California, entrepreneur who developed a device to help patients with chronic obstructive pulmonary disease, or COPD, captured the $20,000 first prize in the 19th annual Big Bang! Business Competition at the University of California, Davis, tonight (May 23). The wearable device uses acoustic sensors, real-time data and artificial intelligence to predict and prevent COPD attacks.

Maria Artunduaga, a physician scientist and CEO of Respira Labs, says her device will revolutionize COPD management. “It flags lung function changes to patients, health care providers and caregivers,” she said. “Patients will be able to act earlier at home, preventing unnecessary ER and hospital visits while preserving lung function and saving lives.”

Big Bang!, organized by the Mike and Renee Child Institute for Innovation and Entrepreneurship at the university’s Graduate School of Management, has been helping entrepreneurs start or grow business ventures for almost two decades through the competition as well as the workshops and mentoring it offers. It is open to the public.

Thirteen semifinalists from among 105 entries presented their ventures tonight. They were judged based on their integrated strategy, steps toward implementation and market opportunity. Prizes for Big Bang! — including $18,250 awarded in three Little Bang! pitch and poster competitions — totaled $110,850.

BioMilitus, a team of four graduate students and a researcher from UC Davis, captured the $7,500 People’s Choice Award and five others for a total of $22,000 and innovation lab services valued at $3,000. The business is developing the use of agricultural by-products to produce insects as nutrient-rich ingredients for feed in the poultry and aquaculture industries.

After the death of her grandmother from COPD in 2013, Artunduaga left a career in surgery to focus on public health. While pursuing a Master of Translational Medicine at UC Berkeley/UCSF, she had a eureka moment when she realized that changes in lung resonance could determine trapped air in the lungs.

Respira’s technology continuously tracks lung resonance, a new biomarker of disease evolution and the build-up to a COPD exacerbation. A change in baseline resonance signals an impending attack.

An additional $49,100 in Big Bang prizes were awarded tonight: