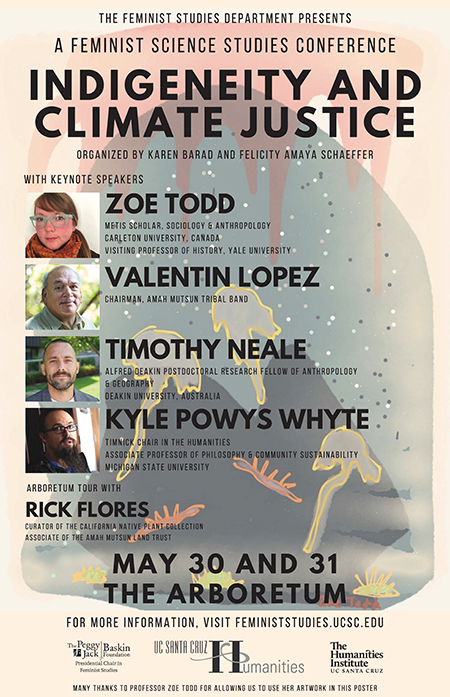 The Feminist Studies Department at UC Santa Cruz will present Indigeneity & Climate Justice, a two-day conference at the Arboretum on May 30-31.

Organized by Feminist Studies professors Karen Barad and Felicity Amaya Schaeffer, the event will feature three keynote speakers and a graduate student panel, plus a tour of the Arboretum with director Rick Flores, who is currently working on a plant restoration project in collaboration with the Amah Mutsun Tribal Band.

The guest speakers will address the politics of climate change and the consequences of the uneven distribution of its effects.

“The conference foregrounds the urgency and potentiality of thinking together about how to care for rather than manage the earth,” said Barad. “Despite some contemporary arguments concerning the Anthropocene, the earth is not simply an object in need of managerial and scientific prowess.”

“It is in this context, and by following an ethics and practice of thinking together, that our esteemed speakers will think with us about how indigenous and non-indigenous thought can articulate a different approach to climate justice–namely one that attends to the complexities and uneven distribution of responsibility and precarity.”

“While ‘environmental justice’ is without doubt an important field of inquiry and activism, its focus on the development and enforcement of environmental laws and regulations nevertheless rests on anthropocentric, that is, human-centered notions for what the term ‘environment’ denotes and the reasons for which it has to be protected,” she said.

“Climate Justice, on the other hand, emphasizes the importance of taking the entanglement of various, simultaneously occurring, and mutually constitutive forces into consideration. It is not simply the effect of a wrong decision, or of the overuse of a singular resource, or the change in temperature, or the raise of conflicts based on food and water scarcity in areas now too dry to grow wheat, or the mismanagement of monetary flow. Rather it is all the above and more.”

Barad added that the speakers at the conference will discuss why it is important to have collaborations between indigenous and non-indigenous approaches to climate change?

“Indigenous thinkers and indigenous thought have their own concepts and histories which don’t rely on Western ideas of ‘environment,’ passive landscapes, or the alleged superiority of humans who are to single-handedly shape and manage the earth,” said Barad.

“The differences in the histories of indigenous and non-indigenous thought and care for the earth are not an obstacle but the very potential of thinking together about alternative notions of climate justice. It allows us to collaboratively address the urgent questions at stake.”

“What we hope that people will take away from this event is what will also bring us all together for this event–namely, the shared concern of finding ways to think about climate justice differently and to respond to the challenges of collaborative engagements between Indigenous and non-Indigenous approaches to caring for the Earth,” she added.

The Indigeneity & Climate Justice conference will take place on May 30 and 31 at the Arboretum Horticulture Hall II. Admission is free and open to the public. For more information, the conference schedule, and speaker bios, visit the UC Santa Cruz Feminist Studies Department web site