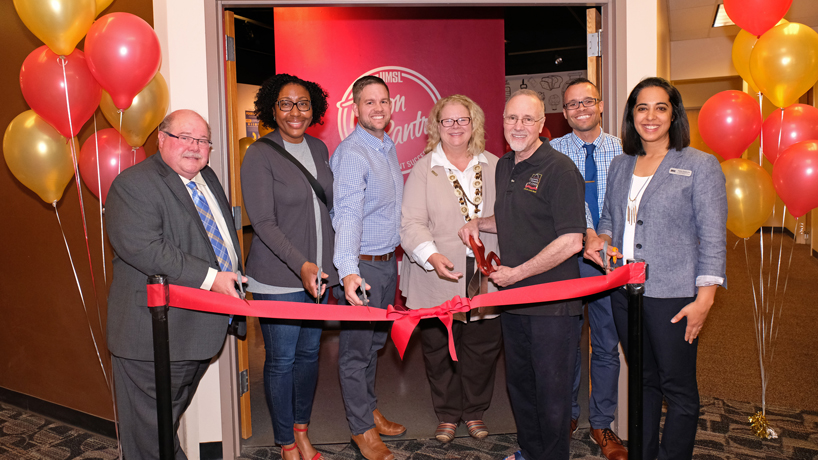 Robin Kimberlin was overcome with gratitude Thursday afternoon as she addressed the dozens of people who turned out to formally dedicate the Triton Pantry on the first floor of the Millennium Student Center at the University of Missouri–St. Louis.

The event commemorated years of effort Kimberlin has led in her role as director of student social services to combat the problem of food insecurity among UMSL students and community members – an issue that lately has been attracting attention on college campuses across the country.

“We’re really excited that you’re here, that we’re going to get to show you the space, that we’re going to get to talk about how it works and how we serve students,” Kimberlin told the audience as she spoke outside The Nosh. “Honestly, the space would be empty, it would be shelves and red-and-gray walls, if it wasn’t for everybody here and all the people that can’t be here today.”

She proceeded to thank the St. Louis Area Foodbank, Save A Lot and the more than 450 faculty and staff members, students, alumni and friends who’ve supported the Triton Pantry and made donations since it began operating last fall. 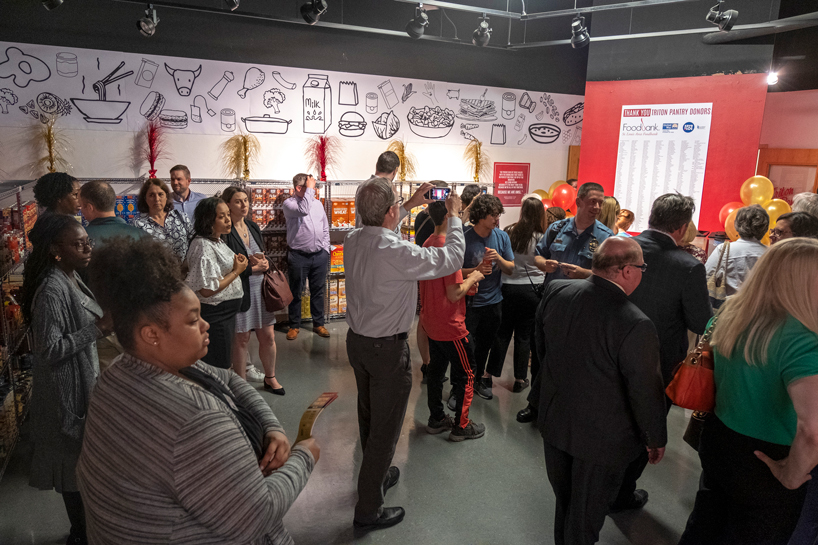 Attendees of the Triton Pantry dedication tour the space on the first floor of the Millennium Student Center.

Those in attendance Thursday then had a chance to tour the space, including walls of shelves stocked with canned or boxed food products as well as personal care items.

There’s been a campuswide commitment to making the pantry a reality over the past year, as it’s begun serving 160-180 students and other community members each month. UMSL even included the pantry in the new five-year strategic plan adopted last year.

The problem of food insecurity is not new. The awareness is.

A story in The New York Times earlier this month headlined “Tuition or Dinner? Nearly Half of College Students Surveyed in a New Report Are Going Hungry” shined a national spotlight on the issue. More than one in five students surveyed in the report at four-year institutions fell into the most severe category of food insecurity.

“One of the things that we’re about here at UMSL is we want to help solve that problem and help be a part of the solution,” Sobolik said. “We’ve made a commitment to student success.”

Kimberlin gave a presentation in April at the Missouri Department of Higher Education’s Student Success Summit in Jefferson City about the Triton Pantry and how UMSL is providing support to students in need.

She said an incident that took place earlier this decade when she was pursuing her master’s degree in social work helped bring the issue to light at UMSL. A student took some food from a donation bin on campus because she was hungry and had no money. With that weighing on her conscience, the student contacted the Division of Student Affairs and expressed a desire to donate similar items after getting her next paycheck.

That prompted Student Affairs to take action. It began by recruiting Kimberlin, then a master’s student in the School of Social Work, to lead a pilot program aimed at helping students struggling to meet basic needs. It grew into a full-time position.

When Kimberlin’s work began, UMSL’s approach to helping students facing food insecurity had been to direct them to some of the numerous pantries across the St. Louis region.

“Over time, we kind of realized that doesn’t make sense,” she said. “Our students are here. Other pantries have very selective hours and days of the week. What if our students are in class or they can’t get there? We know our students best, and they’re already here.” 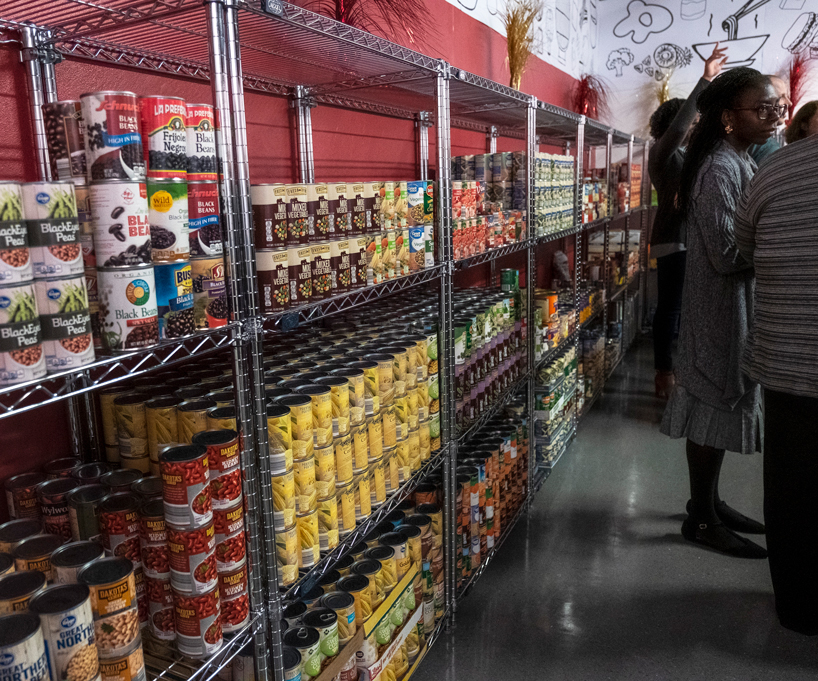 The shelves of the Triton Pantry are stocked with canned and boxed foods. Save A Lot donated an industrial grade freezer and two refrigerators that will allow the pantry to expand its offerings.

UMSL started supplying students in need with weekly snack packs about five years ago and gave out more than 800 last year with the support of the UMSL Alumni Association Governing Board and the College of Business Administration Alumni Chapter.

Kimberlin and case worker Ashley Johnson had been searching for ways to do more. Their efforts got a big boost last year after Gooden had a conversation with a UMSL student that inspired her get involved at her alma mater.

“She explained to me about food insecurity on the campus, and to be honest with you, I became sad immediately for two reasons,” Gooden told attendees Thursday. “For one, as a Foodbank employee, I said to myself, there is no reason why anybody should have to struggle with trying to feed themselves while they’re pursuing their degree. The second reason is I had no idea that this was an issue. I had been at the Foodbank for over 15 years and didn’t even know that food insecurity on campus was an issue.”

Gooden was moved to action and helped set UMSL up to pilot an on-campus pantry supported by the Foodbank.

“It is a huge opportunity for us,” Kimberlin said. “They bring us thousands and thousands of pounds of food. I think they’ve brought us – and we’ve given away – roughly 25,000 pounds of food already this year.”

A grant from the United Way of Greater St. Louis has allowed the Triton Pantry to purchase and provide food items such as fresh fruit, vegetables and bread, which it doesn’t typically receive in donations.

Save A Lot recently donated an industrial grade freezer, two refrigerators and other items that will allow the pantry to expand its offerings and provide additional resources.

UMSL moved into the space in the MSC last fall. The pantry is currently open from 11 a.m. to 5 p.m. one Wednesday each month or as individuals reach out to Kimberlin or Johnson with a need. There are plans to expand the regular hours to two days a month starting this summer.

To be eligible, students and staff only need to express a self-identified need and show a valid UMSL ID.

Over the past year, UMSL has also held a monthly mobile pantry outdoors that serves the campus community as well as people from the surrounding neighborhoods. More than 180 people utilized the mobile pantry in April.

Kimberlin wants to see it continue to grow.

“We have a slogan at the Foodbank that says ‘Fighting hunger, feeding hope,’ and I’m so glad that we could be a part of this mission because UMSL is helping us to fight hunger and feed hope right here on campus,” Gooden said. “I’m challenging everyone to make sure that you take this story, this day, this event and tell everyone about it.

“I’m also hoping that colleges across the country look at UMSL and say, ‘Hey, there is an issue. They have a model.’ We can take this, and it can become a domino effect where no college student will be hungry.”