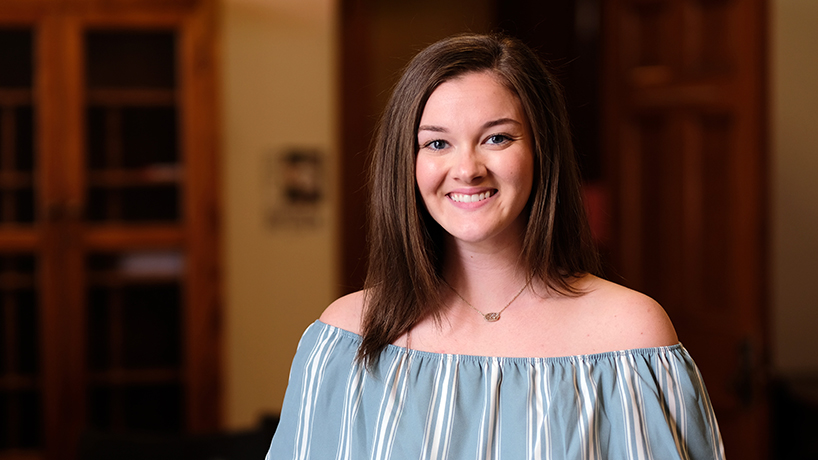 The other nominees, though ­– “seriously amazing.” She felt lucky to even be on stage with them.

Which explains the University of Missouri–St. Louis student’s shock when the emcee started describing her accomplishments.

“I was so surprised I stopped paying attention,” she said. “When they started talking about me I looked over at my board and was like, ‘Oh, my gosh. No way. No way.’ I was really excited. It was an awesome thing, and I was super thankful for it. I had a lot of people help me get to the place that I am, so it was exciting.”

Koogler, a rising senior in the College of Nursing, served as president of the Pierre Laclede Honors College Student Association during the 2018-19 academic year. The previous year she was the PLHCSA Student Government Association representative following her first brush with leadership with the Emerging Leaders Program in 2017. Koogler considers pulling off a spectacular second-year Honors Charity Ball the crowning achievement of her presidency.

Coming into her term, Koogler made following up the success of the inaugural ball a secret goal for herself. Learning party planning skills for the April 6 event forced her out of her comfort zone and into shepherding details, fundraising, advertising and selling tickets.

Along with the rest of the PLHCSA board, Koogler also set public goals at the beginning of the year. She decided hers would involve being available to help anyone anytime and to be open, transparent and honest.

Being open is important to Koogler. Sharing her motivation for becoming a nurse comes under this category.

A few years before she came into this world, her mother was diagnosed with cancer. She made it through treatment and has been in remission the 20-some years since.

But then, while Koogler was growing up, her two aunts were also diagnosed with cancer. Watching their treatment and passing had a deep effect on Koogler.

“I saw what they were going through and how their nurses helped them,” she said. “The nurses comforted us throughout, and that really helped because it was some of the worst times. I was really close with both my aunts, so it was hard to see them go through that.

“The nurses made us feel like we were going to move on, that everything was going to be OK. We would go on and live the rest of our lives just like my aunts would want us to.”

Witnessing the care being provided for her family was the last little push Koogler needed to decide nursing was for her. Plus, she felt like her big heart made her a good fit.

“I really like helping people, which is the cliché answer that any nurse will give you,” Koogler said. “I don’t know that too many other professions have that ability to be able to help people like that. Nurses gave so much to our family, I definitely knew that I wanted to give that back to other families for the rest of my life.”

The College of Nursing’s direct entry program and just-right distance from her hometown of Hillsboro, Missouri, drew Koogler to UMSL but the icing on the cake was receiving a scholarship from the Opportunity Scholars Program. Her studies have also been supported by Chancellor’s and honors college scholarships.

Though she’s looking forward to her pediatric nursing clinicals next year, one surprise of nursing school so far was psychiatric nursing clinicals and learning about the brain. Caring for psych patients differs from most nursing in that there’s a focus on emotional care and therapeutic communications, which she found enjoyable.

Long term, Koogler hopes to become a certified registered nurse anesthetist. That position requires an advanced practice degree, so she plans on working in an ICU for a few years and then enrolling in a three-year master’s or DNP program. Though she knows that program will be difficult, the challenge doesn’t intimidate her.

“You’re one of the last people that patients are going to see before they are put under, which is super scary for most people,” she said. “If I can be that positive face, that positive attitude that they hear before they go into surgery; that’s something that really appeals to me. I want to be able to tell people that they are in good hands, and we’ll be there for them and help them however we can.”

This summer, Koogler will have another chance to experience nursing firsthand during a UMSL/BJC Summer Nurse Externship. Interested in the externship program even as a freshman, Koogler got a boost from the advice of her friend and classmate Madison Bick, who’d participated the previous summer.

There have been many – Dan Gerth, honors college associate dean; Ann Torrusio, assistant teaching professor; and Nancy Gleason, associate dean emerita, among them – whom Koogler credits with helping her succeed.

“I have so many people to thank for where I am and what I’ve done so far,” she said. “I’m very lucky to have been placed here. I think this is exactly where I was supposed to be. It’s been the best experience, and I still have a year to go so who knows what else in one more year could go on.”