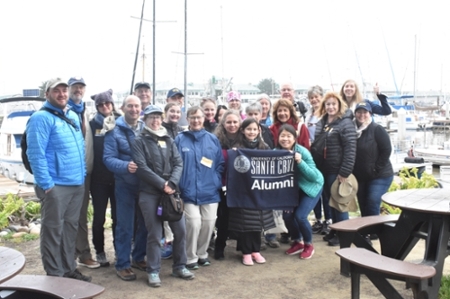 Group photo taken in Moss Landing before the whale-watching tour had begun. (Photo by Sam Li)

Alumni Excursion participants were given a behind-the-scenes tour of the world-famous Monterey Bay Aquarium. (Photo by Michael Rosenthal)

They sailed the seas and watched the giants of the deep. They were treated to behind-the-scenes tours and first-hand looks at research. They hiked along coastal bluffs to catch glimpses of seals as big as cars.

It was all a part of a first for UC Santa Cruz Alumni Excursions, a set of curated events intended to expand knowledge on particular topics.

Sustainability-minded Banana Slugs returned to UC Santa Cruz during Alumni Weekend to attend the first excursion. The trip, called “The Effects of Climate Change on Marine Life,” offered a glimpse into how UC Santa Cruz researchers are contributing to the discussion of climate change and its effects on marine ecosystems. Over a span of three days, participants engaged in selected marine activities and academic talks on the topic of climate change.

“A lot of alumni are interested in continuing education after college, and I wanted to see more interaction between UC Santa Cruz faculty and alumni,” said Alumni Council member Blair Gifford (Rachel Carson ’78, economics), who helped design the excursion. The activities focused on climate change and its devastating effects on the Central Coast region, an issue that is very close to many alumni hearts.

The excursion kicked off on Wednesday, April 24, with a talk by Gary Griggs, distinguished professor of Earth and planetary sciences at UC Santa Cruz. Griggs made a compelling case for why we should care about climate change and gave details on the daunting truth that lies before us: Unless we take serious measures to curb climate change, our planet will soon begin to dissipate.

The first full day of events began with a whale-watching tour in Monterey Bay. All 18 participants were transported to Moss Landing, where they then hopped on a boat, ate ginger cookies to help ward off seasickness, and set out into the fog. Logan Pallin, a second-year Ph.D. student in ecology and evolutionary biology, led the group on the whale-watching tour and discussed his work with the Friedlander Lab. Pallin’s work focuses on analyzing whale tissue to better understand the effects of climate change on marine mammals. He recounted the lab’s work of tracking down whales by boat and collecting tissue samples for a test they developed.

After hearing from Pallin and communing with the whales and birds out on the open waters, the crew headed to the Monterey Bay Aquarium Research Institute (MBARI), located in the Moss Landing harbor, to hear from senior scientist Ken Johnson. Johnson’s lab at MBARI is dedicated to measuring the vitals of the ocean with advanced technology.

Once the events in Moss Landing completed, the group then traveled farther south to receive a special behind-the-scenes tour of the world-famous Monterey Bay Aquarium.

The last day of events involved the trip attendees traveling north of Santa Cruz to Año Nuevo Natural Reserve for a hiking tour led by reserve director Patrick Robinson (Rachel Carson College ’03, marine biology), who spoke about the research being done by UC Santa Cruz and collaborating institutions from around the world. The hiking trail meandered along the coastal bluffs, offering great views of the dozens of elephant seals that travel to those bluffs during mating season.

Intrepid alumni from all over the country joined the excursion. The trip also attracted non-UC Santa Cruz alumni. Dwayne and Linda Downing of Soquel attended the event to learn more about the current research happening at UC Santa Cruz.

“We’ve been reading articles written by Gary Griggs at UC Santa Cruz for years,” said Dwayne. He and Linda share an interest in natural sciences and thought the trip would be an excellent opportunity to tour the marine ecosystem with preeminent researchers as guides, while learning about the effects of climate change in their coastal community.

Through the blending of academic talks and hands-on experience, “The Effects of Climate Change on Marine Life” provided its participants with the opportunity to see firsthand how UC Santa Cruz is tackling climate change and preserving the natural habitat for marine life, hoping to inspire its participants to continue conservation efforts at the individual level, as well as working toward greater climate change advocacy in the community.

If you are interested in other travel opportunities with UC Santa Cruz faculty, visit Inspired Expeditions, the university’s new travel program.