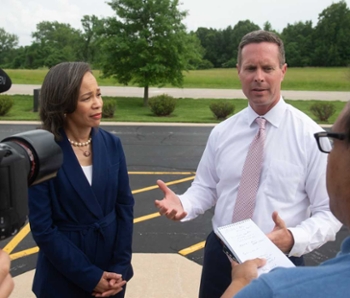 He is Republican. She is Democrat. He is white. She is African American. He is from Illinois. She is from Delaware. However, that does not mean the representatives cannot work together for the good of the country. U.S. Rep. Rodney Davis (Ill-13th District) and U.S. Rep. Lisa Blunt Rochester (At-Large) ended their bipartisan tour of the state Wednesday, May 29 at the NCERC at Southern Illinois University Edwardsville.

“I learned a lot about Lisa when she got to Washington a few years ago. We served on the House Agriculture Committee together,” explained Davis in a press conference prior to the NCERC tour. “She was part of the subcommittee I had the opportunity to chair. Companies that are involved in agriculture production in Delaware are already partnering with companies that are involved in agriculture business in my district.” 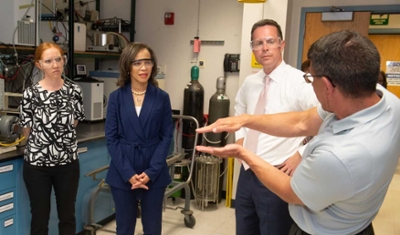 “This visit was an opportunity to show the American people that Republicans and Democrats are not always fighting each other,” added Davis. “We’re here to work together. We actually like each other, and we are not abnormal. I got to watch her view the original Emancipation Proclamation at the museum today.”

“I am the first woman and first African American to be elected to congress in Delaware,” offered Rochester. “It was a really special moment, to see those documents and understand the gravity of history and of today, and to understand we have an opportunity to do things in a way that will uplift us all.”

The American Congressional Exchange, a program that began in 2017, is operated through the Bipartisan Policy Center, according to Perman. Initially, approximately 150 representatives were identified through their statements and actions regarding bipartisan interest. The first trip occurred in January 2018, with seven trips occurring that year. Twenty trips are scheduled for this year. 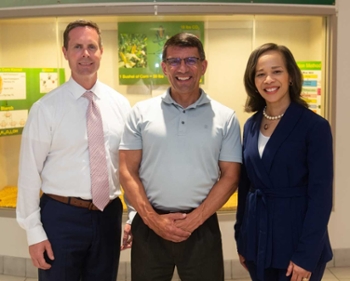 “We just don’t want them to take trips, but when they get back to Washington to continue bipartisanship through activities and cosponsoring legislation,” said Perman. “It was my idea originally. I spent the early part of my career, 30 years ago, working on Capitol Hill. I worked for the late Sen. Charles H. Percy from Illinois. He was one of the last moderate Rockefeller Republicans, and I was a Democrat based in Chicago.”

“Back then in the 1980s, it was not typical, but not unusual, to have a bipartisan staff,” revealed Perman.

“Lisa and I are part of many bipartisan groups,” offered Davis. “The mood in this country is bad because that’s all you see on the 24-hour news cycle. What we see on the floor of the House are opportunities to work together.”

Davis and Rochester are on their third Congressional Exchange trip, with the first being Davis traveling to Delaware. Then the representatives accompanied U.S. Rep. Joseph Patrick Kennedy III (D-Mass.) to Boston.

“This is a reciprocal trip,” said Perman. “He visited her, and we like to say, ‘If the date works, we’ll do a return trip.’”

“I like Congressman Davis because first of all in my freshman year, he invited all of the members of the (agriculture) subcommittee to meet with him to understand our priorities and goals,” explained Rochester. “I thought it was incredible to have leadership reach out to you. Whenever I see him on the floor of the House, he carries himself with professionalism and positivity.”

“We have found some common areas that we are going to work on as a result of these visits,” she continued. “For example, the opioid crisis is something extremely important to Delaware. We are sixth in the nation for deaths.”

“I just introduced a bill called Clean Slate. It is a bill that would allow people to have a clean slate if they served their time, and it’s a low-level offense,” continued Rochester, with a nod of agreement from Davis. “I have a Republican colleague who is my partner on it, and Rodney Davis was one of the first people who signed on.”

During the tour, Caupert gave the representatives an overview of NCERC and told them of its benefits to the campus and community.

“We opened our doors in fall 2003, with the mission to assist companies in the private sector in the commercialization of products and technologies utilized in the bio-economy,” said Caupert. “The fact that we are part of SIUE provides students with tremendous opportunities to work in an environment like this.”

“Over the past 12 years, NCERC has assisted dozens of companies in the commercializing of 70 technologies,” emphasized Caupert. “These 70 technologies are utilized across America and the world. These technologies generate in excess of $5.6 billion in revenue per year, and they are responsible for the direct employment of 5,000 peopleand tens of thousands of indirect jobs.”

“We’re pretty proud of what we do here,” beamed Caupert. “We’re impacting lives in an extremely positive way every day.”

The NCERC at SIUE is the only center of its kind in the world. Located 20 miles from downtown St. Louis in University Park on the campus of Southern Illinois University Edwardsville, the Center supports a diverse clientele, including industry clients, academia, government, technology providers, trade associations, and domestic and foreign ethanol producers. Our capable, skilled staff offers third-party validation and commercial testing of products, technologies, concepts and ideas.