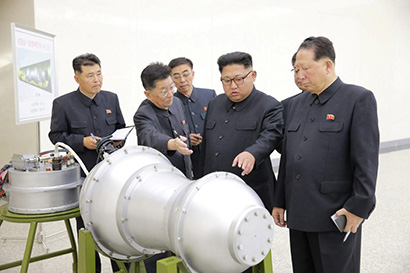 North Korean leader Kim Jong-un points to a device with the characteristic two-hemisphere peanut shape of a fusion bomb in an image released by North Korean state media in 2017. Officials in Pyonyang said the object was a hydrogen bomb. (Credit: Korean Central News Agency)

Google Earth image of the nuclear test site in North Korea looking down from south-southeast of Mount Mantap. Numbers mark the estimated locations of the six nuclear tests conducted from 2006 to 2017. (Credit: Google Earth/AGU)

North Korea detonated a nuclear device in 2017 equivalent to about 250 kilotons of TNT, a new study estimates, creating an explosion 16 times the size of the bomb the United States detonated over Hiroshima, Japan, in 1945. The new assessment of the 2017 explosion’s size is on the high end of previous estimate ranges.

The new study, led by seismologists at UC Santa Cruz, found that the 2017 test was an order of magnitude larger than the previous five underground tests at North Korea’s Punggye-ri test site. The researchers took into account the geology of the test site to estimate the size of the explosions from distant seismic recordings of the blasts. They published their findings in the Journal of Geophysical Research: Solid Earth.

“From 2006 to 2016 North Korea steadily increased the size of the events, from somewhere around 1 kiloton up to around 20 kilotons. The very early events looked like they didn’t work very well, because they were unusually small. And then in one year they jumped up to 250-ish kilotons,” said coauthor Thorne Lay, professor of Earth and planetary sciences at UC Santa Cruz. “The scary thing is that this was such a big device.”

North Korea has been testing nuclear devices underground since 2006. The 2017 nuclear test caused a magnitude 6.3 earthquake, according to the U.S. Geological Survey, and produced sound waves recorded by seismometers around the world. These reverberations are clues to the size of the blast, but determining the size of the explosion from a distance based on seismic recordings is not simple, said Lay, who has served on the Air Force Technical Application Center Seismic Review Panel tasked with advising on nuclear testing for over 25 years.

Unknown characteristics of the nuclear devices, the test sites, and their geologic context create large uncertainties in estimates of explosion size. Previously published scientific estimates of the 2017 test’s size have ranged from 30 to 300 kilotons. The U.S. intelligence community has estimated the size of the explosion at 140 kilotons according to a report in The Diplomat magazine.

U.S. intelligence typically applies an uncertainty range of a factor of two to reported estimates. A reported yield of 100 kilotons, for example, would include the caveat that it could be as small as 50 kilotons or as large as 200 kilotons. The new research puts the magnitude of the 2017 test in a range of 148 to 328 kilotons.

Steven Gibbons, a geophysicist with the program for Array Seismology and Test-Ban-Treaty Verification at NORSAR and a researcher unaffiliated with the new study, said the new research accurately determines the relative size of the six tests made by North Korea from 2006 to 2016.

“I think the uncertainty the authors quote is quite a realistic range,” said Gibbons. “The ratios between the exact numbers are quite accurate, so if the North Koreans told us, for example, that the second test shot in 2016 was exactly 25 kilotons, we could calculate the others accurately from it.”

Knowing the size of the tests relative to each other is itself useful information, Gibbons said, demonstrating steady progress in North Korea’s nuclear program.

“In 2006, when there was this little rumble, many people were quite dismissive that North Korea had the technology to do this properly, but I think from the progression we’ve seen with the increases of yield, it’s been a very well-executed weapons development program,” Gibbons said. “When you got to 2017, there’s no question that this is an incredibly destructive weapon. Even at the lower end of this uncertain yield, it’s a horrific weapon.”

A 250-kiloton explosion could plausibly be produced by either a boosted fission bomb or a modest fusion device, Lay said. The fission bomb detonated at Hiroshima released a blast equivalent to 15 kilotons of TNT by splitting apart atomic nuclei. Fusion devices, also known as thermonuclear or hydrogen bombs, derive their enormous explosive power from combining hydrogen nuclei to form helium and can yield as much as 50,000 kilotons.

The researchers had information about how sound travels in different types of rock from previous research. “There are differences, depending on the rock conditions under the test site, in how loud the sound is when you are listening far away,” Lay said. “It would be different in granite than in say, sandstone. So we calibrated by setting tests off in our own diverse rock environments and recording right next to the source.”

Other factors like the depth of the explosion, geometry of the access tunnel, tectonic history of the region, and temperature and fluid content of the rock also influence the rate at which sound waves created by the explosion are dampened, Lay said. Only a tiny amount of the energy generated by the blast is converted to sound and travels away from the test site as seismic waves.

Because of North Korea’s seclusion, details of the underground geology are not well known. The area experiences very few natural earthquakes that can reveal information about properties of the underlying rock. Researchers used satellite images and other information to estimate the type of rock at the North Korea test site.

The researchers used the explosions from the nuclear tests North Korea conducted beginning in 2006 to calibrate models of how much explosive force transferred to the rock at the test site and how the sound waves traveled through the planet.

The echo of the explosion off the surface of the test site distorts the sound recorded far away. The distortion is affected by the depth and size of the explosion. If the echo were not present, the outgoing sound from the six test explosions would be similar. The researchers used this idea to estimate the relative sizes of the bombs by finding a combination of depth and yield that compensated for the reflection of the sound from the surface.

“They’ve modeled what the reflection would look like for different yields and depths and solved for what the signal would look like if you didn’t have to account for this returning wave. The most impressive thing in the paper for me is how similar these waveforms are. This is what gives me confidence that they’ve done a good job,” Gibbons said.

The new study revived modeling strategies developed in the early 1980s to resolve suspicions that the Soviet Union had cheated on the Treaty on the Limitation of Underground Nuclear Weapon Tests by testing bombs larger than the 150-kiloton size threshold for testing they agreed to in 1974.

The treaty had been signed but not ratified by the U.S. Senate. The Reagan Administration publicly aired intelligence concerns that Russian tests exceeded the size threshold, because observed sound waves produced by the tests were bigger than known test shots at the U.S.’s Nevada test site.

But seismologists believed the signals from the Soviet tests were bigger because they transmitted through the earth more efficiently.

“The mantle under the Nevada test site is very hot and has processes that dampen down the sound. It is very different from the former Soviet test site in Kazakhstan, where the rock under the test site is old and cold and transmits sound very efficiently, without much loss,” Lay said.

During negotiations for the 1987 Intermediate-Range Nuclear Forces (INF) Treaty, U.S. and Soviet scientists travelled to the test sites in Nevada and Kazakhstan and conducted joint tests. Measurements at the test sites confirmed geologists’ methods for estimating the extra dampening effect in Nevada compared to the Soviet test site.

The new study applied some of the same methods validated in the 1980s to the North Korean tests.

“The methods were nothing particularly new. The difference is that the quality and availability of the data is much better now than 40 years ago,” Lay said.

Gibbons said the new study’s results are likely as close as scientists outside North Korea could get to the true size of the nuclear tests without data from the test sites. “I think the authors have pushed it to the limits with this paper. I would be surprised if we can get tighter constraints on the absolute yield without additional information,” he said.

The first author of the paper is Dimitri Voytan, who graduated from UC Santa Cruz in 2018 and stayed on for a year working with Lay as junior specialist to complete the research he began for his senior thesis. The other coauthors are Esteban Chavez at National University in Costa Rica and John Ohman at the University of Colorado, Boulder.