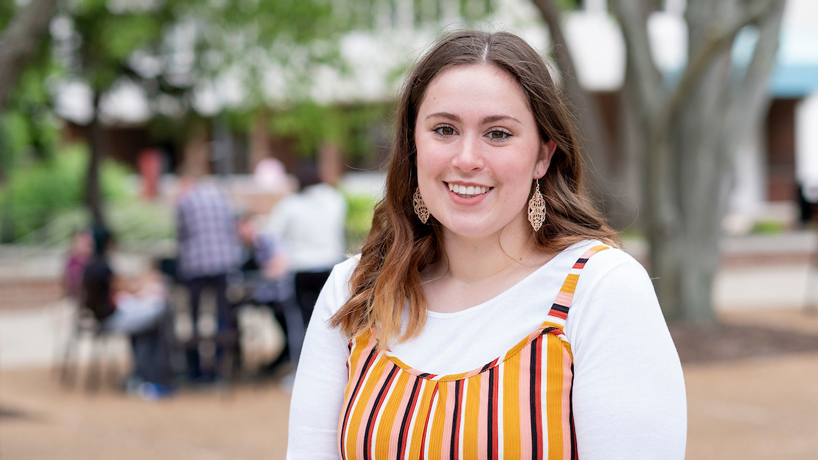 Morgan Tanner expects to graduate in December with a degree in anthropology and would like to work with refugee and immigrant groups. (Photo by August Jennewein)

Morgan Tanner can’t yet see the future that awaits her beyond December, when she expects to graduate with a bachelor’s degree in anthropology from the University of Missouri–St. Louis.

But she’d like to find herself working for a nonprofit organization assisting immigrants or refugees coming into the United States.

The type of work that lets her connect with people.

That innate curiosity and affection for those around her are what sparked Tanner’s interest in anthropology in the first place while studying at Jefferson College.

“My strong suits in school were always reading and history,” she said. “I liked those because I was good at them. But I wanted to do something that was really challenging, and that was always science for me.

“Anthropology is the perfect mix of humanities based in science and in fact. I just found it challenging and fun and interesting and unlike any other discipline that I had come in contact with. That’s what really drew me to it.”

As a first-generation college student, Tanner didn’t have a lot of guidance on how to navigate in the world of higher education, so she was unsure where her next step should be once she completed her associate degree. But a friend told her to look into the anthropology program at the University of Missouri–Columbia.

Not certain she wanted to move to Columbia, Tanner, who grew up in Pevely, Missouri, expanded her search to the broader University of Missouri System and learned of the Department of Anthropology and Archaeology at UMSL.

“It was anthropology that drew me here,” she said. “The flexibility to be a commuter student drew me here, and I knew a lot of people who had gone to UMSL and had had great experiences.”

Tanner has built connections with faculty members in the department and found a sense of community since getting involved with the Association of Student Anthropologists.

Her professors have also showed her the diverse avenues of study in the field with Associate Professor and Chair Patti Wright specializing in paleoethnobotany; Professor Susan Brownell noted as a cultural anthropologist exploring China; Assistant Teaching Professor Jennifer Nolan, for whom Tanner worked as a teaching assistant, focusing on areas such as on gender studies, popular culture and museum studies; and Assistant Professor Anne Austin working as an Egyptologist.

They’ve helped Tanner chart her own course with the knowledge they’ve passed on in the classroom and also exposed her to opportunities to go beyond.

It was Austin who tipped Tanner off last summer to the Center for American Archeology’s National Science Foundation Research Experiences for Undergraduates, an immersive eight-week program in Kampsville, Illinois.

The farming community is located on a peninsula near the intersection of the Mississippi and Illinois rivers and is home to little more than 300 residents. It is part of Calhoun County, which has fewer than 5,000 people. Both figures have been in decline.

Though it’s fewer than 70 miles from St. Louis, it takes close to one hour and 45 minutes to drive there, as it’s accessible only by a single bridge or by ferry.

The town hasn’t benefited from a lot of the technological innovation of the past several decades. There are no fiber-optic cables in the community. Internet service is limited, cell phone reception spotty.

Tanner found it a fascinating place for ethnographic study.

“What we did to gather this research was, of course, interviews,” she said. “We did walking tours. We did participant observation. We were living there in the county for about eight weeks ourselves, so we tried to really immerse ourselves and become members of the county so we could have a better understanding of these things that they were expressing.”

The people she met there were simultaneously eager to improve upon these modern conveniences and bridge more people and businesses to their community but worried about losing their close-knit community and the connection to the land that had defined it for generations.

Tanner, like any good anthropologist, empathized with their situation – one that is affecting rural communities across the United States.

She has twice presented her research, first at the Midwest Archaeological Conference last October at the University of Notre Dame and then again in March at the American Ethnological Society’s annual conference at Washington University in St. Louis.

Her mother attended the latter with her, proudly filming Tanner as she spoke as part of a panel alongside graduate students and faculty members.

“It was first of all humbling,” Tanner said. “I have a lot of pride in the work that I have been able to do and in the connections to the community I’ve been able to make and the experience overall. But it’s really humbling to hear that people have been working on their research for 10 or 15 years. They’ve put entire lifetimes into what they’re getting up and presenting before me, and that’s admirable. That’s where I would hope to be one day.”

Tanner is spending this summer as an exhibitions assistant at the Saint Louis Science Center before starting her final semester as an undergraduate.

She does not expect to be finished with school in December, however. After gaining more real-world experience at a nonprofit, Tanner plans to return with a sharper focus as she one day pursues a graduate degree.