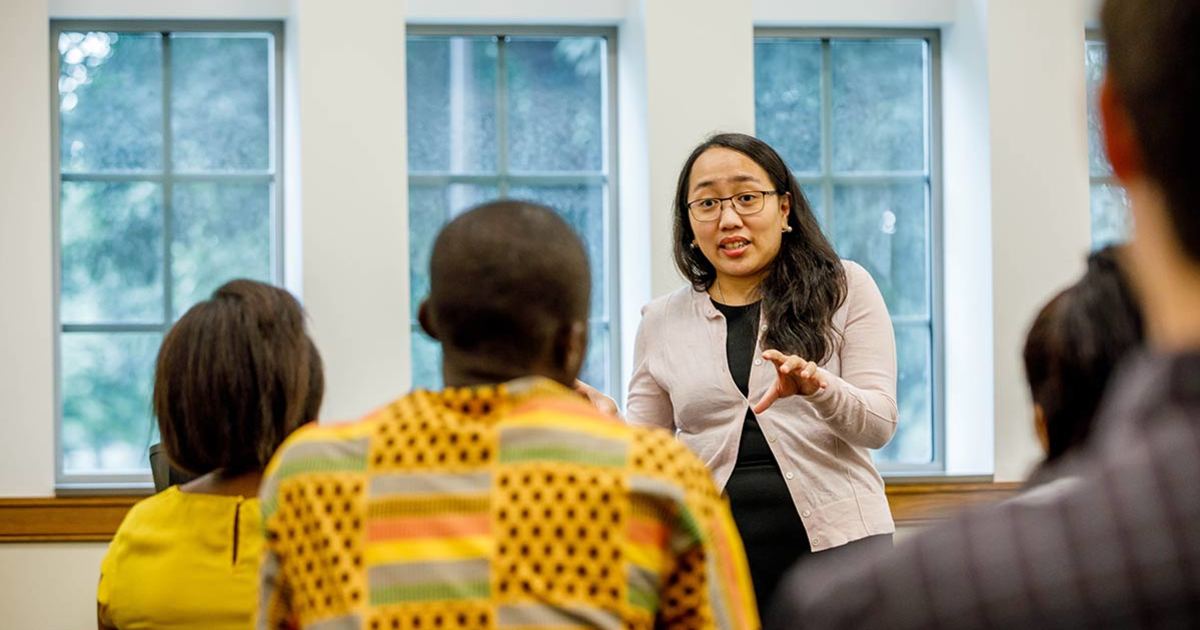 Diane Desierto, an expert for the United Nations Working Group on the Right to Development, has been tasked to assist member states in drafting a new treaty declaring development as a human right. Desierto is an associate professor of human rights law and global affairs at the Keough School of Global Affairs at the University of Notre Dame.

She recently addressed the international working group when it met at U.N. headquarters in Geneva this May. In a public event organized by the U.N. Office of the High Commissioner for Human Rights titled “Leaving No One Behind: A Right to Development Perspective,” members of the United Nations Sustainable Development Section, prominent academics and representatives of Catholic nongovernmental organizations gathered to discuss key issues that confront the U.N.’s effort to realize its development goals.

Desierto pointed to fundamental problems arising from the current design of international development systems, and she outlined current ineffective and unfair practices and systems to be corrected in the treaty process.

Anchoring her remarks on the promise of integral human development, Desierto questioned the ability of systems — as currently conceived — to deliver the broad range of benefits that the idea implies.

Of primary concern, Desierto said, is the need for vulnerable populations to be recognized by international economic dispute systems, which are designed to protect foreign investors over local communities. “We have a system that was highly developed and privileges a particular group of constituencies,” she said. “In the human rights space and particularly in environmental rights, those who are most directly impacted by tragedies that are perpetuated by the private sector have to search tirelessly for a jurisdiction where they can possibly gain redress.”

In 20 years of jurisprudence before the World Trade Organization dispute settlement system, only two cases have vindicated environmental law norms.

At the heart of the problem, Desierto said, is a failure of international economic systems to embrace the broader aims of development beyond economic growth. One indicator of this failure can be found in dispute settlement trends. “In 20 years of jurisprudence before the World Trade Organization dispute settlement system, only two cases have vindicated environmental law norms,” she pointed out. “That’s something that is of concern for every country in the world, whether the wealthiest countries or those who are highly indebted poor countries. You have a multilateral trading system which is widely perceived to be dysfunctional precisely because the gains from trade that were expected, true human rights gains, have not been realized.”

The United Nations General Assembly issued the Declaration on the Right to Development 30 years ago, where all states called for all members of society to be empowered to participate fully and freely in vital decisions affecting their political, economic, social and cultural development. The U.N. Intergovernmental Working Group on the Right to Development has been tasked by states to draft the new legally binding instrument or treaty by 2020, to be submitted for the consideration and approval of the U.N. Human Rights Council and the U.N. General Assembly.

Desierto will assist the U.N. Office of the High Commissioner of Human Rights and the U.N. Intergovernmental Working Group in the drafting of the legally binding instrument, together with Mihir Kanade, head of the Department of International Law and Human Rights at the United Nations-mandated University for Peace (UPEACE), headquartered in Costa Rica.

More on the UN’s initiative can be found at the OHCHR website.