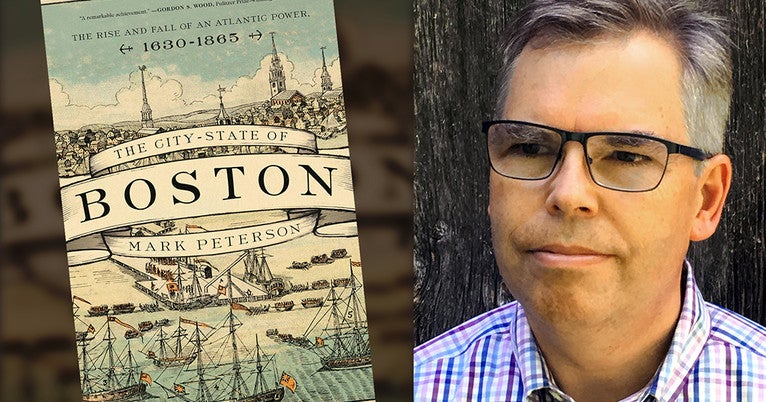 Yale historian Mark Peterson believes that history is best told by abiding by the Golden Rule.

The accurate representation of the past is “a kind of moral science,” says Peterson, the Edmund S. Morgan Professor of History, adding that the age-old adage “do unto others as you would have them do unto you” is as relevant in writing history as it is in our daily behavior.

“Historians should represent their subjects accurately and take their stories and their positions seriously. They were just as human, just as fallible, and just as uncertain of what was going to happen in the future as you and I are, and we owe them the kind of respect that we would want future historian to have towards us,” says Peterson. “This is not to say that we can’t be critical of the actions and beliefs of historical figures, but rather to remember that our capacity to assess the limitations and shortcomings of historical actors can help us to become conscious of our own.”

We frame our sense of identity in part by drawing on the stories we tell about ourselves — each of us has a historically structured sense of identity and purpose, says Peterson, a specialist in early North America and the Atlantic world. “I think the same is true with respect to societies and cultures. There is a kind of social sanity, an ability to operate effectively in the world, that comes from knowing who we are, how we got here, and what kinds of human decisions — or lack thereof — were made that framed the circumstances, the limitations and opportunities, in which we live our lives.”

This is one of the reasons that Peterson taught a course this semester on the “Origins of the U.S. Constitution”: to convey to his students, “some of whom may be on the Supreme Court someday,” that the United States Constitution “didn’t just plop down from the heavens,” says Peterson. “The creation of the Constitution was a long process involving thousands of people, engaged in arguments, fights, compromise, and dissent. It was built upon centuries of experience and conflict, and it was made by real people in response to the problems and circumstances they faced in the United States of the 1780s, a time and place very different from our world today.”

Peterson also wants his students to enjoy learning about history, as he did as an undergraduate and graduate student at Harvard University. Peterson credits Bernard Bailyn, an eminent scholar of early American history and Peterson’s Ph.D. adviser, with his decision to pursue his current area of study. The Harvard historian also greatly influenced Peterson’s style of teaching. It was in a seminar that he took with Bailyn that Peterson saw how just how much fun teaching history could be. “For [Bailyn] the intellectual process of thinking about the past, and thinking about it in effective and persuasive ways, was so fun and interesting it stimulated my own sense of intellectual creativity — I want what he’s having!”

Peterson recently published “The City-State of Boston: The Rise and Fall of an Atlantic Power, 1630-1865,” a book that has “bits and pieces” of Peterson’s Harvard undergraduate senior honors thesis in it, along with decades of further research. The book follows the development of Boston over three centuries, from its beginnings as an autonomous city-state to its conflicted and hesitant incorporation into the greater United States. In the introduction to the book, Peterson writes that the book is “not a common way to understand Boston and its history, but I did not invent it; it has been lurking in the archives, unsought and overlooked, for centuries.”

While doing research for the book Peterson took note of facts that “struck him as strange,” such as the curious evolution of a letter from John Adams, American statesman and second president of the United States, to his wife Abigail Adams. The letter underwent an almost imperceptible — but critically important — revision in language when published many years later, says Peterson.

In September 1774, John Adams attended the first Continental Congress in Philadelphia, and wrote to Abigail about his encounters with the delegates from 12 of the other 13 colonies for the first time. Adams wrote: “I flatter myself, however, that we shall conduct our embassy in such a manner as to merit the approbation of our country.”

In this letter, Adams was quite rightly describing himself and the other Massachusetts delegates to the Continental Congress as if they were ambassadors to a foreign power, explains Peterson. “And when Adams says ‘our country,’ he is referring to Massachusetts,” not the United States, notes Peterson, who adds that up until the Civil War, both nationally and internationally Boston and its New England hinterland was thought of as a separate country with its own “national” identity.

However, following the Civil War in 1875, John Adams’ grandson Charles Francis Adams published an edition of his grandfather’s letters. In that volume, the same sentence written by John Adams was changed ever so slightly — but with an enormous impact on how Boston is perceived historically, notes Peterson. In this later edition, the younger Adams changed the phrase “our embassy” to “ourselves.” The implication of this altered sentence was that “our country” now meant the United States, not Massachusetts. By this time Charles Francis Adams had served as a diplomat in England, representing the United States and working successfully to keep England out of the Civil War. “Charles Francis Adams must have decided that his grandfather could not possibly have meant to describe the Massachusetts delegation as an ‘embassy’ to the Continental Congress,” says Peterson.

“This one tiny change made by Charles Francis Adams in John Adams’ letter speaks to how the Civil War marks the transformation in the way that people understood the relation of Boston and New England to the national government,” says Peterson. After the Civil War, Boston’s centuries of hard-won and fiercely defended autonomy were largely forgotten, as its history was rewritten as simply a part of the larger American story, adds Peterson.

Last semester, Peterson taught a new Yale course, “Myth, Legend, and History in New England.” This first-year seminar encouraged students to explore many different forms and methods for remembering and representing the past. Students examined a series of iconic events from New England’s history — the “Pilgrims” of Plymouth, the Salem Witchcraft crisis, slavery and abolition in New England — and analyzed how historians, artists, poets, novelists, and others have formed and reformed our understanding of these events.

In the final project for the course, students put into practice many of the ideas and methods for representing the past that were explored during the semester, and were given the opportunity to explore the relationship between creative representation and integrity to the sources we have from the past. Peterson asked his students to be engaging while writing their assignments, but also to avoid ‘bunk’. “Our common understanding of many past events already has too much bunk,” he says.

“If you take seriously the moral reality of historical subjects as equal to your own and write about them with the respect they deserve, I think that is a valuable skill in terms of how you conduct yourself in your daily life,” says Peterson. “In that regard, I see a serious engagement with the humanities as the most essential thing that anyone can pursue in college. Even subjects that we don’t always associate with ‘the humanities’ such as engineering, computer science, and chemistry deserve the kind of scrutiny that humanistic thinking teaches, the capacity to imagine and interrogate how the discoveries we make and the things we invent will shape the lives, for better or worse, of real human beings like ourselves, our fellow inhabitants of humanity’s only planet.”