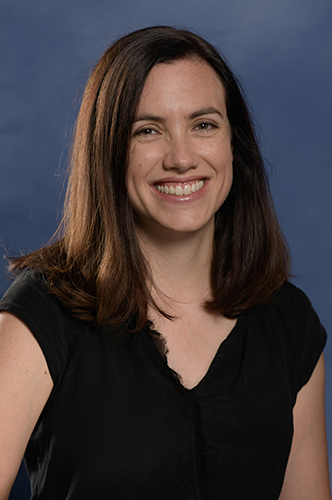 Jessica Conroy has received a CAREER grant from the National Science Foundation to study water patterns in the Pacific Ocean.

Conroy was awarded the CAREER Award from the National Science Foundation (NSF) to investigate past patterns of the water cycle in the tropical Pacific. Under the grant, which is awarded to promising junior faculty members, Conroy will collect field data in the Galápagos, a collection of islands on the eastern side of the Pacific near South America, and Palau, a collection of islands on the western side of the Pacific near the Philippines. The grant also supports Conroy’s teaching.

“I’m a paleoclimatologist, so I’m very interested in understanding how the climate system works on a longer time scale,” Conroy said. “That can mean a decade, centuries, or thousands of years. Water is a necessity for humanity and ecosystems, you name it, everything. Understanding long-term changes in rainfall and evaporation is vital.”

Conroy said that while scientists generally agree that the Earth is experiencing climate change, how these changes will affect rainfall remains unknown.

“We don’t truly understand how long term, mean patterns of precipitation and evaporation are going to change in many places,” Conroy said. “Some changes we do, some changes we don’t.”

Conroy said that model simulations agree, for example, that the American Midwest will likely get wetter, but her own region of expertise, the tropical Pacific, remains a “mixed bag.”

Conroy said collection and measurement of stable oxygen isotopes of modern precipitation and seawater samples has increased in the last decade as new technology has sped up the measurement of water samples. Analyses of these modern samples is essential to correctly  interpret ancient oxygen isotope ratios preserved in paleoclimate archives. Still, she said there’s a hole in their knowledge that needs to be filled.

“I first got into this particular topic because I realized that a lot of the ways we interpret this paleoclimate variable, these oxygen isotope ratios, are based on very little, modern data,” Conroy said. “And to really have a robust understanding of how climate varied in the past, you better know what this variable is really telling you.”

Previously, Conroy investigated the relationship between this variable of oxygen, which is denoted as O-18, and the amount of rainfall measured during those time periods. Most of the scant isotope data from the tropical Pacific was collected in the 1950s through the 1980s.

“If you measure this variable and there are lower values, that indicates a period of greater rainfall in the past,” Conroy said. “So why is more rainfall correlated with this lower O-18? I can’t say we’ve completely found the resolution but my work has pointed to the fact that evaporation of rain during storms, the recycling of rain during storms, and the vapor going back into systems could be driving this relationship.”

Conroy will include undergraduates in this research by participating in the NSF program, STEMSEAS, through which undergraduate students from across the country will travel on an NSF research vessel and collect seawater samples that can be used for Conroy’s research.

“They will get to be a part of my research and take samples,” she said. “I’m hoping to go on a bunch of the cruises and to be a mentor.”

Conroy hopes that some of these students will attend Illinois for their graduate degree. Additionally, she will teach a research-based undergraduate class about the relationship between stable water isotopes and water cycle changes. One iteration of the course will have the students using preexisting data, and the second class will use data they’ve collected and measured themselves.

The grant will also provide Conroy with an instrument to measure the variable O-17, a still relatively new and unexplored oxygen isotope that may further unravel the mystery of how the tropical Pacific’s climate will evolve.

“The reason we focus on this one area of the world is that if you change the balance of temperature or rainfall in the tropical Pacific, those changes ripple across the atmosphere and actually impact global climate,” Conroy said. “It has major implications for global climate, and I think it’s also the case for long term time scales.”