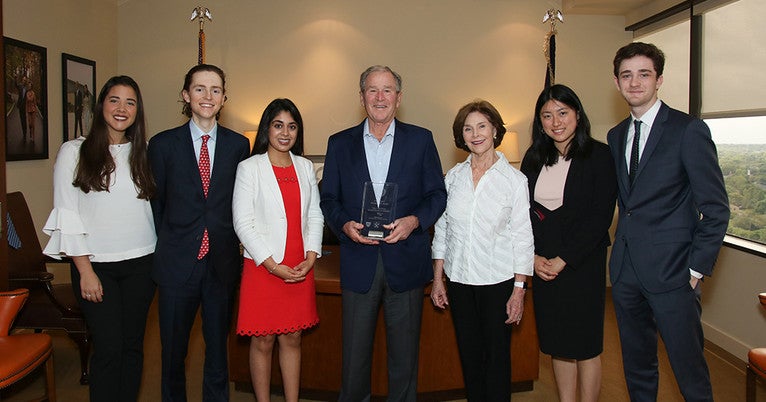 A delegation of students from Yale traveled to Dallas, Texas on April 29 to award President George W. Bush ’68 B.A. with the Yale Undergraduate Lifetime Achievement Award, administered by the Yale College Council (YCC).

Just four years ago, President George H.W. Bush ’48 B.A. received the first of these awards, which honors a graduate of Yale College for his or her excellence in a field of work. According to outgoing YCC President Saloni Rao ’20 B.A., the Yale Undergraduate Lifetime Achievement Award “is the only award in the Ivy League entirely selected and administered by students.” In addition to the father and son presidents, awards were given to Academy Award-winning actress Jodie Foster ’85 B.A. (2018), celebrated architect Maya Lin ’81 B.A., ARC ’86 (2017), and Emmy Award-winning journalist Anderson Cooper ’89 B.A. (2016).

Rao emphasizes that the award is “very much chosen by undergraduates” via a large marketing push across email and social media. In addition to Bush, this year’s nominees included journalist Fareed Zakaria ’86 B.A., ambassador Samantha Power ’92 B.A., and economist and professor Paul Krugman ’74 B.A. Over 1,000 students ultimately voted.

“The idea of the award is to talk to someone who has made a significant contribution to any field,” Rao says. “To find out about their life and how Yale College shaped their life path.”

Bush opted to have the award presented in his home state, and the YCC held a drawing for undergraduates who wished to travel as part of the delegation, a trip funded by the YCC. More than 1,500 students submitted entries for three available spots. In addition to Rao and Heidi Dong ’20 B.S., university services policy director of the YCC, the delegation included contest winners Duncan Moore ’20 B.A., Isaiah Affron ’20 B.A., and Valentina Wakeman ’20 B.A.

Rao says the students were welcomed warmly by the President, who encouraged them to share their stories. “It was a really candid conversation that will stay with all of us,” she says. “Everyone that goes to Yale has a common set of powerful experiences.” She said the President spoke highly of the friendships he formed at Yale, calling them the most significant of his life. “The fact that someone who has had all of these incredible experiences and devoted himself to public service still holds in his heart his friends from Yale is really powerful,” Rao says.

On receiving the award, Bush sent the following statement: “I am honored to have received the 2019 Yale Undergraduates’ Lifetime Achievement Award, and I’d like to thank the Yale College Council. Yale helped shape me as an individual, and I am grateful to be recognized by my alma mater. I’m also proud to join the august company of ’41, Anderson Cooper, Maya Lin, and Jodie Foster in being recognized. Boola Boola!”