Brandeis alumni and friends returned to campus to reconnect with their alma mater and one another. 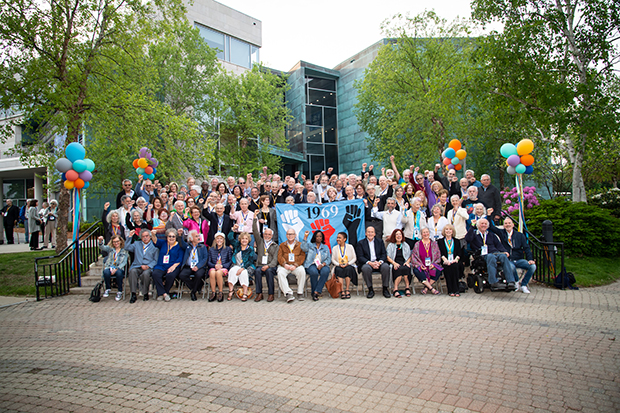 The Class of 1969 celebrated their 50th Reunion and their lifelong commitment to activism and social justice.

The second annual Brandeis Alumni Weekend May 31-June 2 drew hundreds of alumni and friends back to campus to reconnect with Brandeis and each other. In addition to celebrating milestone reunions, from the Class of 2014’s 5th to the Class of 1954’s 65th, the weekend brought together media aficionados to honor the 70th anniversary of The Justice.

“The new format of Alumni Weekend, launched last year, allows alumni to reconnect with one another over what mattered most to them as students,” said Patsy Fisher, vice president of alumni relations. “Whether that was being an editor for The Justice or a neuroscience major, we want to help alumni celebrate their lasting connections to Brandeis.”

Among the new events this year was the first ever Media Reunion, which brought together alumni working in media with current and former members of media-related student clubs like The Brandeis Hoot, The Justice, WBRS and more. To commemorate 70 years of news, former Justice editors and contributors partnered with current students to publish an alumni anniversary edition of the campus newspaper.

On Saturday evening, President Ron Liebowitz shared a university update before presenting Granik with the 2019 Alumni Achievement Award. Perhaps best known for her Academy Award-nominated film Winter’s Bone, which starred then-newcomer Jennifer Lawrence, Granik spoke with President Liebowitz about her practice of visual anthropology and how she uses her films to bring often overlooked issues, people and places to the forefront.

Granik joins a distinguished community of trailblazers and risk takers who have received the award since 1988. President Liebowitz recognized past recipients who were back on campus celebrating reunions, including Marder, Mossberg and Joel Schwartz ’69, PhD’80.

The Class of 1969 had a large turnout to celebrate its 50th Reunion, gathering many times over the weekend to reminisce about being at Brandeis during a pivotal time in American history.

“We were the class of the 60s, from ’65 to ’69, from Dylan goes electric to Woodstock basically, then everything that happened in between, the assassinations and the war and so on and so forth,” said Bob Shuman ’69, a member of the 50th Reunion committee, along with his wife Sheila Shuman ’69.

The class fundraising efforts speak to a personal ethos shared by many classmates. “I think all of us have been involved in wanting to make the world a better place in all different ways,” Sheila Shuman said. “Even those of us you could look at and say they’re just regular, suburban parents or grandparents with jobs, I think inside that idealism is still very much alive.”

Fighting for Venezuelan refugees in Argentina