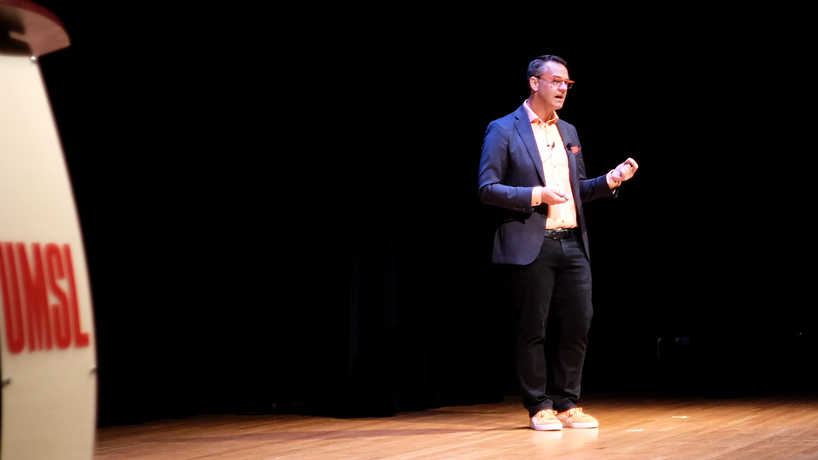 Krister Ungerböck spoke to a crowd of around 200 people in the J.C. Penney Auditorium as part of UMSL’s “Focus on the Future” Staff Enrichment Day on June 4. (Photo by Steve Walentik)

During his career as a CEO, Krister Ungerböck found it difficult to separate family and business. Circumstances made it nearly impossible: He helped lead a software company that his family owned.

In his current career as a keynote speaker and CEO coach, though, Ungerböck finds that being a good business leader and being a good family member share a remarkable number of similarities.

That’s the lesson he imparts in his upcoming book – “The Language of Leadership: Words to Transform How We Live, Lead and Love” – and in speaking engagements such as the presentation he gave as part of the University of Missouri–St. Louis “Focus on the Future” Staff Enrichment Day on June 4. Ungerböck spoke to around 200 attendees in the J.C. Penney Auditorium.

Through studying the works of relationship experts such as John Gottman, Ungerböck came to realize that the skills that go into a being a good leader and family member are not that different.

“I used to always compartmentalize. I behaved one way at work, and I’m very different at home,” Ungerböck said. “What I found is we can actually bridge the gap and have a language that works at both. The language of leadership drives increased connection, commitment and growth, both at work and at home.

“The biggest insight that I found coming out of this is that better bosses make better parents.”

Ungerböck came up with two sets of 10 statements – The Leader’s Creed and The Father’s (or Mother’s) Creed – that he challenges leaders to pose to their employees and parents to their children. They’re supposed to ask their employees or children to rate how well they adhere to the statements on a scale of 1 to 10 and use it to inform how they can be better leaders or parents.

Examples of the statements include “I appreciate, acknowledge and encourage you,” and “I listen when you speak. I listen to your words and for the need behind your words.”

The interesting thing, Ungerböck said, is that nine of the 10 statements on the two lists are the same.

“Wouldn’t it be good things for us as leaders in families or leaders in organizations to ask the people under our care how we’re doing on these simple statements?” said Ungerböck, who will also deliver a July 24 talk at the Blanche M. Touhill Performing Arts Center. “By asking what can I start or stop doing, we’re driving people to give us behavioral changes that we can make.”

Ungerböck had worked for his father and, when Ungerböck became CEO, he found that he was unconsciously grafting his father’s leadership style into his own practice. And his father, while successful, tended to lead with a critical eye.

“I was challenged to stop practicing what I call lazy leadership,” Ungerböck told host Jeremy Goodwin in a June 3 appearance on “St. Louis on the Air” on St. Louis Public Radio | 90.7 KWMU. “It’s very easy to tell people what they did wrong. If you want to change someone’s behavior, it’s much more difficult to think about how you can create a situation where you can catch them doing something right. Leading with fear versus positive encouragement, positive encouragement wins.”

Ungerböck led one of five sessions at UMSL’s annual Staff Enrichment Day. The other sessions were:

Staff members were also invited to partake in a sampling of food trucks and a resource fair outside of the Recreation and Wellness Center.