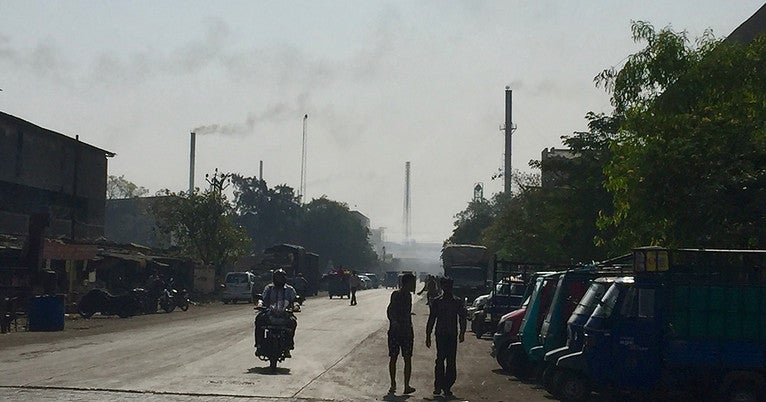 In collaboration with researchers from Yale’s Economic Growth Center, the Indian state of Gujarat has launched the world’s first emissions trading system for particulate pollution — soot, smoke, dust, and other solid and liquid particles that are hazardous to human health.

The new system could provide a model for the rest of India and the world as a means of reducing air pollution and facilitating economic growth, the researchers said. It is a market-based system where the government sets a cap on emissions of particulate matter and allows industries to buy and sell permits in order to stay below the cap, similar to the policy that successfully reduced acid rain in the United States in the 1990s.

“Gujarat’s adoption of emissions trading shows great leadership and innovation in environmental regulation,” said Nicholas Ryan, assistant professor of economics at Yale and a member of the research team. “I expect this model of local trading to address local environmental concerns will be widely replicated. Emissions trading can help bring down pollution at a reasonable cost, so this kind of environmental regulation can succeed for regulated plants and for the public.”

The emissions trading system is being piloted in the city of Surat, a densely populated industrial center in western India where textile and dye mills release significant amounts of air pollution. The first market-based approach to regulating pollution emissions in India, the pilot project is aimed at reducing air pollution at a low cost to both government and industry and setting best practices for replicating trading schemes for other emissions.

“With this program, we are kicking off a new era of cleaner production, while lowering industry compliance costs and rewarding plants that cut pollution in low-cost ways,” says Rajiv Kumar Gupta IAS, chair of the Gujarat Pollution Control Board (GPCB). “We believe using this market-based system will prove that rapid economic growth, ease of doing business, and breathing clean air can all be achieved at the same time.”

The GPCB is administering the emissions trading program with the help of a team of researchers, including Ryan and Rohini Pande, the incoming director of Yale’s Economic Growth Center, as well as Michael Greenstone and Anant Sudarshan of the Energy Policy Institute at the University of Chicago (EPIC), and researchers from The Abdul Latif Jameel Poverty Action Lab. The team is evaluating the program’s benefits and costs, relative to the status quo, using a randomized controlled trial.

Cap-and-trade systems have been used around the globe to reduce other forms of air pollution, including programs in the United States that significantly lowered levels of sulfur dioxide and nitrogen oxides — primary components of acid rain. But the Gujarat program is the first to regulate particulate air pollution, which predominantly is caused by burning fossil fuels. Long-term exposure to high concentrations of particulate pollution takes years off of people’s lives, according to the Air Quality Life Index (AQLI), a tool produced by EPIC that calculates how the particulate pollution levels affect life expectancy. The AQLI calculates that life expectancy in India would increase by 4.3 years if the country’s air met guidelines set by the World Health Organization.