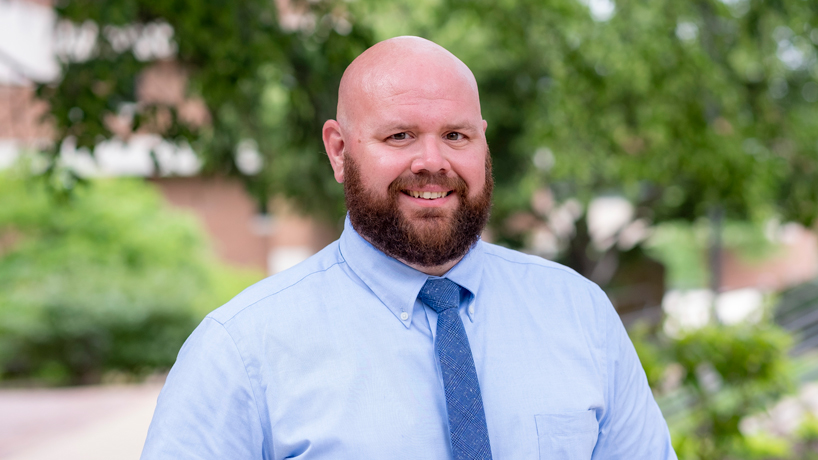 Jason Salzman’s education from the College of Business Administration helped him transition from being an outdoor technician to a comfortable position as an IT sourcing analyst for Save A Lot. He started two days after graduation and has been growing in the role ever since. (Photo by August Jennewein)

Jason Salzman was ready to get out of the elements.

The long hours exposed to Missouri’s erratic weather, physical strain of six-day workweeks and emotional toll of a stalled career were wearing on him. So the outdoor technician hungered for a new profession – one that would pull him inside and provide the intellectual challenge he craved.

This search for change, he decided, should start with an education.

“I honestly didn’t see a future where I was at,” Salzman said. “I was looking for other careers and to try something different. I’m 37 years old and just now really starting my professional career, but I’ve been able to propel myself to where I want to be.”

A BSBA from the University of Missouri–St. Louis has helped him get there.

Salzman graduated with an emphasis in supply chain and analytics in December and has since become an information technology sourcing analyst for Save A Lot.

In his role, which he started a mere two days after graduation, Salzman negotiates contracts and helps acquire the resources needed by the IT business unit. It’s a fast-paced, flexible position that he’d been eyeing since UMSL’s fall career fair.

“It’s worked out perfectly,” he said. “I wanted to make sure that I put my education to use. The job has really blossomed into something that’s been fun and interesting.”

While he’s found a natural fit in supply chain, Salzman wasn’t even aware of the career field when he decided to earn his degree. He signed up for UMSL Day in 2016 hoping to learn more about the joint engineering program. But a simple conversation and a connection he developed with James Campbell, chair of the supply chain and analytics department, helped guide him toward the industry.

Through the field of study, Salzman discovered multiple career paths and a vast network. He expanded on these opportunities by joining UMSL’s Supply Chain Club and a mentorship program available through the Regional Business Council.

“I see the value of supply chain every day in my company,” said Salzman, who also minored in transportation studies. “When we sit down and look at what our department has saved the company, you have a clear visual. You were part of that. You see that the company has the means to grow more and more. I will definitely keep going with this work and climb my way up.”

He’s even looking to continue his education with a master’s degree in supply chain, which he hopes to start in 2020.

Salzman is excited by the idea of continuous learning, but he’s quick to recount the challenges of earning his bachelor’s degree. He continued working as a full-time technician during his undergraduate years while also raising three young kids. He credits his wife, coffee and a persistent attitude for helping him through.

“It’s very hard to further your education while working full time and having a family,” Salzman said. “It honestly cannot be done without a good support system. My wife was in my corner, and she probably got just as emotional as I did when I walked across the stage.”

Salzman’s children also aided his education. He would often complete homework at the kitchen table alongside his eldest daughter, who is now 8. When those study sessions weren’t long enough, he continued working until midnight and then woke up at 4 a.m. to crack open his textbooks again.

“At the time, I wanted to quit and give up,” he said. “But I realized that I’ve come so far. My kids saw all of the hard work. You just keep your eyes on the prize and keep going.”