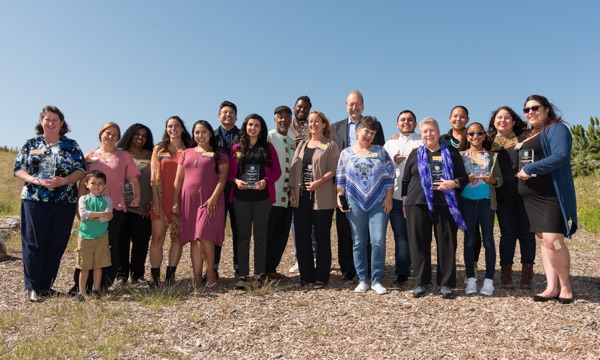 The 2019 Chancellor’s Achievement Awards for Diversity were presented June 3 during a reception at the Cowell Hay Barn. (Photos by

Distinguished Professor Bettina Aptheker received the lifetime achievement award. As a scholar-activist, Aptheker has a long history of engagement in movements for social justice, peace, racial justice, and against violence against women in its myriad forms, and for LGBT rights.

Award recipient Nick Mitchell is an assistant professor of Feminist Studies and is also a core faculty member in the Critical Race and Ethnic Studies. His research and teaching stem from a simple premise: people need a more complex vocabulary for talking about the relationship between knowledge, power, and institutions.

UC Santa Cruz honored the commitment to diversity and inclusion by staff, faculty, and students through the 2019 Chancellor’s Achievement Awards for Diversity.

The awards were presented June 3 during a reception at the Cowell Hay Barn. In opening remarks, Chancellor George Blumenthal said having an inclusive campus is more than just a worthy goal.

“Promoting understanding, taking the time to create a community that values differences, and recognizing the unique contributions of all people enriches us as individuals and as a campus,” Blumenthal said. “We are stronger when all members of our community feel respected, feel empowered, and feel valued.”

This year’s award recipients are:

Distinguished Professor Bettina Aptheker has been teaching at UC Santa Cruz since 1980, when she was a graduate student in the History of Consciousness. She received her doctorate in 1983.

Teaching in what was then called “Women’s Studies,” Aptheker developed a very popular class called Introduction to Feminisms, which she taught every fall for about 30 years, and which had an enrollment of between 400 and 500 students. The class was taught from an antiracist perspective, and looked at the ways in which gender, race, class, and sexuality are interrelated as systems of domination.

In fall 2009 she developed a new large lecture course, Feminism & Social Justice, and taught it until her retirement in June 2018.

In the early 2000’s she served on CAAD (the Committee on Affirmative Action and Diversity), and then chaired it. As a scholar-activist, Aptheker has a long history of engagement in movements for social justice, peace, racial justice, and against violence against women in its myriad forms, and for LGBT rights.

Nick Mitchell’s research and teaching stem from a simple premise: people need a more complex vocabulary for talking about the relationship between knowledge, power, and institutions. He is trained in critical theory, feminist theory, and black radical thought. He served as a founding coordinator of the Black Cultural Studies Research Cluster and the Critical Race and Ethnic Studies Graduate Collective.

Mitchell is an assistant professor of Feminist Studies and is also a core faculty member in the Critical Race and Ethnic Studies program. He received his Ph.D. from the History of Consciousness Department in 2011. Since returning to UCSC as faculty in 2015, Mitchell has continued to work in tandem with faculty and students to build the Critical Race and Ethnic Studies Program, which houses one of the fastest growing majors on campus.

Katherine L. Canales-Molina is associate director of SOMeCA, the acronym for SOAR/Student Media/Cultural Arts and Diversity, which is dedicated to helping student organizations campuswide.

She is a first-generation graduate who found her passion for work in higher education through her involvement in various organizations during her time at UCSC as an undergraduate.

Campus organizations create and produce hundreds of projects/initiatives each year that promote diversity and representation on campus. From festivals to educational forums, journals, cultural programs, and social gatherings, these projects and initiatives engage the campus community in activities and discussions on ethnicity, cultural identity, gender, and sexual orientation. Canales-Molina has been key to the quality, quantity, and longevity of these projects and initiatives.

Sue Matthews is associate vice chancellor for Colleges, Housing, and Educational Services, overseeing student life, university housing, dining, and more. She has been on campus since 1999 in progressively responsible capacities, all of which have supported student development and growth.

Those who nominated Matthews noted that she diligently works to ensure all students feel welcome at UCSC and that they experience a real sense of belonging in their living and learning communities. Matthews has been involved with creating the new reflection space on campus, supporting undocumented students, providing help to homeless students, and more.

Student Sareil D. Brookins is an advocate for social justice, inclusivity and equity. She will soon graduate with two bachelor’s degrees, one in intensive psychology and the other in critical race and ethnic studies with an emphasis in the African diaspora.

Brookins was born and raised in Sacramento, and she notes that she’s had wonderful family support throughout her undergraduate journey.

Most of her outreach work has been done through SOAR, specifically the student-initiated outreach program for prospective ABC-identified students and students of color.

She is dedicated to ensuring that underrepresented communities are heard, and that their concerns are addressed. One of the many issues she has tackled is the stigma of mental health within different communities.

Saugher Nojan is a Ph.D. candidate in sociology with an emphasis in critical race and ethnic studies. She received her master’s in education at UC Santa Cruz and her B.A. in sociology at Sacramento State.

Nojan’s research lies at the intersections of race, religion, immigration and education. She is also an incoming fellow for the UC National Center for Free Speech and Civic Engagement.

She has been deeply involved in the evaluation of projects funded in support of recruitment, improving graduation, and time to degree for historically underrepresented and underserved undergraduate students on campus.

SACNAS, the Society for the Advancement of Chicanos and Native Americans in Science, is a community of scientists that provides students with the opportunity to grow as individuals, professionals, and as scientists.

The campus SACNAS chapter provides a variety of workshops geared toward professional development, graduate school, community outreach, and personal advancement. It has been active for 10 years now.

Chapter leadership is a mix of graduate students and undergraduates, providing a bridge to various STEM communities.

The mission of the Services for Transfer and Re-Entry Students, or STARS, is to provide culturally responsive support to students who have been historically marginalized in the education system.

This includes transfer, re-entry, veteran and re-admitted students, as well as students who do not have traditional family support due to experiences with the foster care system, homelessness, incarceration, or other factors. STARS works with and for underrepresented students to close equity gaps they experience related to access and education.

The group’s success was particularly evident this year with the campus reaching its goal to boost the number of transfer students we accept from California community colleges, which was sought by UC’s Office of the President.

Women in Science and Engineering Award

Lise Getooor not only serves as an example and inspiration for women in science and engineering, she embodies great mentorship and leadership qualities that she has tirelessly applied to guide and support women throughout her career.

Apart from directly advising and mentoring female students as their principal adviser, Getoor has participated on the thesis committees of numerous female students.

Those who nominated Getoor called her an exceptional mentor, an inspiration whose support proved invaluable. They also noted her caring and generous spirit that extended well beyond academic achievement.

Getoor, a professor in computer science and director of the D3 Data Science Center, arrived at UC Santa Cruz in 2013.