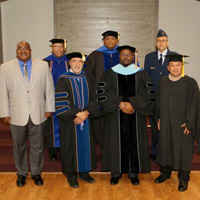 More than 1,000 guests from Texas and throughout the country were on hand to celebrate  graduates who had completed a master’s degree, a master’s certificate, or both.

Commencement 2019 around the World

The graduates in San Antonio are part of Webster University’s Class of 2019 worldwide graduating class of 5,000 graduates, ranging in age from 19 to 72, and representing 101 countries across the globe. Of these graduates, 45 are currently stationed overseas with the U.S. military.