One of the keys to quickly diagnosing anti-malarial drug resistance — potentially saving lives — lies in testing whole blood instead of extracting DNA, eliminating processing steps that can take hours or days. A team of Vanderbilt University biomedical engineers cracked the code to doing just that and are working on applying the method to help patients with HIV, tuberculosis and a host of other diseases.

Mindy Leelawong, research assistant professor of biomedical engineering, said the problem of drug-resistant malaria is prevalent in Southeast Asia and may spread to Africa and beyond. Doctors currently can tell whether powerful malaria drugs will work on someone or not through polymerase chain reaction (PCR), or a DNA duplication method that allows for optical detection of a disease’s biomarkers with only a sample. However, they formerly had to extract the malaria parasite’s DNA first, virtually impossible to do in rural, low-resource areas.

Leelawong and her team took on issues preventing a whole-blood test one at a time until they hit upon two major changes that would work: reinventing dyes typically used in PCR so that they’re more compatible with blood and adding a different type of DNA to the PCR process that allows doctors in the field to see individual mutations. In a new study, they have analyzed a single mutation in a malaria parasite from a single drop of whole blood.

“In my global health work, it was frustrating to collect pinprick samples on paper in the field, ship them back to a central laboratory and then wait,” said Leelawong, who has worked in Zambia and Peru. “There would be hundreds of blood spots stored in a freezer somewhere, awaiting people to sit down and do the DNA extraction process, while patients needed answers. I wanted to eliminate the paper and the bottleneck.” 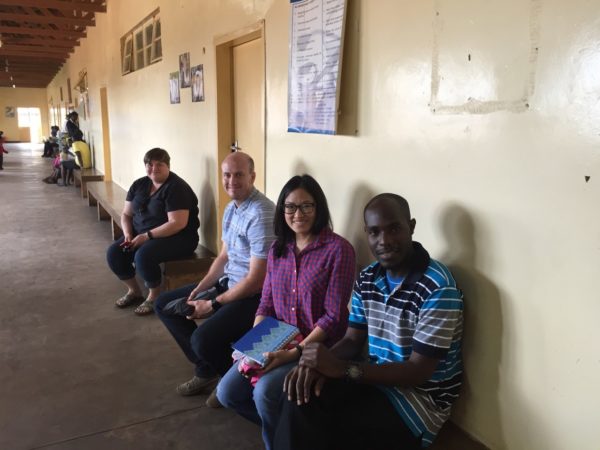 She worked with Frederick Haselton, professor of biomedical engineering, and Nicholas Adams, research assistant professor of biomedical engineering, inventors of an adaptive PCR machine that simplifies the DNA extraction process by using left-handed DNA to monitor and control the molecular reactions that take place during PCR. With their shoebox-size machine and Leelawong’s method, detecting malaria drug resistance requires only a tiny sample tube, a laptop and a power source.

“In the past, it was easier to use adaptive PCR on clear bodily fluids, because this is an optical technique,” Haselton said. “What Dr. Leelawong has done is extend this basic technology to blood so that we don’t have to do extraction methods for the molecular materials, where we can see biomarkers of infectious disease encoded in certain DNA segments.”

He said the technique can be modified to assess resistance to artemisinin, a common and powerful anti-malaria drug, and future drugs. David Wright, Stevenson Professor of Chemistry and an expert in the diagnosis and spread of malaria, said it’s vital work.

“We need to know the geographic location of these parasites and ensure they don’t spread,” he said. “We know from previous generations of drugs that the consequences can be catastrophic.”

Malaria is a serious and sometimes fatal disease caused by a parasite that commonly infects a certain type of mosquito that feeds on humans and infects red blood cells. People who contract malaria typically become very sick with high fevers, shaking chills, and flu-like illness. According to the World Malaria Report, there were 219 million cases of malaria globally during 2017, resulting in 435,000 malaria deaths. Although anti-malarial drugs are often effective, outcomes are worse for those who are drug resistant.

Their work is outline in the article “Detection of Single Nucleotide Polymorphism Markers of Antimalarial Drug Resistance Directly from Whole Blood,” which will appear in the July issue of The Journal of Molecular Diagnostics, published by Elsevier.

This work was supported by National Institutes of Health grant R42 HG009470-02 and the NIH-funded Vanderbilt Network for Innovation in Global Health Technologies D43TW009348.