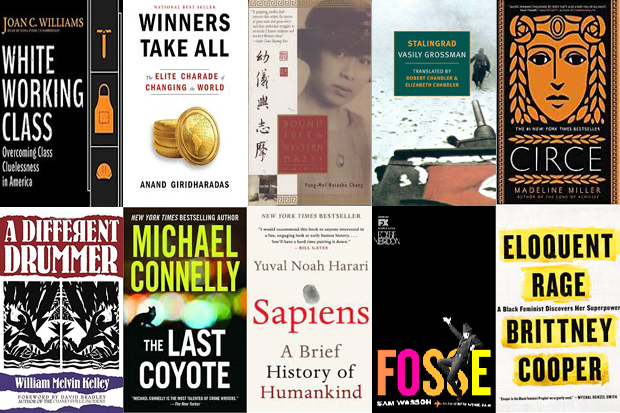 The beach chair, the park bench, the porch swing beckons: whatever summer setting you find yourself in, it goes better with a good book. BrandeisNOW asked university faculty and librarians for summer reading recommendations, and they offered a diverse array of options:

The New Yorker had an article about it a year ago, called “The Lost Giant of American Literature.” It’s an amazing book, and was recently reissued with The New Yorker piece as a preface. It’s contemporaneous with “To Kill a Mockingbird,” and probably as good.  But it’s also more original and challenging. If “To Kill a Mockingbird’s” moral is, ultimately, “All lives matter,” “A Different Drummer” is much closer to Black Lives Matter — even to the whites, racist or not, for good and for evil, who may think that they don’t. To say more would be to reveal spoilers: read it and be amazed. -William Flesch, professor of English

Circe is an amazing retelling of certain episodes from the Odyssey, seen from below, in a way that brings the female characters to the fore and gives them an unaccustomed voice. (Listen to Miller’s interview with Brandeis professors Gina Turrigiano and John Plotz)

“Normal People” unpacks all the woes and also some of the joyful absurdity of “making it” up to university for not-so-normal teenagers out of small-town Ireland—in the age of Facebook and seamier manifestations of social media. -John Plotz, professor of English

Grossman published an expurgated version of “Stalingrad” as “For a Just Cause” in 1952. Grossman is best known for his magnificent novel “Life and Fate,” the manuscripts of which were destroyed by the KGB in the Soviet Union in 1960, but a hidden copy was smuggled to the US in 1980, and it was published in English translation here, almost twenty years after the author’s death. “Life and Fate” is a dark masterpiece, which unflinchingly renders brutality of the German invasion and the harsh double-binds of Soviet repression. “Stalingrad” is the first half of the story told in “Life and Fate” with all of the main characters and many of the minor characters of the later novel. Story lines that seem separate in “Life and Fate” are tied together in “Stalingrad,” and the back stories of the characters that one discovers in “Stalingrad” are at the same time illuminating and surprising. “For A Just Cause” been ignored in the west because it was assumed to be Stalinist propaganda, but the original novel, in its emotional and political depth, and in its surprising lyricism, is a worthy companion to “Life and Fate.” -John Burt, professor of English

“The Last Coyote” by Michael Connelly

If you are not a crime novel fan, then this is not for you, but if so, this will fill a few hours in the shade on a summer day. Harry Bosch is a complex LAPD detective that gets knocked down but keeps getting up.

The Library: A Catalogue of Wonders by Stuart Kells
Libraries are magic spaces that preserve the output of a complex society and cultural wealth. The Library is a celebration of books as objects, a celebration of physicality of books and bookish space. -Matthew Sheehy, university librarian

“Sapiens” by Yuval Noah Harari, and “Thinking fast and slow” by Daniel Kahnemman

“Eloquent Rage: A Black Feminist Discovers Her Superpower” by Brittney Cooper, and “She Has Her Mother’s Laugh: The Powers, Perversions and Potential of Heredity” by Carl Zimmer

New books continue to correct false narratives on race in America and around the world. Brittney Cooper tells personal stories, bares her soul, opens wounds and finds power. Carl Zimmer reminds us of who we are, rooted in history and science. Zimmer weaves together the genome, stories about biology, eugenics, epigenetics, and CRISPR gene editing technology. One could readily be depressed at the end of finishing these and similar texts but as Cooper recommends at the end of her book, “May you have joy. May you have gut-busting belly laughter, every day. May you ask more and better questions. May your rage be a force for good. You got this. We got this.” -Maria Madison, Associate Dean for Equity, Diversity and Inclusion at the Heller School

“Winners Take All: The Elite Charade of Changing the World” by Anand Giridharadas

This influential book may change the way you think about social impact.  It looks at how “band-aid” efforts to mitigate pressing social problems may actually impede social progress by derailing more systemic change. -Carole Carlson, Director of the Social Impact MBA Program at the Heller School

“Fosse,” the biography of choreographer and director Bob Fosse by Sam Wasson

Wasson very elegantly traces Fosse’s story from his first dance lessons as a child to his glory days on Broadway to his movies Cabaret and All that Jazz. His legendary drive and his mastery of “the art of not taking no for an answer” really were evident from a young age. The slither and crackle of Wasson’s prose will make you want to have a Youtube window open so you can check in with Fosse and his dancers as you read. -Ingrid Schorr, director of the Office of the Arts

“The Soul of the Stranger: Reading God and Torah from a Transgender Perspective” by Joy Ladin

“Joy Ladin is our finest writer on transgender issues, and “The Soul of the Stranger” is her best book. In it she examines her profound faith in an invisible but undeniably present God from a trans perspective, and finds wisdom, understanding, and love.  A must-read for anyone who wishes to be touched by both the eternal divine as well as the humbly, miraculously human.” – Jennifer Finney Boylan, author of “She’s Not There” and “Long Black Veil”

“The Donigers of Great Neck: A Mythologized Memoir” by Wendy Doniger

“Whether factual or mythological, it’s a story, driven by passion, tension, and an engaging voice, that ultimately renders the Donigers vivid on the page.” – New York Times

“The Eddie Cantor Story: A Jewish Life in Performance and Politics” by David Weinstein

“David Weinstein manages to make the story of Eddie Cantor’s career timely, instructive, and really rather remarkable…This reconsideration of the career of Eddie Cantor provides an unexpected look at a pioneer in the art of being publicly Jewish. As the old saying goes, ‘Try it, you’ll like it.’” – Jewish Book World

“Lost Library: The Legacy of Vilna’s Strashun Library in the Aftermath of the Holocaust” by Dan Rabinowitz

“Dan Rabinowitz has done a brilliant job in his moving and important book. Through the story of the Strashun Library, he gives us insight into the richness and vibrancy of Jewish life in Vilna. He vividly portrays the restoration of the books of the Strashun Library, a testimony to the indomitable Jewish spirit.”  –  Ambassador Stuart E. Eizenstat, Special Representative of the President and Secretary of State on Holocaust-Era Issues (1993-2001), and author of “Imperfect Justice: Looted Assets, Slave Labor & the Unfinished Business of World War II.”