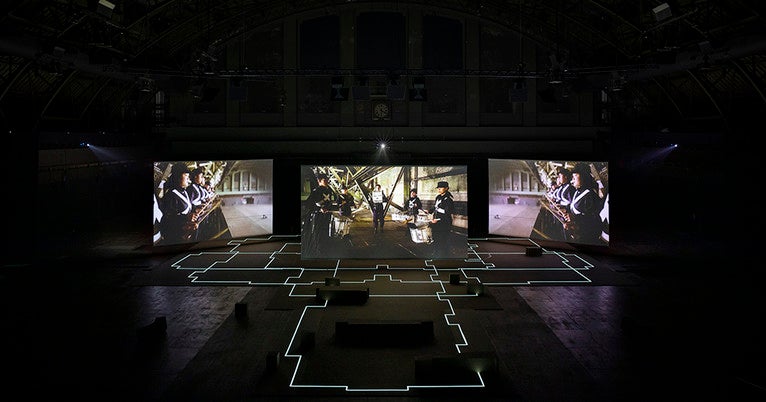 Hito Steyerl, a Hayden Distinguished Fellow at the Yale School of Art in both 2018 and 2019 as well as an acclaimed filmmaker, writer, and cultural critic, opened a new exhibition on June 20 at the Park Avenue Armory in New York City titled “Drill”.

Organized around a newly commissioned three-channel video installation, the project features performances by the Yale Precision Marching Band (YPMB) — one of many Yale collaborations born out of Steyerl’s fellowships at the School of Art.

The show’s titular work occupies the entirety of the Armory’s Wade Thompson Drill Hall. Over the course of its 21 minutes the film weaves together a narrative that connects the history of the Armory building with the increasing militarization and gun violence in the United States. While it’s now a thriving nonprofit space for art and performance, the Park Avenue Armory originally served as the headquarters for the Seventh New York Militia Regiment in the 19th and 20th centuries, and it’s where the National Rifle Association — the nation’s largest gun rights organization — adopted its articles of association in 1871.

Steyerl’s film features public historian and Yale doctoral candidate Anna Duensing offering viewers a tour of the very building they sit in while gun violence victims and activists share their experiences. Video and audio of the YPMB marching and performing original music based on the sonification of gun violence statistics harkens back to the Drill Hall’s original purpose.

The first piece is based on the number of deadly incidents involving AR-15s, and another charts the increase in gun manufacturing since the late 1980s. The final song, “Mass Shootings: 1999-2018,” uses the Mother Jones Mass Shooting Database to trace the modern era of mass shootings beginning with Columbine, with each note of the melody representing a distinct mass shooting as the pitch indicates the number of casualties and a pedal tone marks the passing of each month.

In an artist talk Steyerl gave at the School of Art last spring, she described the music for “Drill” as a “symphony of creative destruction,” but this installation is just one of eight by Steyerl that comprise the exhibition as a whole. Working at the intersections of visual art, film, theory, and critique, her investigative practice examines the dissemination and decay of digital images, how money and power affect the art market, and the roles that developing technologies 21st-century capitalism play in our evolving cognizance and ethics. This is the most extensive presentation of Steyerl’s work in the U.S. to date. “Drill” runs through July 21.