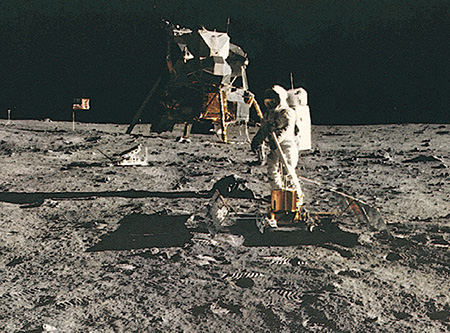 The retro-reflector array can be seen in this NASA photo in front of the lunar module, between the flag and the astronaut, who is placing a seismograph on the lunar surface.

The Shane Telescope at Lick Observatory was used to fire a powerful laser at the moon and detect the signal returned from the retro-reflector array placed on the lunar surface by the Apollo 11 astronauts. (Photo by Laurie Hatch)

In this photo of the KORAD laser firing from beneath the Shane Telescope at Lick Observatory, astronomer Joseph Wampler can be seen at the monitor in the background guiding the telescope. (Photo courtesy of Joe Wampler)

The first precise measurement of the distance from Earth to the moon was achieved on August 1, 1969, in a landmark experiment involving Lick Observatory astronomers and the Apollo 11 astronauts.

To commemorate this achievement on its 50th anniversary, a bronze plaque in the lobby of the Shane Telescope Dome at Lick Observatory will be dedicated on Thursday, August 1, as part of the IEEE Milestones Program, which honors significant technical achievements and innovations in electronics and computing. (The event is by invitation only due to space limitations.)

Researchers used Lick’s 120-inch Shane Telescope to fire a powerful laser at the moon and detect the light that bounced back from a retro-reflector array placed on the lunar surface by the Apollo 11 astronauts. By precisely timing the delay between short pulses of light from the laser and the return signals from the moon, the researchers were able calculate the distance with unprecedented accuracy.

By the time a laser pulse reached the moon, its light was spread out over an area about 2 miles in diameter, so the amount of light that came back to the telescope from the small (18 by 18 inches) reflector array was just a few photons.

“It was a big technological feat to detect such a small signal,” said Elinor Gates, staff astronomer at Lick Observatory. “At the time, our Shane Telescope was the second largest in the world, and that gave Lick an advantage for detecting the signal.”

Joseph Wampler, now a professor emeritus of astronomy and astrophysics at UC Santa Cruz, coordinated the experiment for Lick Observatory. The team at Lick overcame numerous technological challenges to get the Lunar Laser Ranging Experiment (LURE) to work. Wampler recalled that the agreement with NASA to use the Lick facilities happened in February 1969, leaving little time to prepare before the Apollo 11 mission in July.

To accommodate the lasers, their optical benches, and the telescope guiding system, a pit was dug below the Shane Telescope and lined with tile. The tiled pit is still there, known to Lick astronomers as “the swimming pool.” Parts of the mirror system for directing the laser beams are also still installed on the telescope.

According to Wampler, NASA was worried that when the Apollo astronauts left the moon, their rocket exhaust would leave the retro-reflector array covered with dust. Therefore, several teams were funded to try to detect it during the few hours that the astronauts remained on the moon after deploying the array. Two teams using different laser systems were working at Lick Observatory, and other teams were working at the McDonald Observatory in Texas and the Mount Haleakala Observatory in Hawaii. It soon became apparent that Soviet scientists were also trying to hit the LURE target with their own laser.

The initial attempts were frustrated by a number of problems, including the moon’s position low on the horizon. Also, the high-powered ruby-crystal laser systems were prone to catastrophic equipment failures, complete with explosions and fried electronics. The first successful signal detection was achieved on August 1 using a KORAD laser system. Just a few days earlier, an equipment failure had sent Hal Walker, KORAD’s field operations manager for the project, driving 350 miles from Mt. Hamilton to KORAD’s labs in Santa Monica to get replacement parts.

Gates, who will lead a tour of the Shane Telescope after the dedication of the plaque, said the LURE experiment was one of the first pieces of history she learned about when she started working at Lick Observatory 20 years ago. “Lick’s successful part in the Apollo 11 mission is a point of pride, even for those of us who are too young to remember the moon landing,” she said.

At Lick, the laser ranging activities ended in August 1969, but observations have continued at other observatories, and subsequent Apollo missions (14 and 15) deployed additional retro-reflector arrays on the moon. LURE is the only Apollo experiment that is still returning data from the moon.

In addition to the first precise measurements of the distance to the moon, these experiments have provided important information about the moon’s orbit and variations in its rotation, as well as improving our knowledge of continental drift, changes in the Earth’s rotation rate, and the precession of its spin axis.

After the plaque dedication, a reception and talks will be held in Santa Clara, where Michael Bolte, professor of astronomy and astrophysics at UC Santa Cruz and former director of UC Observatories, will discuss Lick Observatory’s role. Hal Walker will talk about his role in the experiment in a conversation with Seth Shostak of the SETI Institute.

The Institute of Electrical and Electronics Engineers (IEEE) History Center administers the IEEE Milestones Program. In addition to the plaque at Lick Observatory, the program will install a pedestal-mounted plaque in Santa Monica at the site where KORAD Lasers developed the ruby-crystal laser that was successfully used at Lick.