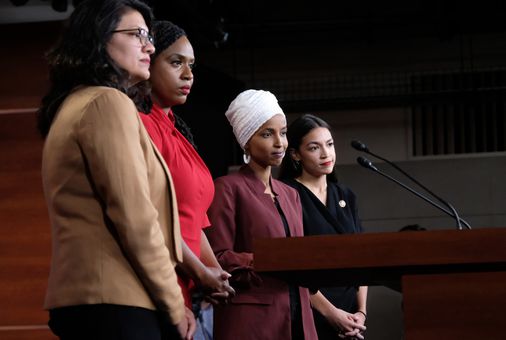 “Change can’t wait,” some remember Pressley said that night, repeating her campaign slogan. In primaries and in the mid-term general election five months later, voters ushered in the most diverse class of first-term lawmakers in the history of the House. And at the center of that group was the Squad: Pressley, Ocasio-Cortez, Rashida Tlaib of Michigan and Ilhan Omar of Minnesota.

The four — who each shattered a glass ceiling, learned to navigate the halls of Congress, and faced racist attacks by President Trump — have become a case study in the influence of new media and of a movement that pushed women, women of color, and working-class people to run for office. Now they face the question of how to wield the power amplified by Trump’s focus and their own massive online followings and translate it into policy.

“The work that we are doing of movement and coalition building, of disrupting status quo paradigms in how we govern, in how we engage, in how we ran and won our election is bigger than four people,” Pressley said in an interview. “This was something created by community.”

Before they dubbed themselves the Squad, the four, ranging in age from 29 to 45, connected online and off, telling their stories through their own social media channels. Tweets and Instagram posts, plus interviews with Pressley and Tlaib and with close associates, show tight-knit relationships that emerged organically but that they say have intentionally centered on the “shine theory.” Coined by writer Aminatou Sow, the phrase is based on the idea that “I don’t shine if you don’t shine” and that people, women especially, should collaborate rather than compete.

A connection was clear between Pressley and Ocasio-Cortez from the start. “I do think our stories are very similar,” Pressley said later at the fund-raiser, placing a hand on Ocasio-Cortez’s back, according to a short video clip she posted on Twitter the next day. “So I can’t wait ‘til we win and go start our own caucus.”

They grew close through their shared experiences as women of color running insurgent primary campaigns. Pressley dispatched a field organizer to turn out voters for Ocasio-Cortez in the final days of her primary. After Ocasio-Cortez won, pulling off a dramatic upset against fourth-ranking House Democrat and 10-term incumbent Joe Crowley, she sent volunteers from the Bronx to Boston to help Pressley campaign and made a stop that summer at a fund-raiser for Tlaib.

A few days after Tlaib won her Democratic primary in August, she paid it forward, posting a series of photos of her and her team knocking on doors for Omar in Minneapolis.

If they were miles apart, the congresswomen and their supporters say, they kept a close eye on each other’s uphill races and the progressive stances they shared in liberal, fairly diverse districts — or as Tlaib put it in an interview, the “joys and the pain of a unique walk that can be very lonely.”

All campaigned on increasing access to health care and improving education, addressing a widening income gap that hurts working families, and standing in strong opposition to Trump administration policies that have stirred fear and anxiety among African-Americans, Muslims, refugees, and other immigrants in their communities. And all went on to overwhelmingly win on election night in the general election — with videos of their victory parties on their social media streams beamed into living rooms nationwide.

It was in November, during a congressional orientation for progressive House Democrats, that the four congresswomen grew tight and gave themselves the nickname the Squad – Internet slang with roots in hip-hop that defines a group with a sense of solidarity.

On that day, they had stepped out for an interview with the nonprofit VoteRunLead, which trains women to run for office. The talk was live-streamed via Facebook.

Even then, a little nervous before the camera at first, the four incoming representatives grappled with how to define the priorities that bound them without giving short shrift to their historic congressional wins: Pressley as the first African-American woman from her state; Ocasio-Cortez, the youngest woman ever elected to the House; and Tlaib and Omar as the first Muslim women in Congress.

“This is an incredibly dark time in our country and we know that we brought in some light,” Tlaib told the interviewer then. “We want to celebrate that, but so much of it is because we didn’t want to be on the outside of the ring anymore — we want to get on the inside and for me it’s fighting poverty, it’s fighting against the environmental polluters, and [for] my community.”

Sitting along a table afterward, they took a now-iconic photo that Ocasio-Cortez captioned “The Squad.” An Instagram video from that day stamped with the hashtag, #squadgoals, shows the four wandering a hall together. “Say hi everyone, we out here,” Ocasio-Cortez says, as Pressley chimes in — “Heeey!” — and Tlaib gives a peace sign.

The four continued to bond over their support for policies, such as passing the Green New Deal, eliminating student debt, expanding health care for low-income mothers, and improving the treatment of migrants at the border. Pressley, Ocasio-Cortez, and Tlaib also serve together on two House committees. And they rallied around Omar after she made controversial comments about Israel in February.

Their kinship has been compared to the class of so-called “Watergate Babies,” who were elected after that scandal in 1974 and who helped weaken the power of committee chairmanships. They also have been compared to young Republicans elected in 1994 after campaigning on the “Contract with America” and helping the party take the House majority for the first time in decades.

But those were mostly white men — and none had the power of social media.

All four women in the Squad have been effective at using their online prominence to bring attention to their message and have had an outsized role as first-term lawmakers, political experts said. But a Republican-controlled Senate and Republican president will limit their ability to turn their beliefs into policies.

They also have entered Congress as the Democratic Party is at a generational, ethnic, and racial crossroads. It has yet to decide on a winning 2020 presidential campaign strategy to beat Trump: appeal to moderate voters who helped them recapture the House or to the newly awakened young and minority voters whom the Squad has energized.

“Once a term exists in the world, it gets interpreted and reprinted in so many ways that it can lose its meaning,” said Amber Spry, an assistant professor of politics at Brandeis University in Waltham. “The power that these four representatives do have is to continue shaping that narrative and continue shaping this vision for the public about who the Squad is and who can be included in it and what it can do.”